Broncos QB questions not a `Lock’ yet after Allen struggles 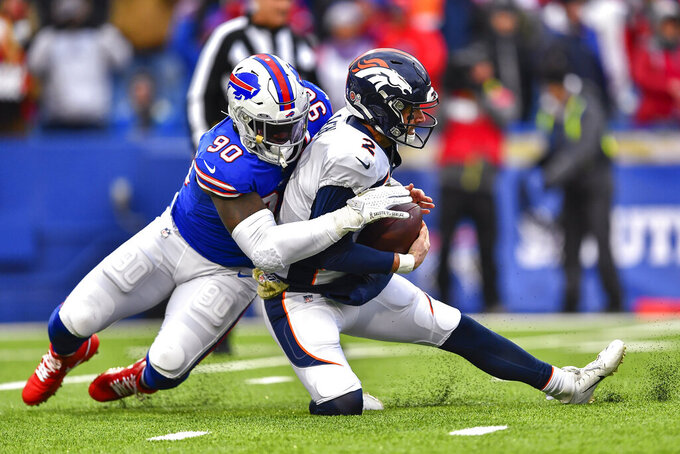 ORCHARD PARK, N.Y. (AP) — Brandon Allen insists he wants to be part of the solution in Denver.

Allen’s future as Broncos starter is once again being questioned after the fourth-year quarterback bottomed out in a 20-3 loss to the Buffalo Bills on Sunday.

Allen completed just three of 14 passes for 4 yards in the second half, and finished 10 of 25 for 82 with an interception in falling to 1-2 since Joe Flacco was placed on injured reserve due to a neck injury.

And the meltdown comes with second-round pick Drew Lock waiting in the wings, ready to return from injured reserve.

“Obviously I want to play,” Allen said. “I want to be part of the solution. That is not up to me, so I’m going to work like I’m going to play next week.”

First-year coach Vic Fangio shrugged off questions regarding a quarterback switch by saying he “hadn’t even thought about it yet.”

And yet, the Broncos’ season is going nowhere after the loss dropped them to 3-8.

The Broncos drafted Lock with the 42nd pick out of Missouri with hopes to groom him behind Flacco. Lock’s development was slowed after spraining his right thumb in August.

Lock has been practicing with the scout team over the past two weeks and is eligible to return until Dec. 3; if he is not activated by then, he will remain on injured reserve for the rest of the season.

Lock’s injury led to Denver claiming Allen after he was waived by the Los Angeles Rams. The only other quarterback on the roster is Brett Rypien, an undrafted rookie out of Boise State who has yet to appear in an NFL game.

On Sunday, Allen oversaw a stunted performance in which Denver managed just 134 yards offense, nine first downs and punted on eight of its 10 drives.

The Broncos’ two other drives ended with Brandon McManus hitting a 45-yard field goal, and Allen being intercepted by Tre’Davious White at Buffalo’s 8. The interception came after Denver got the ball at its 47 following Justin Simmons’ interception of Buffalo’s Josh Allen with 4:03 left in the second quarter.

“At some point there we just stopped moving it totally and they kind of smothered us,” Fangio said. “It was a problem obviously, and one that we need to get rectified somehow.”

Broncos players preferred to tune out the outside noise following the game.

“You kind of block it out. At the end of the day, there’s going to always be some talk any way it goes,” running back Phillip Lindsay said. “When Brandon’s doing well, everybody’s doing good. If something happens with Brandon, everybody wants to get off the bandwagon. That’s how football is.”