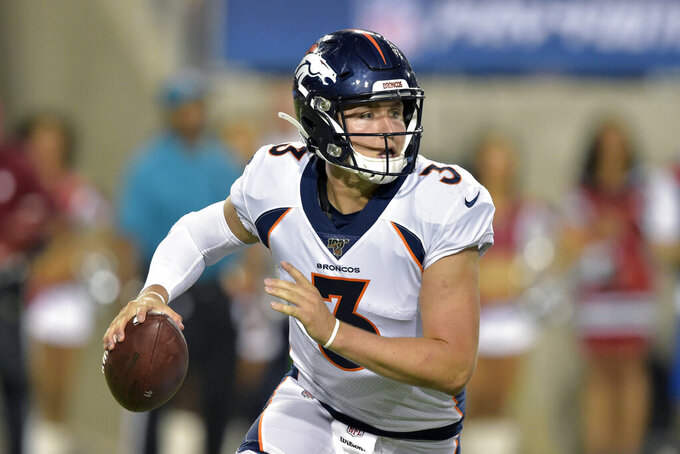 FILE - In this Aug. 1, 2019, file photo, Denver Broncos quarterback Drew Lock scrambles during the second half of the Pro Football Hall of Fame NFL preseason game against the Atlanta Falcons in Canton, Ohio. The Broncos are bringing rookie quarterback Lock back to practice Tuesday, Nov. 12, 2019, to see if he is going to be able to play this season. (AP Photo/David Richard, File)

ENGLEWOOD, Colo. (AP) — Brandon Allen has only been Denver's starting quarterback for one game but in some ways he's already taken a back seat to Drew Lock.

The rookie was sharing first-team snaps with Allen at practice Wednesday even though Allen is preparing for his first career road start this weekend and coach Vic Fangio reiterated how rusty Lock was after being sidelined for three months by a sprained right thumb.

Allen didn't see Lock's return to action as added pressure as he prepares to start at Minnesota on Sunday.

"There's a plan for him and my focus is just sticking to the game plan and trying to get a win this week," said Allen, a waiver wire pickup from the Rams who waited four years to make his first NFL start.

That chance finally came two weeks ago when Joe Flacco (neck) went on IR and Allen beat the Browns 24-19 in Denver in his debut. After the bye, Lock returned to practice Tuesday for the first time since getting hurt in a preseason game against the 49ers on Aug. 19.

"It's like I'm starting my journey back in the NFL all over again," Lock said before Wednesday's workout. "And it feels good to be back out there finally with the guys."

Fangio said Lock looked "OK" and did "fine" in his return Tuesday but acknowledged it's difficult to evaluate a young quarterback when he's running the scout team.

"You can evaluate where he's at physically, but it's not your offense," Fangio said. "We're going to be getting him some snaps with the offense as we go here."

That began Wednesday, when they also saved some snaps for rookie Brett Rypien, who was elevated from the practice squad two weeks ago to serve as Allen's backup.

Lock said he’ll get up to speed quickly.

"Just give me a day or two and I'll feel back to normal," he said.

The Broncos have until Dec. 3 to activate Lock or his season will be over.

If the Broncos part ways with Flacco in the offseason, they get hit with a $13 million cap charge in dead money in 2020 but save $10 million in salary.

The Broncos would love to get a look at Lock in action before heading into the offseason evaluation of free agents and draft prospects. But they won't play him unless they deem him ready to handle it.

Lock will have to show a good grasp of Rich Scangarello's offense, precision passes and good footwork, but there are other factors that general manager John Elway will weigh, including how Allen's playing down the stretch, the standings and an arduous schedule.

The Broncos play four of their next five games on the road. Their next three opponents, the Vikings (7-3), Bills (6-3) and Chargers (4-6) all have top-10 scoring defenses, and it's hard to imagine the Broncos throwing Lock into the mix in road games against division leaders Houston (6-3) or Kansas City (6-4).

"The clear goal is to be activated," Lock said. "I'm not 100 percent sure how they're seeing it, how it's going to work, but like I said, I'm ready for whatever they throw at me and whatever they feel is best for me and best for this team."

Lock stressed that he's not necessarily trying to prove he's the future of this franchise.

Allen’s aim is to show the Broncos he’s their guy: “Sure, I think playing well does that.”

Fangio demurred when asked if the team’s top priority is winning now or developing a quarterback.

"Both," he said. "Obviously, our priority is winning games, but developing players, not just quarterbacks, is always a priority. Brandon's one of those players along with Drew. And again, Drew hasn't done anything. Yesterday was his first time he's been on the practice field since early August.