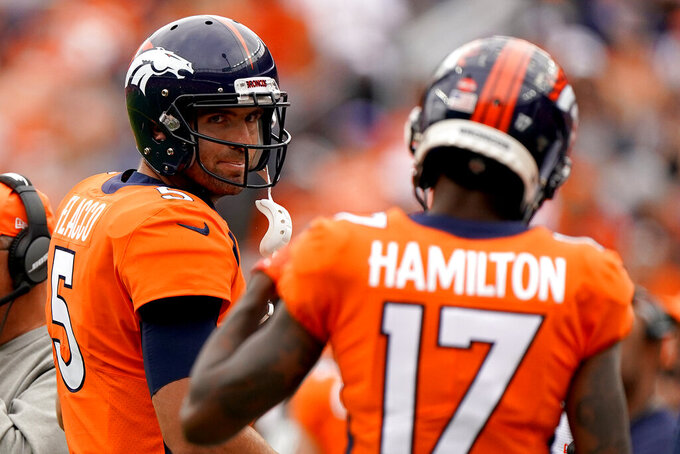 Denver Broncos quarterback Joe Flacco (5) looks at wide receiver DaeSean Hamilton (17) as they walk to the bench after throwing an interception against the Chicago Bears during the second half of an NFL football game, Sunday, Sept. 15, 2019, in Denver. (AP Photo/Jack Dempsey)

DENVER (AP) — What could've been a wild win instead turned into a big-time downer for the Denver Broncos.

All thanks to one tick of the clock.

The Broncos looked as lucky as a team could get Sunday, when they got not one, not two, but three chances at a point-after-touchdown play that they eventually converted into 2 points for a 14-13 lead with 31 seconds left.

But they ended up losing 16-14 on a 53-yard field goal after officials put 1 second back on the clock following Mitchell Trubisky's completion to Allen Robinson II on fourth-and-15.

"I thought we had won," defensive end Derek Wolfe said. "And then I was like, 'Wait, how are they kicking a field goal? The time is out."

It wasn't, and though Broncos fans will spend a week debating whether they got robbed by the refs or their own timekeeper, they'll also have to consider an offense that has mustered two touchdowns and two weeks and a much-hyped defense that has played just well enough to lose.

The loss dropped Denver to 0-2 for the first time since 1999, and the ending is one that will be dissected for a while.

"I've never been a part of something like that," Wolfe said. "That's crazy. That's insane."

Let's start with what transpired with 31 seconds remaining after the Broncos scored on Emmanuel Sanders' 7-yards catch to bring the Broncos to within 13-12. Broncos coach Vic Fangio, who designed the NFL's best defense in Chicago the last four seasons, elected to go for the win and sent in a play for a 2-point conversion.

But then QB Joe Flacco couldn't get the play off in time. The ball was set to be moved back to the 7 yard line.

Change of mind, part I: The Broncos would go for the tie and kick the extra point after the penalty was assessed. Brandon McManus missed a 37-yard try wide right and the Bears began to celebrate.

Only, Chicago defensive back Buster Skrine jumped offsides on the kick.

Change of mind, part II: Fangio decided to go for 2 again, from the 1, and sent the offense back out. Flacco hit Sanders on a short pass to make it 14-13.

But the Bears had ample time and one timeout. With 9 seconds remaining and facing fourth-and-15, Trubisky scrambled and found Robinson in the middle of the field for the first down. Robinson instantly fell to the ground to stop the clock.

However, it read all zeroes and the Broncos faithful began to cheer.

Turns out, it really didn't hit all zeroes as the Bears called their final timeout just before time expired. Eddy Pineiro trotted out and sent the kick through the uprights. He was mobbed by teammates.

The Bears had been looking for a kicker since cutting Cody Parkey following his "double-doink" field goal miss of 43 yards in their 16-15 playoff loss to the Philadelphia Eagles a season ago.

They might have just found their kicker. The Broncos simply found heartache.

"Crazy how we lost that game," Broncos cornerback Chris Harris Jr. said. "We fought hard the whole game to get back and get the lead and to lose it like that? It definitely hurts."

"We put the game in their hands," said Chubb, who was called for a roughing the passer penalty on the decisive drive. "We've got to handle it earlier. We didn't do that. We let it come down to them and they won."

For Flacco, there's only one thing to do — move on.

"When I walk into the building (Monday), I am going to have my head up just as high as I've always had," Flacco said. "Guys see that. Guys respond to that. If I walk into the building and guys see me with my head hanging low, they're going to say, 'Oh yeah, I can feel sorry myself, too.' And the next guy is going to see that and say, 'Oh yeah, I think I should probably feel sorry for myself.'

"There's no feeling sorry for yourself."