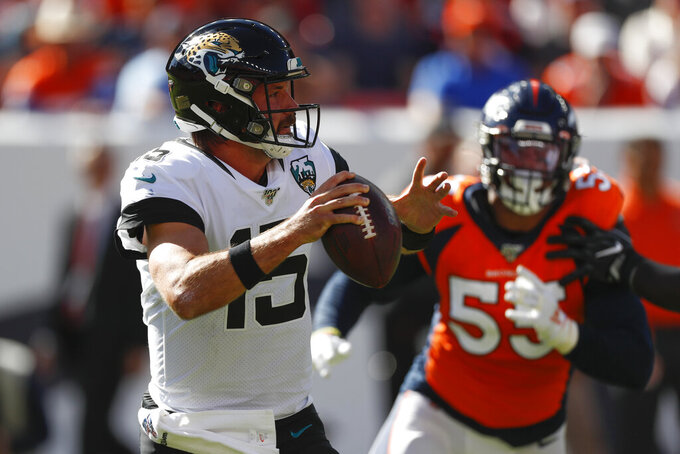 ENGLEWOOD, Colo. (AP) — Money for nothing.

All three are hurt.

All three were inactive Sunday when the Broncos (0-4) matched their worst start ever with a 26-24 loss to Jacksonville that saddled them with their second eight-game skid in the past three seasons.

Since beating Oakland on Oct. 1, 2017, the Broncos have gone 8-24, matching the Jets for the worst record in the league over that span.

Blame Denver's dismal drafts or the musical chairs at head coach or quarterback, but don't forget the Broncos' flops in free agency.

While it's certainly way too early to say if this latest class will fizzle like so many others of late, none of the newcomers have had dazzling Denver debuts.

James (knee) missed major portions of the season with injuries in two of the past four years, so it's no surprise that he got hurt just 10 plays into the opener at Oakland.

Callahan (foot) thrived under Vic Fangio's tutelage in Chicago but he's been out since July and might not make it back until November, and Jackson pulled a hamstring in the rain at Green Bay two weeks ago and hasn't practiced since.

Throw in running back Theo Riddick, whom the Broncos grabbed for one year and $2.5 million in July only to see him knocked out with a shoulder injury in his first preseason action, and the run of tough luck only gets worse.

After luring the greatest free agent ever in Peyton Manning, Elway had a string of successes in free agency thanks to the best lure in the league.

Since Manning's retirement, however, the misses are piling up.

He said honesty is the only answer to emerging from what Sanders called "the world of suck."

"If you consider yourself a tough NFL player, well then damn, look at yourself in the mirror, pick yourself up and get ready to go back to work," Flacco said.

Flacco's rhythm with his top receivers.

Although he threw for 303 yards and three TDs, Flacco completed just 11 of 18 to Sanders and Courtland Sutton. Up 17-3 and going in for the kill just before halftime, Flacco airmailed a pass over Sanders' head that was intercepted by Ronnie Harrison, sparking a 20-0 Jacksonville run.

Sutton. Six catches for 62 yards and his first two TDs of season Sunday. OK, Jalen Ramsey was a sideline spectator, but still.

Run defense: Three of the past 200-yard rushing games in the NFL have come against Denver, all since Week 5 of last season: Jets' Isaiah Crowell (229), Rams' Todd Gurley (208) and Jaguars' Leonard Fournette (225).

The Broncos suffered the worst loss of their anguished season when OLB Bradley Chubb awoke in pain and went for an MRI that found a torn ACL, ending his season.

1 — the number of NFL players who had 13 or more sacks, 80 or more tackles and three or more forced fumbles since the start of last season (Chubb).

Rookies Malik Reed and Justin Hollins shined against backups in camp. Can they handle filling in for Chubb?