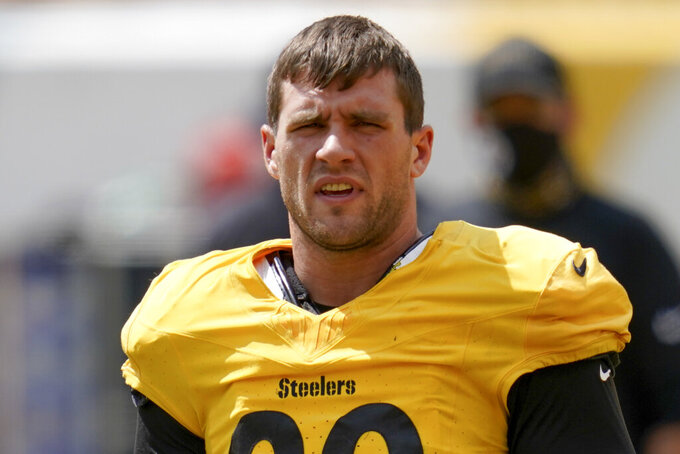 FILE - This Aug. 24, 2020 file photo shows Pittsburgh Steelers linebacker T.J. Watt (90) during an NFL football training camp practice in Pittsburgh. The three Watt brothers will share the field for the first time ever on Sunday, Sept. 27, when J.J. Watt and the Texans visit T.J., Derek and the Pittsburgh Steelers. (AP Photo/Keith Srakocic, File)

Growing up in Wisconsin, the sibling rivalry between the Watt brothers had no boundaries. Out front playing roller hockey. In the backyard playing football. Mini-baseball in the basement. Even the kitchen table at grandma's was not immune.

As kids, J.J., T.J. and Derek would spend hours at their grandmother’s house, sipping their “special drink” of Sprite and cranberry juice in sippy cups while playing gin rummy, where their great-grandmother offered proof the family's competitive streak runs deep. Really deep.

“Great grandma, even when she was 100 years old, takes no prisoners," said J.J., the star defensive end for the Houston Texans. "When that’s the attitude of your 100-, 101-year-old (great-) grandma, it kind of trickles down throughout the whole family.”

On Sunday, the Watt brothers will play a much higher stakes game when J.J.’s Texans look to avoid an 0-3 start as they visit Derek and T.J.’s undefeated Steelers (2-0). It will be just the second time since 1927 that three brothers will appear in the same NFL game.

“It’s incredible. It’s special,” said J.J., at 31 the oldest of the bunch. “It’s a testament to our parents and everything that they did and all the people in our lives – our coaches, our trainers, everybody who helped us get here. It’s going to be very, very cool.”

If not exactly warm and fuzzy. J.J. is actually looking for a bit of payback against Derek after something the fullback did last season when he played for the Chargers in a loss to the Texans.

“I won the game so it doesn’t matter, but yeah, he tossed a chip in the ribs,” J.J. said. “That’s what he does. He’s a pesky little fullback. He sticks his elbow in your ribs as you’re pass rushing and then he goes on his way. We’ll see what happens on Sunday.”

Derek, the middle brother at 27, laughed at the memory and expects to have a run-in or two with big brother's familiar No. 99.

“ I think I got him pretty good and he tried to play a spin move with it," said Derek, who signed a three-year deal with the Steelers in March. "But I am sure if he finds an opportunity this game he will definitely try to get me back for it. But I don’t see him going out of his way, that’s for sure.”

That would simply be against the Watt way. John and Connie Watt instilled in their sons at a young age the importance of selfless hard work. They shooed them out of the house in Pewaukee, Wisconsin — about a half-hour west of Milwaukee — and the three boys became the de facto sports commissioners of the neighborhood.

“We were trying to get as many people, as many kids in the community to come over our house and play as many sports as we possibly could,” said T.J., the baby of the bunch at 26.

Some things never change. The Watts spent a portion of their offseason co-hosting a game show called “Ultimate Tag,” and are currently starring in a series of Subway commercials featuring mom and dad.

Yet even as their stars have risen — as tends to happen when you're a three-time Defensive Player of the Year like J.J., or a 2019 All-Pro with a rapidly growing reputation as one of the best outside linebackers in the NFL in T.J. — their private lives remain relatively simple. Their group chats focus on Derek's son Logan, J.J. complaining about the heat in Houston; and T.J. being well, T.J., but staying as quiet as possible.

Considering how much his chatterbox older brothers talk, maybe it's fitting T.J. is practically a monk by comparison. Or maybe it's just a byproduct of constantly having to prove yourself in a house stuffed with testosterone.

Was T.J. picked on? Of course. Did it bother him? No. Without it, he realizes he might not have ever made it to the NFL.

“For me it was super important in my development to play with J.J. and Derek to get beat up on a lot when I was younger," he said. “But (it taught me to) just kind of be resilient and continue to grow and learn from my experiences playing up with those guys.”

Their bond remains as strong as ever. During the lengthy shutdown due to the COVID-19 pandemic, they retreated to Wisconsin, where J.J.'s gym served as the hub of their offseason program. Whatever regimen they put together looks like it worked.

T.J. is coming off a 2 1/2 sack performance against Denver. Derek drilled Broncos punter Sam Martin in the end zone for a safety, and opened up a hole for running back James Conner to tear off a 59-yard sprint that sealed a 26-21 victory. While the Texans are winless, J.J. twice took down reigning NFL MVP Lamar Jackson last week against Baltimore.

T.J. and Derek facetiously gave credit for their preparation to the “owner” of the gym, who crashed their video conference with reporters on Friday by identifying as “Justin James” from the “Better Brother Gazette.”

“The thing about the club owner is that he really enjoyed cutting the grass himself,” T.J. said with a smile after J.J.'s face popped up on screen. "He really enjoyed lining the football field for his members. The grass was always pristine. The gym was always clean. We tried to do our best to clean up after ourselves and we’re just very grateful that he let us use his facilities.”

For three hours on Sunday, their lifelong alliance will be put to the side. When it's over, they'll pose for pictures to commemorate the moment, one they know isn't about themselves but the environment that nurtured them. From great-grandma to grandma to mom and dad.

“I think it came down to our parents working extremely hard for what they got in life and teaching us that if we want to accomplish our dreams and our goals, we had to work extremely hard and make a lot of sacrifices,” J.J. said. "Which at the time we hated but now we understand and we appreciate it.”