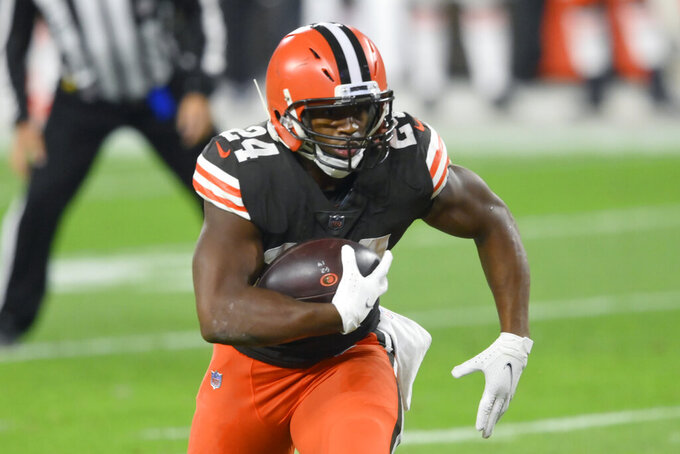 FILE - Cleveland Browns running back Nick Chubb runs with the ball in the first quarter of an NFL football game against the Cincinnati Bengals in Cleveland, in this Thursday, Sept. 17, 2020, file photo. Browns star running back Nick Chubb has been designated to return from injured reserve after missing four games with a sprained knee. Chubb got hurt in Cleveland's Oct. 4 win at Dallas. A Pro Bowler last season, Chubb rushed for 335 yards and four touchdowns in four games this season before getting hurt. (AP Photo/David Richard, File)

CLEVELAND (AP) — The Browns can hand off the ball to Nick Chubb again.

Cleveland activated the star running back from injured reserve on Saturday, clearing the way for him to play Sunday against Houston after missing four games with a sprained right knee.

Chubb practiced this week for the first time since hurting his knee while blocking early in an Oct. 4 win over Dallas. The Browns (5-3) were leading the NFL in rushing when Chubb got hurt, but Cleveland's offense hasn't been the same without the 2019 Pro Bowler.

Chubb looked quick and made all his cuts without any setbacks this week, but coach Kevin Stefanski waited to talk to the team's medical staff before deciding to put him back on the roster.

He will return to face a Houston defense that is allowing a league-worst 159.5 yards rushing per game.

Chubb, who ran for 1,494 yards last season, gives the Browns another needed playmaker as the team is adjusting its schemes without wide receiver and deep threat Odell Beckham Jr., who suffered a season-ending knee injury last month.

A second-round pick in 2018, Chubb ran for 335 yards and scored four touchdowns in three-plus games. He averaged 5.9 yards per carry.

With Chubb and Kareem Hunt, who won a rushing title with Kansas City in 2017, the Browns have one of the best backfield tandems in the league.

The team also elevated guard Michael Dunn from the practice squad. He'll give the Browns some depth after lineman Chris Hubbard was placed on the COVID-19 reserve list Friday.

Hubbard had started the past three games for Wyatt Teller, who returned this week after being sidelined with a strained calf.