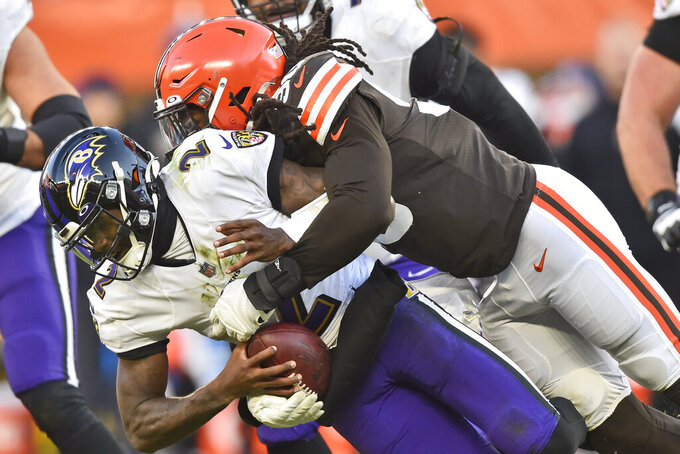 FILE - Cleveland Browns linebacker Jadeveon Clowney (90) sacks Baltimore Ravens quarterback Tyler Huntley (2) during the second half of an NFL football game, Sunday, Dec. 12, 2021, in Cleveland. After a disappointing 2021 season, the Browns head into free agency looking to plug holes — some bigger than others. On defense, the Browns would like to re-sign edge rusher Jadeveon Clowney, who had a solid first season in Cleveland. (AP Photo/David Richard, File)

NEEDS: The Browns got a jumpstart on free agency by addressing their biggest need. They traded for wide receiver Amari Cooper, sending the Dallas Cowboys a fifth-round draft pick and swapping sixth-rounders. Cooper will make $20 million next season. Cleveland also released dependable WR and leader Jarvis Landry, clearing up salary-cap space to address other holes. QB Baker Mayfield will almost certainly return as the starter after an injury-altered 2021. The Browns could add a veteran backup to push Mayfield or make another trade. Clowney had a rebirth of sorts last season, and the Browns would like to re-sign the edge rusher to complement All-Pro Myles Garrett — but at the right price. Look for GM Andrew Berry to add defensive line depth with one-year deals.