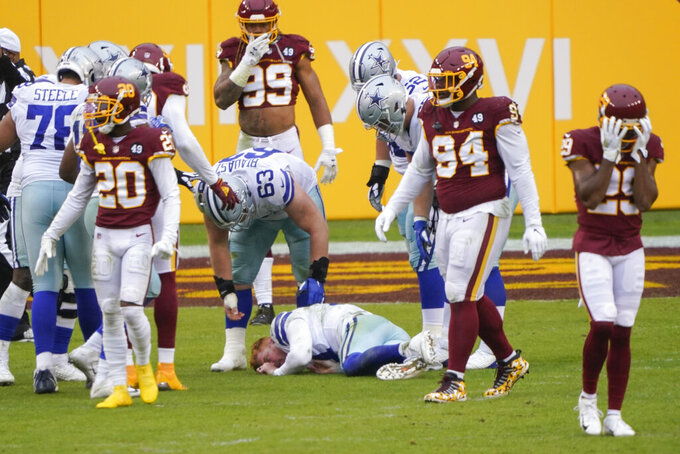 Players reacting to seeing Dallas Cowboys quarterback Andy Dalton (14) lying on the ground after getting hit by Washington Football Team inside linebacker Jon Bostic (53) in the second half of an NFL football game, Sunday, Oct. 25, 2020, in Landover, Md. (AP Photo/Susan Walsh)

Cleveland receiver Odell Beckham and Washington safety Landon Collins will have more tests Monday to determine the extent of what could be season-ending injuries.

Beckham injured his left knee while attempting to make a tackle after Baker Mayfield﻿ threw an interception on the team's opening pass play. Beckham limped to the locker room and didn’t return.

Losing Beckham would be a significant setback for the Browns (5-2). He has 23 receptions for 319 yards and three touchdowns this season.

Collins injured his left ankle/Achilles tendon in noncontact fashion early in the second quarter. He limped off to the injury tent before being ruled out minutes later and carted off the sideline with his helmet on and head down. Collins has been an integral part of a Washington defense that allowed its fewest points in three seasons.

Other key injuries Sunday in Week 7:

— Dallas quarterback Andy Dalton was knocked out of a loss at Washington after brutal hit by linebacker Jon Bostic. Dalton was evaluated for a concussion and ruled out. Bostic was ejected because the hit on a sliding Dalton. Ben DiNucci replaced Dalton for the Cowboys, who later announced that Dalton was alert, in good spirits and would fly back to Dallas with the team.

— New York Jets defensive end Kyle Phillips will miss the rest of the season after sustaining an ankle injury. Phillips was carted off the field early in the second quarter. Safety Bradley McDougald left in the second half with a shoulder injury. Receiver Breshad Perriman (concussion) left the game in the fourth quarter after a big hit from Buffalo safety Micah Hyde﻿.

— The Niners lost two offensive starters. Receiver Deebo Samuel (hamstring) left with five catches for 65 yards. Running back Jeff Wilson, filling in for injured starter Raheem Mostert, took a cart to the locker room and was ruled out with an ankle injury. He had 112 yards and three touchdowns on 17 carries.

— Los Angeles Chargers tight end Virgil Green injured his right ankle making a 26-yard touchdown catch in the third quarter. Teammate Melvin Ingram helped carry Green onto a training table. He was then carted to the locker room and later ruled out.

— Jacksonville receiver Dede Westbrook sustained a significant left leg injury that was so gruesome that CBS opted not to show a replay. The Jaguars also lost cornerback Sidney Jones (back).

— Denver running back Phillip Lindsay (concussion) was ruled out against Kansas City.

— Carolina left tackle Russell Okung (calf) left in the second half against New Orleans and did not return.

— New Orleans offensive tackle Terron Armstead (arm) left in the second quarter and did not return.

— Green Bay safety Raven Greene (oblique) left in the fourth quarter against Houston and did not return.

— Houston cornerback Bradley Roby (knee) left in the first quarter and missed the rest of the game. Texans interim coach Romeo Crennel said after the game that he didn’t think that Roby’s injury was major.