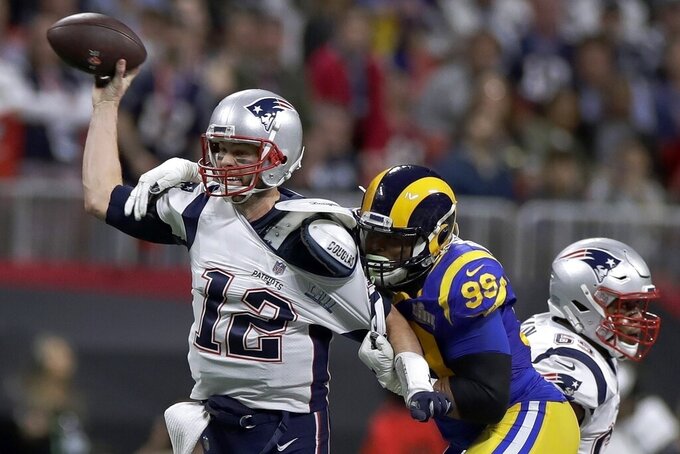 CLEVELAND (AP) — The Browns passed their first prime-time test. The second one won't be nearly as easy.

The defending NFC champions, with an offense teeming with talent and defense led by incomparable star tackle Donald, will visit Cleveland in the Browns' first nationally televised Sunday night game in 11 years.

On Monday night, the Browns (1-1) bounced back from a dreadful 30-point loss in their season opener to Tennessee by bullying the New York Jets, who were already missing quarterback Sam Darnold when his replacement, Trevor Simiean, went down with a season-ending injury.

The uber-hyped Browns, who have gone from winless two years ago to somewhat overexposed in 2019, get a chance to see how they stack up to a legitimate Super Bowl contender, one fixated on winning an NFL title this season.

"It'll be a challenge and we'll be able to really measure where we're at as a team," said Browns guard Joel Bitonio. "Now it's a true team, a true playoff team, a team that was in the Super Bowl, a team that we can see, 'Hey, how are the Cleveland Browns this year?'"

It's hard to gauge them to this point. The Browns were undisciplined in Week 1, committing 18 penalties and allowing the Titans to score 28 unanswered points in the second half. Cleveland cleaned things up considerably against the Jets, but quarterback Baker Mayfield had his second straight shaky performance and the Browns suffered a couple major injuries that may force first-year coach Freddie Kitchens to play rookies in key spots.

That could help the Rams (2-0), not that they really need any.

Quarterback Jared Goff and the Los Angeles offense have had some issues, but Donald and the rest of the defense are playing at a high level already. They shut down New Orleans last week, helped by Donald inadvertently sidelining Saints quarterback Drew Brees with a thumb injury.

"So we have to get that handled, and we're going to be tested in every position."

The two-time AP Defensive Player of the Year, Donald has no sacks and just two tackles through two games. The numbers are deceiving as teams are scheming to stay clear of Donald. The Browns will probably do the same.

"Everybody is sliding to him," defensive end Michael Brockers said. "He's going to get a lot of attention, and that's what's happening now. It's leaving a lot of opportunities for other guys to make plays. As the season goes on, they're going to have to pick their poison on which guys to block, and that's when it's going to get really fun."

It didn't get fun for Donald until Week 4 last year. He have record a sack in his first three games and still finished with 20 ½.

Mayfield has been guilty of holding onto the ball too long, and not taking advantage of receivers being open while trying to complete long passes.

He's still getting into a rhythm with Beckham, who sat out the preseason but showed why he's elite on Monday by scoring on an 89-yard play.

"It's a learning curve," said Mayfield, who while not as accurate as usual has still completed 60 percent of his throws. "Needing to know when I can take my shots and check the ball down to get completions. It's a little difficult at times but, like I keep harping on, I just need to get completions."

The Browns could exploit inexperience up front for the Rams, who are likely to have three untested starters on their offensive line.

Right guard Austin Blythe is unlikely to play due to a left ankle sprain. If he becomes the first starting offensive lineman to miss a game due to injury in McVay's tenure, sixth-round pick Jamil Demby is expected to make his first start alongside fellow 2018 draft choices Brian Allen at center and Joe Noteboom at left guard.

Allen and Noteboom will be making their third career starts. Left tackle Andrew Whitworth and right tackle Rob Havenstein haven't been spectacular so far this season, either.

Rams running back Todd Gurley has fond memories of the team's last meeting with the Browns: Gurley scored his first two NFL touchdowns against Cleveland during a 128-yard performance as a rookie in St. Louis in 2015.

Gurley is a quiet ninth in the league this season with 160 yards rushing on 30 attempts. Backup Malcolm Brown has 17 carries as the Rams attempt to lessen the load on Gurley, who leads the NFL in yards rushing since the start of the 2017 season. Gurley has insisted his knee is fine and he's ready for any workload.