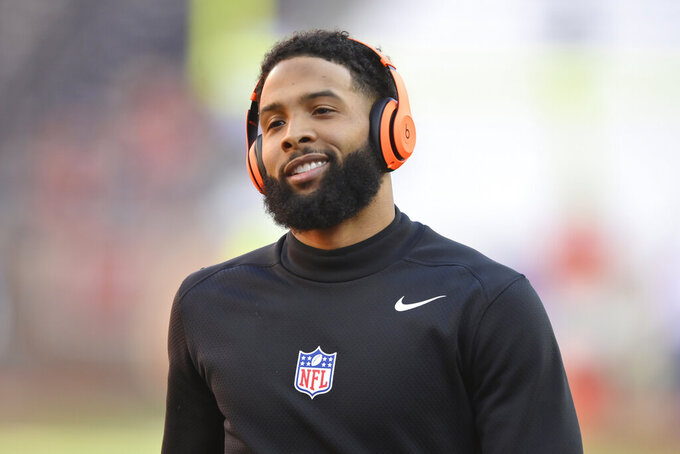 FILE - In this Dec. 22, 2019, file photo, Cleveland Browns wide receiver Odell Beckham Jr. is shown before an NFL football game against the Baltimore Ravens, in Cleveland. Browns chief strategy officer Paul DePodesta dismissed a report the team is trying to trade star wide receiver Odell Beckham Jr., whose future _ whether in New York or Cleveland or anywhere _ always seems in question. DePodesta said on a conference call Thursday, April 16, 2020, from his home in California that the team is not working on a deal involving Beckham, who was injured during his first season with the Browns after arriving in a blockbuster trade last March. On Wednesday, a report said the Browns were in talks with the Minnesota Vikings about the 27-year-old Beckham. (AP Photo/David Richard, File)

DePodesta said Thursday on a conference call from his home in California that the team is not working on a deal involving Beckham, who was injured during his first season with the Browns after arriving in a blockbuster trade last March.

On Wednesday, a report said the Browns were in talks with the Minnesota Vikings about the 27-year-old Beckham.

The Browns are busy finalizing logistics for next week's unique NFL draft, which will be virtual due to the COVID-19 pandemic. The team is hoping to continue positive momentum created by several high-profile free-agent signings this offseason.

Those additions spearheaded by new coach Kevin Stefanski and first-time general manager Andrew Berry have calmed yet another turbulent Cleveland offseason, which began with the firing of coach Freddie Kitchens and ouster of GM John Dorsey.

Things are going well for the Browns right now, and DePodesta said any thought about the team looking to trade Beckham is unfounded.

“It's frustrating a little bit," he said. ”I think it's pretty clear what we're trying to build at this point. We got an awful lot in free agency. We're excited about what we have a chance to do in the draft. We're really building around a corps of players that we think we have a chance to have a championship-caliber core and the idea we would take away from that core at this moment just doesn't make a whole lot of sense and really not something we are exploring at all."

Beckham always seems to be at the center of drama, some of it because of his actions and some simply due to his flashy persona. Last season, after reports surfaced he was unhappy in Cleveland, Beckham said he wanted to stay with the Browns and play alongside close friend Jarvis Landry.

DePodesta feels Beckham wants to see things through with the Browns, who were a disappointing 6-10 last season.

The three-time Pro Bowler posted a video on his Instagram account of him opening a box containing three new No. 13 jerseys after the team unveiled a more traditional look on Wednesday.

“I have no reason to believe that he doesn't want to be here," DePodesta said. "Odell's been very good this offseason. He's been engaged I know with Kevin. I know he's excited about the possibilities of what this offensive system could bring for him and we're excited to have him.”