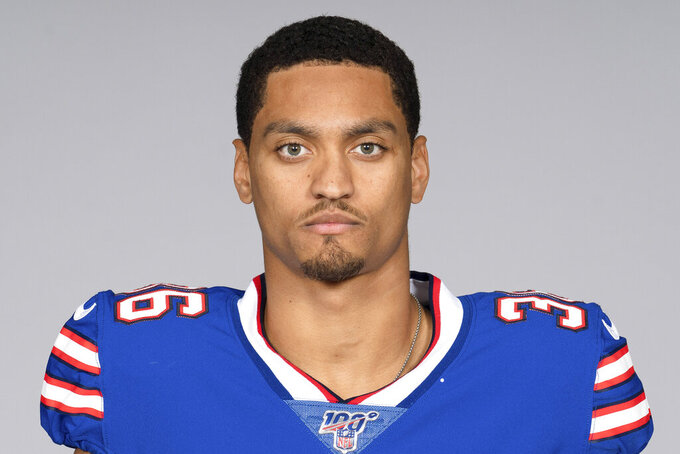 FILE - This is a 2019 photo of Kevin Johnson. The Cleveland Browns cornerback remains hospitalized after his liver was lacerated in practice when a teammate landed on him. The team said Johnson, who is in his first season with Cleveland, was admitted to University Hospitals on Wednesday, Aug. 19, 2020 after getting hurt. (AP Photo/File)

BEREA, Ohio (AP) — An ordinary play in practice turned into a scary situation for the Cleveland Browns.

It's been a harrowing first week of training camp.

Cornerback Kevin Johnson remains hospitalized after lacerating his liver when rookie tight end Harrison Bryant landed on him while the two players battled for a pass on Wednesday.

Johnson, who was signed this past offseason by Cleveland and expected to be the starting nickel back, is still at University Hospitals. The team said the 28-year-old is resting comfortably and will stay in the hospital for at least another 24 hours for observation.

It's too early to say how long Johnson could be sidelined as liver lacerations can range in severity from mild to very severe to fatal.

Browns coach Kevin Stefanski said Johnson, who had been having a strong start to camp, was diving to break up a pass in a red-zone drill intended for Bryant.

“The defensive staff would have preferred that he held back instead out of an abundance of caution and not dive for it, but they kind of both dove and Harrison landed on top of him,” Stefanski said. "Really unfortunate, unlucky. Hoping for him, that he will be back when he is ready.

"Really the most important thing right now is that he is safe, and we want him to get well very soon.”

Stefanski called it a “totally normal” play. He also credited the team's medical training staff for recognizing the potential seriousness of Johnson's injury.

While Johnson's is by far the most serious, it continues a rash of injuries in the first week of camp for Stefanski, who is trying to cram as much as he can into this condensed period after the offseason was made virtual due to the COVID-19 pandemic.

On Monday, Pro Bowl running back Nick Chubb sustained a concussion when he was thrown down by starting weak-side linebacker Mack Wilson during the first fully padded practice this summer. A day later, Wilson hyperextended his left knee and is expected to miss significant time.

Right tackle Jack Conklin, the team's biggest offseason acquisition, missed Thursday's workout. The team has not yet provided a reason for his absence.

Garrett, who recently signed a five-year, $125 million contract, returned but only participated in individual drills.

The Browns signed Johnson, a first-round draft pick by Houston in 2015, to a one-year, $3.5 million contract this offseason. He was excited about a fresh start after being slowed by numerous injuries during his NFL career.

Johnson spent last season with Buffalo after four with the Texans.

Earlier this week, Johnson said he hoped to battle for a starting job in training camp. He flashed during the first few practices with an interception, a couple of breakups and strip of Chubb.

Before his latest injury, Johnson said overcoming previous ones — he's broken his foot twice, injured his knee and had concussions — have made him mentally stronger.

“I have high expectations for myself,” he said. “It showed me that I am still hungry, and I still believe in myself and what I want to be as a player. It definitely shaped me. I feel like I have a chip on my shoulder.”

The injury is an unfortunate setback for the No. 15 overall pick five years ago.

“We were excited about bringing Kevin in because he’s a young man but he has some really good experience playing in a couple different systems,," Stefanski said. “He was having a nice few days here, but like with every position, it’s a long haul.

"I would tell you that we’re going to miss him here and really hope that he gets back healthy when he is ready. Really excited about his future as a Cleveland Brown.”

NOTES: The Browns brought in four kickers for workouts, but Stefanski stressed it had nothing to do with full-time K Austin Seibert. ... The team continues to work with Ohio Gov. Mike DeWine about allowing fans inside FirstEnergy Stadium this season. DeWine set a maximum of 15 percent of seated capacity. The Browns intend to submit a variance request to get in more fans than DeWine is permitting. ... WR Odell Beckham Jr. made the play of the day by hauling in a 50-plus-yard pass from Baker Mayfield with a leaping catch over two defenders.