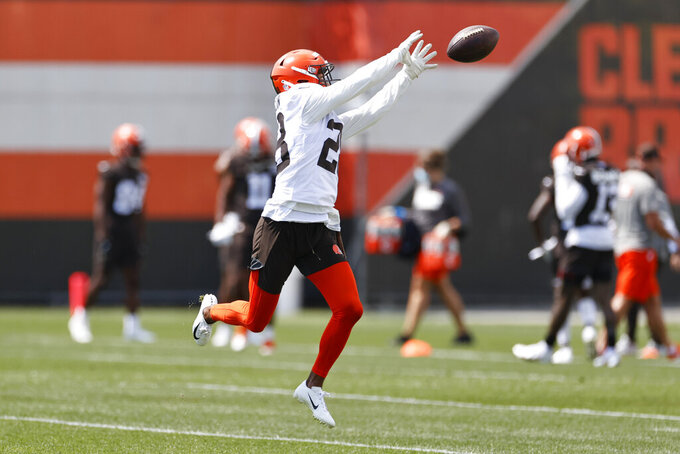 FILE - In this Aug. 14, 2020, file photo, Cleveland Browns cornerback Kevin Johnson runs through a drill during practice at the NFL football team's training facility in Berea, Ohio. Johnson remains hospitalized after his liver was lacerated in practice when rookie tight end Harrison Bryant landed on him. The team said Johnson, who is in his first season with Cleveland, was admitted to University Hospitals on Wednesday, Aug. 19, 2020. (AP Photo/Ron Schwane, File)

BEREA, Ohio (AP) — Cleveland Browns cornerback Kevin Johnson has been released from the hospital after suffering a lacerated liver in practice this week.

The team said Saturday that Johnson, who signed as a free agent during the offseason, was discharged from University Hospital on Friday and is doing well.

The 28-year-old is expected to be back at the team's facility in the next few days. He'll have to go through COVID-19 protocols before he can be re-integrated into team activities. The Browns said his status will be evaluated on a “week-by-week basis.”

The Browns got other positive news when Pro Bowl running back Nick Chubb returned to practice — on a limited basis — after sustaining a concussion earlier this week. Chubb got hurt when he got tackled by starting linebacker Mack Wilson and his helmet bounced off the turf.

The following day Wilson suffered a serious knee injury. The Browns still don't have a time frame on when he'll be back.

Johnson sustained his liver injury when he was landed on by rookie tight end Harrison Bryant when the two were battling for a pass during a red-zone drill. Browns coach Kevin Stefanski called it a “totally normal” football play.

Johnson dived for the ball, and his body absorbed the full weight of the 245-pound Bryant, a fourth-round pick form Florida Atlantic. Johnson was slow getting up but made his way back to the sideline and continued practicing.

Later, after being examined by the team's medical staff for an abdominal injury, he was taken to the hospital.

It's not known when or if Johnson will be back on the field. He had been expected to be Cleveland's starting nickel back. A first-round pick in 2015 by Houston, Johnson had been having a strong camp before getting hurt.

Johnson's NFL career has been slowed by injuries. He's twice broken a foot, suffered a knee injury and dealt with concussions. He was with Buffalo last year following four seasons with the Texans.