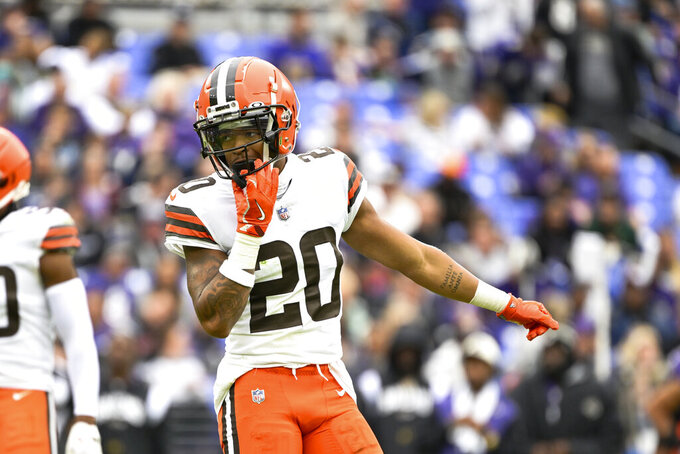 FILE - Browns cornerback Greg Newsome II (20) looks on between plays during the second half of an NFL football game against the Baltimore Ravens, Oct. 23, 2022, in Baltimore. Newsome did no try to hide his dejection or disappointment. He wanted to face Ja'Marr Chase. Newsome's chance to prove to the Bengals star wide receiver that he is a top-flight cornerback has been postponed. Chase's hip injury will keep him out of Monday night's Cincinnati-Cleveland clash and Newsome is not happy about it. (AP Photo/Terrance Williams, File)

Newsome’s chance to prove to the Bengals star wide receiver that he’s a top-flight cornerback has been postponed. Chase’s hip injury will keep him out of Monday night’s Cincinnati-Cleveland clash and Newsome isn't happy about it.

“Oh, I was pissed, for sure,” Newsome said Friday when asked his reaction to learning Chase will sit out. "Yeah, definitely was looking forward to that matchup. Hopefully he gets well soon, but yeah, I was definitely mad. I was definitely upset.”

A person familiar with the situation told The Associated Press on Thursday that Chase’s injury could keep him out several weeks, depriving Bengals quarterback Joe Burrow of his best deep threat and sidelining one of the NFL’s most explosive playmakers. The person spoke to the AP on condition of anonymity because the Bengals are not commenting on Chase’s condition.

While the Browns (2-5) did a solid job of containing him during his extraordinary rookie season (81 catches, 1,455 yards, 13 touchdowns) and won both games against the Bengals, Newsome apparently didn't do enough to impress Chase.

During a social media appearance last offseason, Chase took a swipe at Cleveland's secondary, saying “they all just talk crazy.” He did compliment Browns Pro Bowl cornerback Denzel Ward, but noted that he doesn't consider Newsome to be “elite.”

Newsome said he didn't feel insulted, but filed the comment away for motivation.

“At the end of the day, whether he thinks I’m elite, it only matters what I think about myself,” Newsome said Friday. “No, I didn’t really feel too disrespected. I was just ready to prove it again this season. You know, we’ll get him next time.”

The loss of Chase would appear to give the Browns, who have lost four straight, a significant edge. But Cincinnati still has capable receivers in Tee Higgins and Tyler Boyd as well as versatile running back Joe Mixon, a dependable check-down target for Burrow.

Also, the Browns may again be without Ward, who remains in concussion protocol and will likely miss his third straight game. Ward had a 99-yard interception return for a TD — on a pass intended for Chase — in Cleveland's 41-16 win over Cincinnati last season.

Browns defensive coordinator Joe Woods was surprised to hear about Chase's injury. However, he doesn't necessarily see the 22-year-old's absence as an advantage for Cleveland.

“They have playmakers all over the place,” he said.

If Ward is out, Newsome and rookie Martin Emerson Jr. will be mainly responsible for covering Higgins and Boyd, who may not have the same skill set as Chase but create problems all over the field.

The 6-foot-4, 220-pound Higgins has 31 catches for 455 yards and two touchdowns. Boyd, who Newsome said is Cincinnati's “best route runner out of the three,” has 29 receptions and also 455 yards with three TDs.

”He (Boyd) is the slot guy, so he gets a lot of targets inside," Newsome said. "Great third-down type of guy. He’s one of those guys, when you always game plan Higgins and Chase, he seems to go off every single time. So that’s a guy you definitely gotta stay on every single time.

“And then with Tee Higgins, he’s a deep threat because of his length. So, he catches contested balls and still runs really good routes. They gotta great combination over there of very talented guys who can do different things.”

With increased playing time, Emerson has gained confidence and has begun making impactful plays. He's still prone to mistakes if he gets caught out of position or peeking into the backfield.

Teams are throwing at him, and he expects Burrow to target him.

“That's exciting, for me it is,” Emerson said. “I’m up for the challenge. I’m a competitor. I want to compete. That’s what I came here for, to compete and do my job."