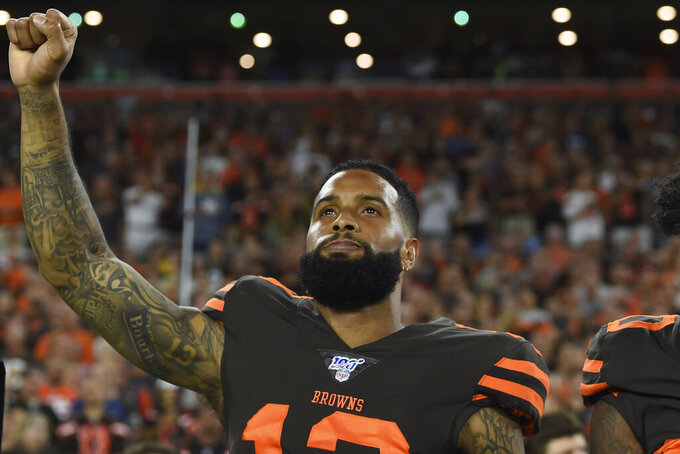 FILE - In this Sept. 22, 2019, file photo, Cleveland Browns wide receiver Odell Beckham Jr. stands for the national anthem with his fist raised before an NFL football game against the Los Angeles Rams, in Cleveland. Beckham had the best game of his career in his only matchup against Baltimore. “Yeah, they played a lot of one-high man to man,” he said. “That's why it doesn't happen much. I get man to man, I'm just too confident in me _ I'm going to win.” The Browns play the Ravens on Sunday, Sept. 29.(AP Photo/David Dermer, File)

BALTIMORE (AP) — Since their return to the NFL in 1999 as the reincarnation of the Browns, underachieving Cleveland has sought to play the spoiler role against the franchise that Art Modell took from the city to start anew in Baltimore.

Finally, when the Ravens and Browns meet on Sunday, the stakes are for first place in the AFC North.

The emergence of quarterback Baker Mayfield and the addition of standout wide receiver Odell Beckham Jr. to a team that closed strong last season brought Cleveland into the national spotlight as a legitimate contender. Though the Browns (1-2) have not yet lived up to expectations, they can earn a share of the top spot with a victory.

Sure, it's early. But a defeat will put Cleveland two games behind Baltimore (2-1) and in an all-too-familiar position: closer to last place than first.

"Baltimore has kind of been in the mix every year for so long, and they're the defending champs," Browns coach Freddie Kitchens said. "So, until somebody beats them, that's what it is."

Despite winning the AFC North last year, the Ravens were considered by some to be an afterthought behind a Cleveland team that appeared poised for greatness after a lengthy run of miserable seasons.

"It's hype. You can't really buy into it," Baltimore defensive tackle Brandon Williams said. "You really don't know what a team is until you see them on Sunday. So, once somebody gets hit in the mouth, what's the plan then?"

The plan, Mayfield says, "is finding out what is going on, eliminating the mistakes and playing to our strengths. The defense is playing great. It is our job to pick it up."

Some things to know about the latest installment in the Browns-Ravens rivalry, in which Baltimore has gone 30-10:

Beckham had the best game of his career in his only matchup against Baltimore.

Beckham won a lot on Oct. 16, 2016, when he had eight catches for 222 yards and two touchdowns in his only game against the Ravens for the New York Giants. The three-time Pro Bowler has been frustrated by double-teams so far with the Browns.

Lamar Jackson has thrown for seven touchdowns this season for Baltimore and fired 221 straight passes without an interception.

Asked about it in the middle of the week, the second-year quarterback said, "That's my job. I'm not trying to throw any interceptions. Don't jinx me, though."

Williams wasn't the only member of the Ravens who grew tired of hearing all the preseason hype about the Browns.

"That's just kind of the narrative the media created," running back Mark Ingram said. "You have to play football at the end of the day. You could have as many players as you want to on paper, but if the guys don't mesh and they don't communicate well, they don't play well together, it really doesn't mean anything.

A thinner Ravens defensive coordinator Don Martindale addressed the media this week after watching the tape of Patrick Mahomes' dominant effort (27 for 37, 374 yards, 3 TDs) for the Chiefs.

"It's over. It's over. We're on to the Browns," Martindale said. "I lost 4 pounds this week because I had to watch it three times and I threw up all three times."

Cleveland's talented offense has yet to shift into high gear.

It has not gone according to plan, but Mayfield believes the Browns are on the brink of a breakthrough.