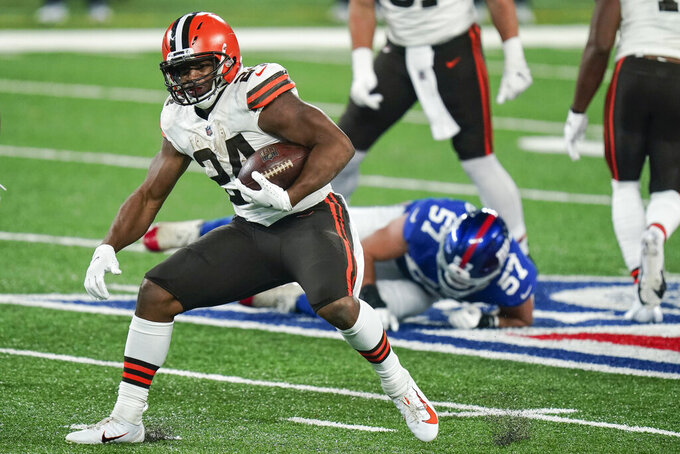 These high-scoring players are carrying our fantasy teams to victory in the championship week of the majority of fantasy seasons. These are my best bets to score in Week 16.

Only one other running back over the past four weeks has scored more fantasy points than Montgomery: the Titans' Derrick Henry. And Montgomery has 15 fewer touches. In his second-half surge, Montgomery also has six TDs over that time, so he’s not just racking up yards. He’ll have a good matchup with the Jaguars this week, a team that has allowed the third-most TDs to RBs in the league.

Chubb is third in the league in RB TDs over the past month (five), as the 1A to Kareem Hunt’s 1B in Cleveland. The 36.97% TD dependent Chubb is the anchor of the new-look Browns' offense that has becoming a scoring powerhouse over the past month, and he’s primed to have a big game against the Jets. New York defends the run pretty well, but Chubb has scored three TDs against the likes of the Ravens and Giants in the past two weeks, so he shouldn’t have any problems.

Sanders didn’t find the end zone last week in a game where the Eagles were playing from behind for most of the day, but in his first game with Jalen Hurts under center two weeks ago against New Orleans, he scored twice and ran for 115 yards. Sanders has a favorable matchup this week with the Cowboys, who have given up the second-most rushing TDs (14) in the league.

Jones has scored twice in the past three weeks. He will face the Titans, who have allowed 17 TDs to RBs this season for fifth most in the league.

It’s nearly impossible to take Henry out of this category, as he’s scored a league-high seven TDs over the past five weeks and has been difficult to stop all season. The 33.42% TD dependent Henry touches the football more than anyone, and he’ll likely be getting his usual load against the Packers, who have allowed 18 TDs to RBs this season.

The talented rookie has been the backbone of the 49ers passing attack the latter half of the season, scoring five TDs over the past seven games. There’s a possibility tight end George Kittle returns this week, but Aiyuk would still be heavily involved as Deebo Samuel is still sidelined in what could be a shootout against the high-flying Cardinals.

Hill rivals the likes of David Montgomery and Derrick Henry in fantasy points over the second half of the season, scoring 11 times in the past eight games. Hill gets a good matchup against the Falcons this week, as they’re the best matchup for WRs, allowing 28.5 fantasy points per game. The 43.33% TD dependent Hill could have a big game.

Mitchell Trubisky has been handing the ball to David Montgomery and targeting Robinson almost exclusively. Robinson has 38 targets over his past four games, and he’s scored three times in that span. He’ll go up against a reeling Jaguars unit this week.

Landry has assumed the leading role in the Browns' passing game since Odell Beckham went on IR, scoring three times in the past four games. As Baker Mayfield’s new go-to receiver, Landry is likely to score again this week against a Jets team that has given up 16 WR TDs this season, for fifth most in the league.

With an astounding 45.87% TD dependency, Evans is often in the end zone. Only three WRs have more TDs than Evans (11), and he gets to play the Lions this week, who are the sixth-best matchup for WRs.