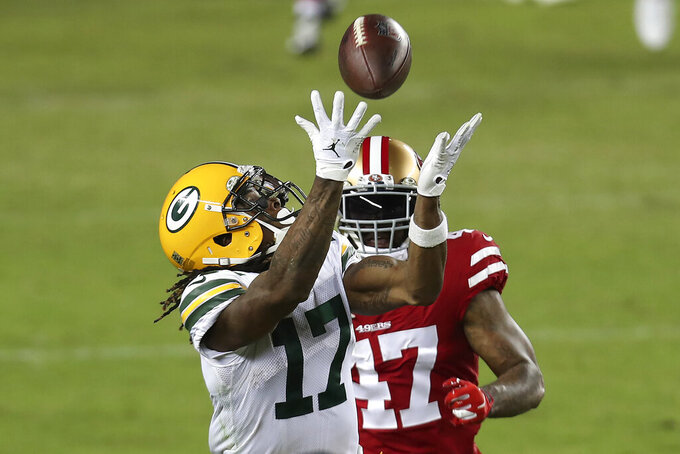 A few of these players are making the list for the first time this season, but they’re no less likely to pay off for you in fantasy this week. These are my best bets to score at the running back and wide receiver positions in Week 10.

Chubb has been out the past five weeks with a knee injury, but he’s designated to return to action this week when the Browns will go up against the Texans, who’ve allowed the second-most rushing TDs (10) this season. Chubb will have to contend with Kareem Hunt for snaps.

No team has allowed more rushing TDs than the Packers, whom Robinson will face this week. Robinson’s TD dependency (34.29%) is third in the league for RBs with more than 120 rushing attempts, and the Jaguars are leaning on him heavily with new QB Jake Luton under center. Robinson had a season-high 25 rushing attempts last week. It’s likely that Robinson sees upwards of 20 touches this week, and at least one of them could be for a TD.

Washington isn’t a prolific scoring team, but Gibson has managed to find the end zone in his past two games. This week, he’ll have the added benefit of playing against the Lions who are the No.1 matchup for opposing RBs this season. No team has allowed more TDs (15) to RBs. J.D. McKissic is still heavily involved in the passing game, but Gibson maintains the role of the two-down and goal-line back.

Edmonds had a whopping 28 touches in Week 9 with Kenyan Drake sidelined, and assuming Drake sits again this week, he’ll get close to that number again. Except this time, instead of facing a stout Miami front, Edmonds will go against a Bills team that has allowed the fourth-most rushing TDs (nine) this season.

Fournette has been outplaying teammate Ronald Jones in the Tampa backfield, and he is in line to get the bulk of carries this week against a Carolina team that is the fifth-best matchup in the NFL for running backs. In fact, Fournette broke 100 yards and scored two TDs in their first meeting in Week 2. Expect Fournette to feast again in what could be a field day for an angry Tampa team.

Adams continues to be fantasy’s best WR, and he is primed to continue his run against a middling Jaguars secondary in Week 10. Adams commands a 41.56% TD dependency, which is absurd considering that he also averages the most targets per game in the league (11.5). Only Tyreek Hill has more receiving TDs (nine) than Adams (eight).

Woods has quietly become fantasy’s 10th-best WR so far this season, as he’s scored six TDs total in eight games. This week, he’ll face a Seahawks team that is the absolute best matchup for WRs in fantasy. No team has allowed more yards (2,236), and only two teams have allowed more TDs (13). Scoring in four of his past six games, Woods is on track to reach the end zone again in Week 19.

Scoring a TD in six consecutive games, Fuller is tied for fourth in receiving TDs (six) this season. With a 37.89% TD dependency, he’ll look to make it at least seven this week, as Fuller faces a Browns secondary that is the fifth-best matchup for WRs. Only four teams have allowed more receiving TDs (12) than Cleveland.

Robinson hasn’t scored many TDs this season (three), but he’ll get his best chance yet this week against a Vikings unit that has allowed the most receiving TDs (16) this season. With David Montgomery in concussion protocol, the Bears’ offense could go through Robinson against Minnesota on Monday night.

Boyd has found the end zone in back-to-back games, as Joe Burrow’s favorite target throughout the season. This week, Boyd faces a Steelers team that defends the run well, but is tied for the third-most TDs (12) to WRs. Any Bengals scores this week are likely to come through the air, and odds are that Boyd comes down with at least one of them.