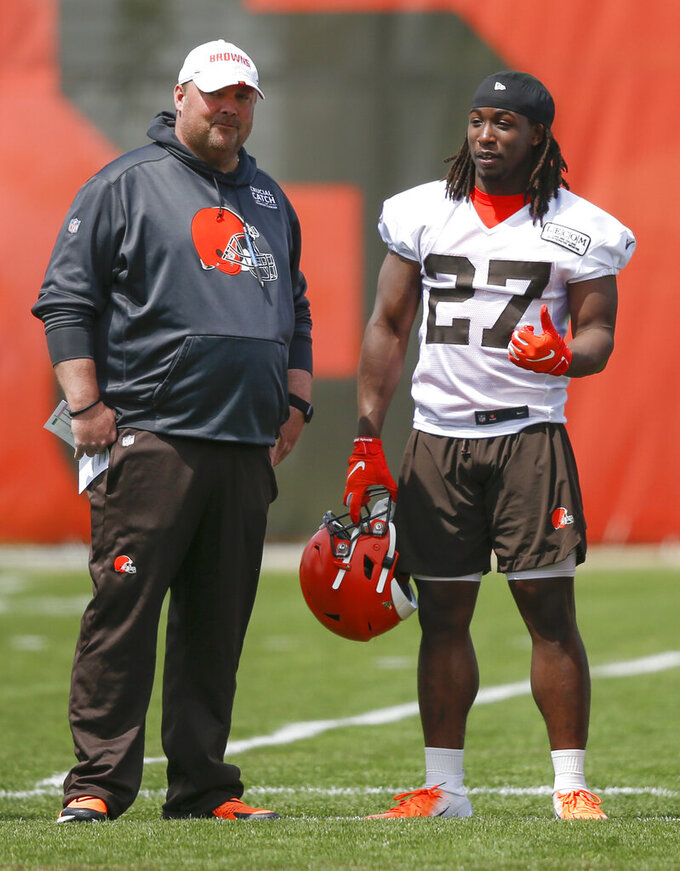 FILE - In this May 15, 2019, file photo, Cleveland Browns' Kareem Hunt (27) talks with head coach Freddie Kitchens during an NFL football organized team activity session at the team's training facility in Berea, Ohio. Kitchens has been watching Kareem Hunt work toward redemption. On Sunday, May 19, Kitchens showed the running back that he’s got his full support. Kitchens and general manager John Dorsey surprised Hunt by attending his baptism at True Vine Missionary Baptist Church on Cleveland’s east side. Hunt, who has been suspended eight games by the NFL for two physical altercations, including one in which he shoved and kicked a woman, said last week he wanted “to feel reborn.”(AP Photo/Ron Schwane, File)

On Sunday, he showed the running back that he's got his full support.

Kitchens and general manager John Dorsey surprised Hunt by attending his baptism at True Vine Missionary Baptist Church on Cleveland's east side. Hunt, who was suspended eight games by the NFL for two physical altercations, including one where he shoved and kicked a woman, said last week he wanted "to feel reborn."

Kitchens said Hunt was stunned to see him and Dorsey.

"Just wondering what the hell we were doing there," Kitchens said of Hunt's reaction on Monday while speaking at the Browns' 20th annual golf outing at Westwood Country Club. "I think he was pretty surprised. ... We care about Kareem as a person. We went there for Kareem Hunt as the person and not the football player. The thing we did yesterday was not about football at all."

Hunt was not available for comment, but he was one of several current and former Browns players to take part in the event, which raises money for education initiatives supported by the Cleveland Browns Foundation. Quarterback Baker Mayfield, who recently shaved off his thick beard for his upcoming wedding, also played.

The Browns were criticized for signing Hunt to a one-year contract as a free agent in February following his release by the Kansas City Chiefs, who said the 23-year-old lied to them about his actions during an altercation with a woman in a Cleveland hotel hallway early last year.

Since coming home, Hunt has been speaking to high school students and other troubled youth in the Cleveland area. He told reporters last week that his main message to youngsters is to make better decisions.

Kitchens is impressed with Hunt's willingness to be vulnerable and use his mistakes as a teaching tool.

"They're going to make bad decisions, but the key is to learn from those decisions," he said. "One of the most truest forms of bravery is showing your scars. You show your scars so people don't make the same mistakes that you make. And Kareem has done an exceptional job of showing his scars out in the public, and some of these schools and things he's visited without any advertisement at all. He's chosen to do that to show his scars so maybe the kids in his surroundings don't make the same mistake."

Hunt has promised he's going to make the most of the second chance. He's kept his word to this point, and Kitchens said his confidence has grown that Hunt will stay on track.

"I've gotten to know Kareem, and you know Kareem understands the things that have happened happened, and nobody's going to dispute that," Kitchens said. "But he also understands it's a new day for you, it's a new day for me every time we wake up, and you either get better or you get worse during the course of that day. He's doing a good job of just staying in the moment and continuing to strive to get better and making good choices each and every day.

"I think (being baptized) yesterday was just another step for him to do that."