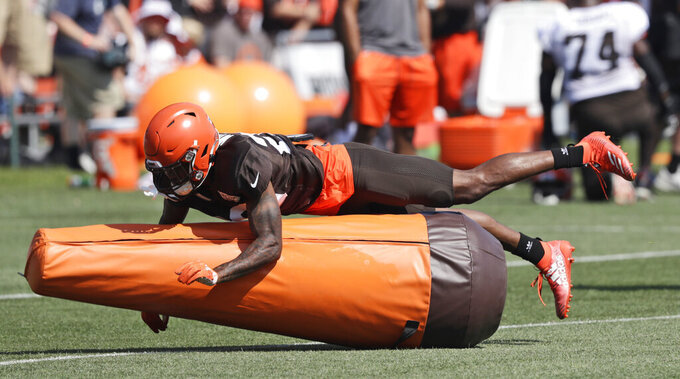 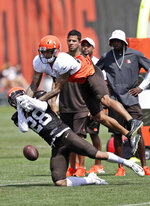 Their star power at Browns training camp has been magical for fans — and for the team's defense, which has been turned invisible by their presence.

"Our offense has a lot of weapons, we know that, and it's exciting for everyone," rookie cornerback Greedy Williams said Saturday after practice. "But at the end of the day, you've got to have defense to win.

"We don't care what anybody is saying about us or not saying. Our defense just comes out every day and tries to make things better for all of us by competing as hard as we can."

Cleveland allowed the third-most yards in the NFL last season and ranked in the bottom quarter of the league against the pass and run. Major changes followed as interim coach/defensive coordinator Gregg Williams was not retained and starters Jamie Collins, Emmanuel Ogbah and Jabrill Peppers were sent packing.

"We have the best of both worlds, but defense wins championships," said defensive end Myles Garrett, the No. 1 overall selection in 2017. "We've seen that many times throughout the years and it's never going to change. If they can't score the ball and we can, then we're going to win every time."

The defense held its own on the third day of camp, ending the three-hour, full-pad session with Murray's pick-6 of backup Drew Stanton. Williams had a pair of interceptions Friday and the new-look line appears to be jelling quickly, though it continues to fly under the radar.

First-year coach Freddie Kitchens and new defensive coordinator Steve Wilks have no problem with that side of the ball being ignored around the NFL. Nor does Garrett.

"It doesn't bother me at all because I don't mind not getting any attention," Garrett explained. "I don't mind it on the field, either. If you don't want to block me, I'll be willing to take the sack, too. I'm not a spotlight kind of guy. The offense can have all of that."

Even when the defense wins an 11-on-11 play, the offense is often the focal point. Case in point: Mayfield used very strong language to chew out his receivers for not extending their routes when he was flushed out of the pocket.

Starting linebacker Christian Kirksey felt compelled to yell to the crowd, "That means the defense is looking good."

Kitchens plans on keeping the team in pads indefinitely and will permit tackling to the ground soon. When the latter occurs, the defense will be a focal point, whether it likes it or not.

NOTES: RB Duke Johnson (right hamstring) did not practice after limping off the field Friday, and RB Kareem Hunt (groin) remains on the active/non-football injury list. Cleveland signed RB A.J. Ouellette for depth. "Duke is a quick healer, but we need to make sure this injury doesn't linger," Kitchens said. "It's kind of a day-to-day thing." . Beckham continued to impress his teammates by making a number of one-handed catches. "He's one of the greatest I've ever seen at that position," Williams said. . Former Browns QB Brian Sipe, DT Jerry Sherk and G Robert E. Jackson addressed the squad on the field. "Our guys can see the passion from our fans, but I also want them to know about the history of the Cleveland Browns," Kitchens said.