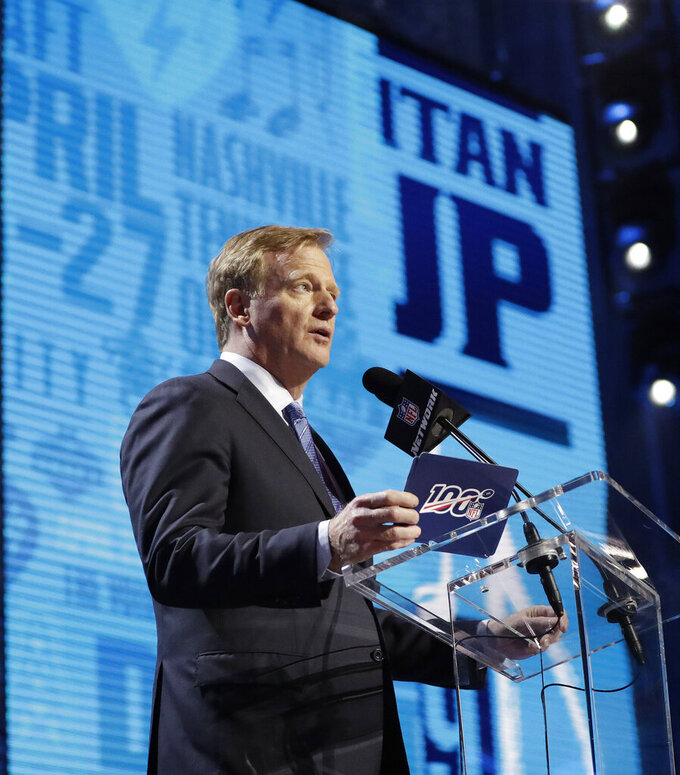 BEREA, Ohio (AP) — John Dorsey only traded text messages during the first round of this year's NFL draft.

Cleveland's wheeling-dealing general manager, who has overturned his roster with numerous transactions over the past year, was unable to pull off a deal to get into the first round Thursday night and will start the second day still holding onto his second round pick.

It's not that he didn't try.

Meeting with reporters following a long night of working the phones, Dorsey said there were three players he was willing to move up and get, but the asking price to complete the deal was beyond his comfort zone.

"I thought the compensation was too rich to move that far," Dorsey said. "I think we're in a position now, maybe you exercise a degree of patience in this and just see. We'll start working tomorrow, and we're always going to work at this thing to see if we can get up there, but the compensation package was just too much for us as an organization."

And the three players he was after?

Dorsey's decision not to package the No. 49 overall pick with any of his other seven selections for a higher spot was somewhat surprising, given his track record.

He's made 17 trades — including a recent blockbuster for wide receiver Odell Beckham Jr. — since taking over the Browns in December 2017, bucking their laughingstock status and making them one of the league's most intriguing squads.

Dorsey was willing to trade up for the right player, but only for the right price. However, he stayed on the sideline while six other teams moved up in the first round. One of them was the rival Pittsburgh Steelers, who jumped from No. 20 to 10 and took Michigan linebacker Devin Bush.

The Steelers sent the 20th pick, No. 52 and a third-rounder to Denver to climb.

Dorsey said he couldn't find the right bargain for the Browns without sacrifice.

"It takes two and every time we were trying, they'd kind of say, 'Well, you need to kick in a little bit more,' and I wasn't willing to do that." Dorsey said.

In his six previous drafts as a GM in Cleveland and Kansas City, Dorsey made 18 trades involving picks. So far, he's only been an interested spectator but that will soon change.

Dorsey indicated he'll be just as aggressive during Friday's second and third rounds.

"You explore those options and then you see if you can get up there at the right price or you stay patient or you even kick back," he said. "Now we can really get into the exercise of moving up and moving back, and we will actively be working the phones all day, all evening tomorrow."

The Browns will likely explore the market for a cornerback as only one has been taken and there several top-rated players available, including Washington's Byron Murphy, LSU's Greedy Williams, Temple's Rock Ya-Sin, Notre Dame's Julian Love and Michigan State's Justin Layne, who is from Cleveland.

This was the first time since 2008 — and eighth overall — that the Browns didn't have a first-round selection.

The outsider's role is a new one in Cleveland, where fans have grown accustomed to early picks, and so many bad ones.

After selecting Myles Garrett and Baker Mayfield with the No. 1 overall picks in each of the past two drafts, the prize — or punishment — for going 1-31 in two seasons under former coach Hue Jackson, the Browns came in as one of four teams without a first-round pick.

They willingly gave it up when Dorsey stunned the league last month by trading the No. 17 pick to the New York Giants as part of the deal for Beckham, whose arrival has sparked wild expectations in Cleveland. The Giants used that selection on Clemson defensive tackle Dexter Lawrence.

And while he's not pulled off a deal yet in this draft, Dorsey is plenty proud of his most recent one.