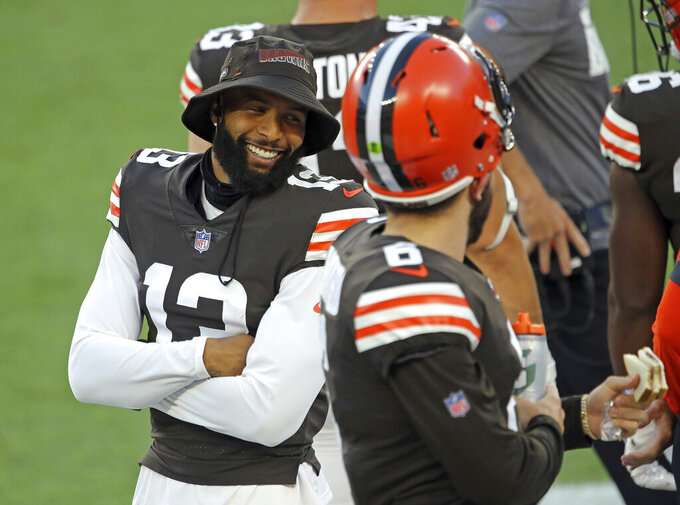 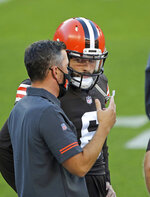 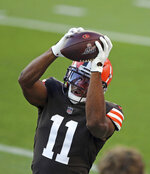 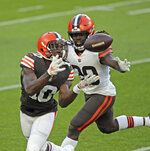 CLEVELAND (AP) — The Cleveland Browns were all dressed up with nowhere to go.

Coach Kevin Stefanski did not permit tackling to the ground during the two-hour event highlighted by Garrett and other defensive starters rehearsing the arm gestures they will use when running out of the tunnel during pregame introductions.

“We called it a dress rehearsal and we’re all dressed up,” Stefanski quipped. “It was a workout because you’ve got to be mindful heading into the regular season and we’re real excited to get started on Sept. 13 (at Baltimore).

“But we’re also in a unique situation with two games in five days, coming back home for Cincinnati on Sept. 17. We want to have a very crisp football team there in Week 1.”

Practice included sequences of the offense lining up, calling signals and running plays without any defensive players on the field. Tight end Pharaoh Brown still celebrated after catching a touchdown from Mayfield, performing an end-zone celebration with a half-dozen teammates including the third-year quarterback.

“With the season coming up, it’s just about staying healthy now,” starting defensive tackle Sheldon Richardson said. “We ain’t woofing about it, we’re just putting in hard work. I don’t see any better way Coach could have handled everything that’s been thrown at him.”

The same was true for the 6-foot-3, 294-pound Richardson, who won a punt-catching contest that formally began the full-team presentation. The eighth-year pro scored two rushing touchdowns as a rookie with the Jets and said he’s lobbied for similar opportunities in Cleveland.

“I’ve told everyone my high school stats, but they don’t believe me,” Richardson said, laughing. “I know that Coach knows from the year we spent together with the Vikings. I can still play a little tight end, goal-line running back, whatever they need.”

When the fun and games ended, several dozen players left the stadium wondering if their NFL dreams had vanished. The Browns must reduce their roster from 77 to the league-maximum 53 active players by Saturday at 4 p.m.

Stefanski admitted that most of the cuts have already been determined over “the last few weeks, maybe adjusted by a player here or there.”

“There are some tough decisions, but to say tonight was an end-all, be-all isn’t fair,” he said. “Cutdowns loom and that’s one of the toughest parts of this job. That’s why I pulled the team together at the end to tell them how much I appreciated their hard work throughout this whole process.”

C JC Tretter (right knee surgery) and LB Mack Wilson (knee) made their first public appearances since being injured, but remained safely on the sideline. Stefanski declined to speculate on their status for Week 1. …

All spectators were seated in the lower deck, socially distancing in small groups. Bottled beer, soda and water was available for purchase as the Browns continue to plan for a limited number of fans at home games, pending permission from the city and state.