Browns emerge from Garrett chaos with legit shot at playoffs 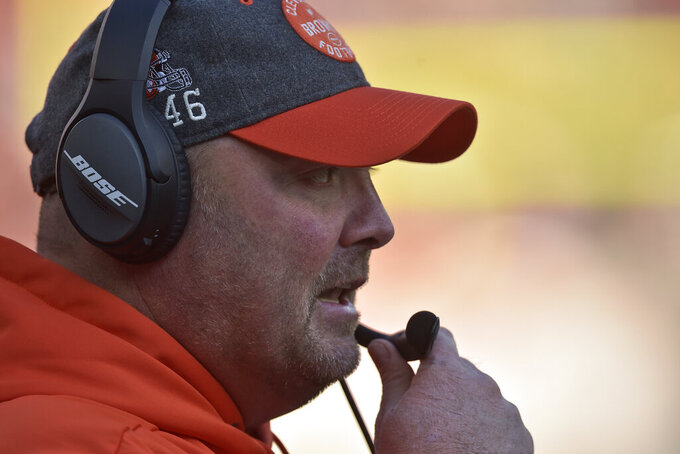 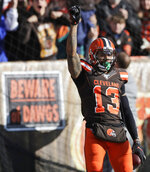 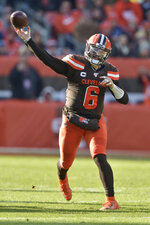 CLEVELAND (AP) — The controversy-around-every-corner Browns emerged on the other side of the helmet-swinging Myles Garrett maelstrom a more connected team.

They bonded during a week loaded with suspensions, appeals, fines, and outside noise by playing an incident-free game on Sunday. There was no drama, no ejections, no glittery watches, illegal cleats or visors, no bashing of coach Freddie Kitchens, no season-ending injuries or any major issues against Miami.

How refreshing. Just some good ol’ fashioned football at last.

Maybe this talented, over-publicized team is growing up. Maybe it’ll reach those high expectations heaped on them this summer.

Maybe the Browns, who will visit Pittsburgh on Sunday to rekindle a rivalry that’s nuclear hot at the moment, will make the playoffs after all.

“We still have a lot of work to do,” center JC Tretter said Monday. “We are far from where we need to be and where we want to be.”

Under strange circumstances created by Garrett’s attack on Steelers quarterback Mason Rudolph last week, the Browns got their third straight win, 41-24 at home against the overmatched Dolphins, a timely opponent for Cleveland to take out its frustrations. And just like that, the Browns (5-6) have positioned themselves to make a postseason run that just a few weeks ago seemed unlikely.

Following an ugly 24-19 loss at Denver on Nov. 3, a setback worsened by safety Jermaine Whitehead’s shocking postgame social media rant that led to his release the following day, the Browns were 2-6 and being ridiculed for a lack of discipline, character and heart.

With a greater attention to detail and renewed focus, they appear to have salvaged their season.

“We kind of had to go into playoff mode a couple of weeks ago,” said Kitchens. “It is just one game at a time once you get to the playoffs. That is the way it should be all year. These guys have just bought into that kind of mantra of 1-0 this week, and that is the only thing we care about.”

One of the main factors in the Browns’ improvement has been quarterback Baker Mayfield’s strong play over the past few weeks. After throwing a league-high 12 interceptions in Cleveland’s first seven games, he’s got just one in the last four with six TD passes.

Mayfield’s decision making has been better, his passes sharper, and the second-year QB is again playing with that uber-confidence that endears him to teammates and enrages opponents.

“Anytime you go through adversity, you either mature or you wilt,” he said. “I do not think our team is going to wilt.”

Sure, it helped to go against the Dolphins, who were missing several starters in the secondary, but Mayfield passed for a season-high 327 yards, 148 to wide receiver Jarvis Landry, who scorched his former team for 10 catches and two TDs.

The Landry/Odell Beckham Jr. tandem combined for 232 yards receiving, running back Nick Chubb ran for 106, and Kareem Hunt, whose return from an eight-game suspension has provided a needed jolt, scored his first TD with Cleveland.

Garrett’s indefinite suspension deprives the Browns of their best defensive player and weakens the overall pass rush. The Browns struggled to put consistent pressure on Ryan Fitzpatrick, and the savvy veteran gashed them for 45 yards rushing and a TD.

Coordinator Steve Wilks may have to rely on more blitz packages to generate heat.

Tackle Larry Ogunjobi’s return from his one-game suspension for shoving Rudolph will help.

Kitchens’ future looked bleak a few weeks back. But during the three-game win streak, the Browns have cleaned up their penalties, played with more purpose and, the Garrett incident notwithstanding, avoided self-inflicted setbacks.

“Big part,” defensive tackle Sheldon Richardson said when asked of Kitchens’ role in the turnaround. “He hits on everything — a little bit too much, beats a dead horse sometimes. But we need it. We definitely need it.”

Kicker Austin Seibert made two field goals against the Dolphins, but missed a 46-yarder, his third miss in the past two games after going 18 of 18 to start the season.

Kitchens remains hopeful defensive end Olivier Vernon can return this week after missing three games with a sprained knee. With Garrett out, the Browns need Vernon, who was playing his best ball before getting hurt against the Broncos.

It’s unusual for teams to play twice in 17 days, and the Garrett-Rudolph affair gives this edition of Browns vs. Steelers some added luster and hostility. Not that it ever needs more.