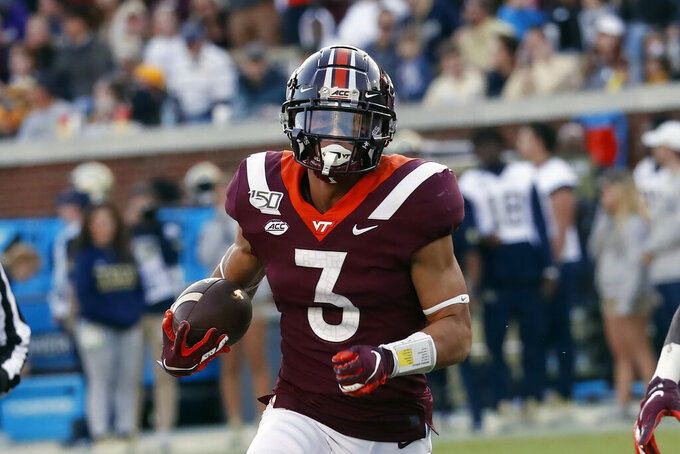 FILE - Virginia Tech defensive back Caleb Farley (3) returns an interception for a touchdown in the first half of an NCAA football game against Georgia Tech in Atlanta, in this Saturday, Nov. 16, 2019, file photo. Among the possibilities, if the Cleveland Browns stay at No. 26 in the draft, is Virginia Tech's Caleb Farley. (AP Photo/John Bazemore, File)

CLEVELAND (AP) — The Browns are hosting the NFL draft this year. Usually, they're headlining it.

After finally ending their nearly two-decades-old postseason drought last season, winning their first playoff game since 1994 — over dreaded archrival Pittsburgh — and establishing themselves as one of the NFL's rising teams, the Browns are legitimate contenders.

The Browns enter this year's draft, which will be held along the city's lakefront on a newly constructed stage nestled between FirstEnergy Stadium and the Rock & Roll Hall of Fame, with the No. 26 pick — a sign of progress and something of a status symbol.

It's their deepest pick in the first round since 1995. Since then, they've picked first four times and in the Top 10 14 times overall.

Clowney, Johnson and others will help a unit thinned significantly by injuries last season (starting cornerback Greedy Williams and safety Grant Delpit missed the entire year), but also gave up too many points and struggled at times to get off the field.

A former offensive coordinator with Minnesota, Stefanki likes the additions made by Berry.

“We’re trying to make ourselves a better football team,” said Stefanski, voted the NFL's Coach of the Year in 2020. “I think Andrew saw some opportunities to add players to this roster. We feel like we’ve gotten better on the defensive side of the ball, and we’re creating competition.”

Williams never recovered from a nerve injury in his shoulder suffered during training camp. While Stefanski said the 2019 second-round pick has made major progress in his comeback, the Browns may select one of the top corners as protection.

There are some good cornerbacks in this draft, and Berry, who prides himself on leading an aggressive front office, might trade up if there's a player he really wants.

While it would be safe to assume the Browns are focused on defense, and most mock drafts have them leaning that direction, Stefanski said the team won't be boxed in.

“You want to add good players,” he said. “I know it is easy to say, ‘It is definitely going to be here’ or ‘It is definitely going to be there.’ We are looking to add good players to this roster. We are looking to bring in competition at all levels – offense, defense and special teams – because I think that is what makes you better.”

The Browns surprised many in 2018 by picking Ohio State's Denzel Ward fourth overall. Draft experts didn't have Ward rated that highly, but it's proven to be a solid pick as Ward has developed into one of the AFC's best coverage cornerbacks.

Cleveland signed Troy Hill as a free agent last month to cover the slot. Now, the Browns need a partner for Ward.

Among the possibilities, if the Browns stay at No. 26, are Virginia Tech's Caleb Farley, Northwestern's Greg Newsome II and Georgia's Eric Stokes.

Alabama's Christian Barmore could fill it.

The 6-foot-4, 310-pounder was dominant in postseason games against Notre Dame and Ohio State, helping the Crimson Tide win another national title. Barmore is rated as the draft's best tackle among a weak group and could be gone unless the Browns move to get him.

Cleveland currently has Malik Jackson, Andrew Billings and Jordan Elliott as tackles. However, two of them are on one-year contracts and there's a need to add depth and someone long term.

When Odell Beckham Jr. was lost with a season-ending knee injury in Week 7, the Browns lacked a deep threat capable of vertically stretching a defense for quarterback Baker Mayfield.

There's a good chance Berry will look in the middle rounds to find another speedster as insurance in case Beckham isn't ready after surgery.

Mayfield established himself as the Browns' franchise quarterback last season, and the Browns are counting on him to improve in his fourth season.

Veteran Case Keenum is a solid backup, but the Browns need to think about adding another younger QB to groom for the future in case of an injury to Mayfield.

There could be several available in the middle-to-late rounds with Notre Dame's Ian Book, Washington's Kevin Thomson and Northwestern's Peyton Ramsey among a group of experienced QBs.

By Dennis Waszak Jr. 45 minutes ago
an hour ago
By Kyle Hightower an hour ago
By Schuyler Dixon 2 hrs ago
By Noah Trister 3 hrs ago