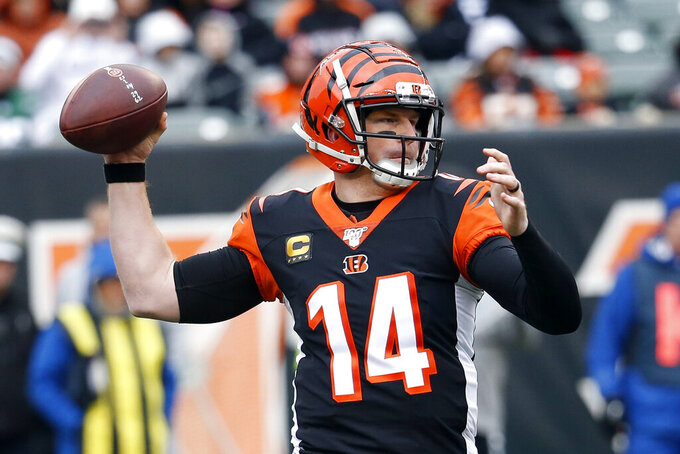 Cincinnati Bengals quarterback Andy Dalton looks to pass during the first half of an NFL football game against the New York Jets, Sunday, Dec. 1, 2019, in Cincinnati. (AP Photo/Frank Victores)

CLEVELAND (AP) — Their margin for error is completely gone, and with one more loss, the Cleveland Browns can say goodbye to their playoff hopes as well.

They may have already.

Another demoralizing setback last week in Pittsburgh has left the Browns with no option but to win their final four games — starting with the Cincinnati Bengals on Sunday — to have any chance of ending a 17-year postseason drought, the NFL's current longest dry spell.

December was supposed to be the Browns' runway to the playoffs. Instead, it might be a dead end.

“We have to buckle down and win each game from here on out," said quarterback Baker Mayfield, who suffered a bruised right throwing hand last week. “It is just plain and simple. We can’t have any slip-ups and we have to win.”

This season that offered such promise after so many dreadful ones in Cleveland has plummeted, leaving the Browns (5-7) to ponder what might have been.

“For everybody there's been a lot of disappointment," said star receiver Odell Beckham Jr., who hasn't had nearly the impact forecast when he arrived via trade in March. “There's areas that we expected more of ourselves, not like we didn't know we were going to have to go out and work for it, but we just expected it, and we were willing to go get it. We just didn't get it."

Seemingly on their way to an 0-16 season, they ended the longest losing in franchise history last week by beating the New York Jets 22-6. Cincinnati's return to the win column coincided with quarterback Andy Dalton's return to the starting lineup.

The veteran was benched three games by first-year coach Zac Taylor, but Dalton put his hurt feelings aside and showed he's still got some magic inside his orange-and-black striped helmet.

Dalton's hoping to conjure some more over the final four weeks.

“You have to have confidence in yourself," he said. “Confidence is contagious. It’s one of those things where, if you practice well, if you go into the week, guys are in the right spots, you’re talking about everything, you’re giving everyone else confidence that you’re going to get a win on Sunday.

“That’s the way I’m going to go about practicing for these last four games and these last four weeks and do whatever we can to make sure guys are feeling good for the games on Sundays.”

Mayfield's expected to play despite the hand injury, which he sustained when he smashed it on the facemask of a Steelers player last week. The second-year QB didn't throw until Thursday, and said he'd like to play without wearing a glove as he did in the second half on Sunday.

Mayfield's had an uneven second season — he led the league in interceptions through seven weeks — but it hasn't changed the Browns feeling that he'll develop into an elite player.

“He is a tremendous football player — competitor, smart, tough, has a rare competitive quality and a rare want to be great," said offensive coordinator Todd Monken. “... in my mind, we have the right guy going forward.”

Cincinnati has lacked a deep threat most of the season with A.J. Green sidelined by an ankle surgery and Ross can fill the void. He had touchdown catches of 33, 55 and 66 yards in the first two games, the start of what he'd hoped was a breakout season.

Ross got to work with Dalton on the scout team for two weeks while he was getting back into shape. Games will be a different, but welcomed experience.

"It's hard to simulate a game during practice because there's only so many things you can do," Ross said. "It's not full-speed tackling and things like that. So I think that's something I'm going to have to adjust to real quick."

For just the second time, the “Battle of Ohio” will feature two rookie coaches with Taylor matched up against Browns coach Freddie Kitchens.

The only other time it happened was in 1984, when Cleveland's Marty Schottenheimer was opposite Cincinnati's Sam Wyche, who five years later provided one of the most memorable moments in the rivalry's history when he scolded Bengals fans for throwing objects on the field by reminding them, "You don't live in Cleveland.

Cincinnati's defense is coming off its best three-game stretch of the season, allowing no more than 17 points in any game.

The biggest improvement has been on the line, which was shoved around earlier this season. End Carlos Dunlap tied his career high with three sacks of Sam Darnold in last week's breakthrough win. The Bengals are on their fourth defensive coordinator in four years, which contributed to some of the issues earlier this season.

"We’re settling into each other I think," coordinator Lou Anarumo said. "I’ve had no issues and no complaints with the guys all year. They are executing a whole lot better of late."

A loss would relegate the Bengals to last place alone in the AFC North for the second year in a row. They haven't finished last in consecutive seasons since 2001-02. They've lost 13 of 14 overall and 18 of 20, including nine straight division games since a 34-23 win over Baltimore on Sept 13, 2018.

They were swept by the Browns last season, and a loss would give them three straight against Cleveland for the first time since 2001-02.