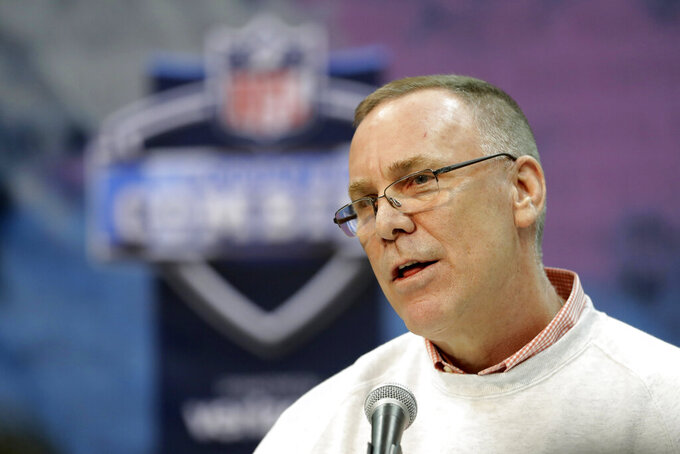 FILE - In this Feb. 28, 2019, file photo, Cleveland Browns general manager John Dorsey speaks during a press conference at the NFL football scouting combine in Indianapolis. Dorsey says he’s in no rush to trade running back Duke Johnson, who has asked to be moved. During his pre-draft news conference Wednesday, April 17, 2019, Dorsey said Johnson has not reported for the Browns’ voluntary offseason workout program, which began on April 1.(AP Photo/Darron Cummings, File)

CLEVELAND (AP) — John Dorsey's patience is about to be tested as if never before.

After having the No. 1 overall pick in each of the past two NFL drafts, the Browns — and their industrious general manager — will begin this year's as spectators.

They may not stay that way.

Dorsey, who has spent the past 16 months overhauling Cleveland's roster and reawakening "the sleeping giant" as he likes to call the Browns, doesn't currently have a first-round pick after trading it to the New York Giants in the stunning mega-deal for superstar wide receiver Odell Beckham Jr.

The No. 17 pick was part of the package in March required to land Beckham, whose arrival in Cleveland and pairing with quarterback Baker Mayfield has Browns fans convinced a Super Bowl trip is near.

Normally, it would be unnerving for a rebuilding team not to have a first-round pick. Dorsey, though, has lessened the urgency by transforming the Browns from a 0-16 team in 2017 into a 7-8-1 squad last season and potentially the AFC North's favorite this season.

That's not say this isn't an important draft as Dorsey, who previously helped rebuild Kansas City into the contender it is today, can plug holes and build depth. And if he feels there's a player he can't live without, Dorsey said he'd be willing to move back into the first round.

"If I deem it will help the Cleveland Browns, surely I will do that if it helps the organization moving forward, but the compensation on the back end cannot be outrageous," Dorsey said last week. "It has to work on both sides."

But would he be willing to give up a significant amount?

"If a certain player is there that I deem that the value fits the player, yes," he said.

Barring a trade, Cleveland's first pick won't be until No. 49 (midway through the second round) and Dorsey has seven others to continue a makeover few expected would yield such positive results this early.

Dorsey's choice of Mayfield last year took many experts by surprise, but it proved to be a savvy selection as the dynamic quarterback set an NFL rookie record with 27 touchdown passes.

The key now is adding more quality players to help Mayfield, get the Browns back in the playoffs for the first time since 2002 and maybe to their first Super Bowl.

In the meantime, patience will be required.

Here are some other things to keep in mind as Dorsey prepares for his second draft as Cleveland's GM:

With Hunt, who is suspended for the first eight games of 2019, and Nick Chubb (996 yards as a rookie in 2018) on the roster, there doesn't seem to be room for the versatile Johnson. When Hunt was signed, Dorsey was asked if that made Johnson expendable.

Johnson, who was the team's MVP two years ago, didn't appreciate the comment and failed to report for the start of the offseason workout program. His current relationship with the team is tenuous — at best. Dorsey could try to package Johnson with other picks and move up or just deal him to avoid a future headache.

The Browns attempted to sign a veteran in free agency, but were outbid and now need to find a long-term answer to play alongside Ward, who had a strong rookie season before missing three of the last four games following a pair of concussions.

Among the players who could be available: Auburn's Jamal Dean, Georgia's DeAndre Baker and Michigan State's Justin Layne.

One of Dorsey's primary offseason goals was improving the defensive line, which he did by acquiring edge rusher Olivier Vernon in the Beckham deal and signing free agent tackle Sheldon Richardson.

The Browns have some depth on the D-line, but in today's pass-and-then-pass-some-more league, teams can never have enough quality linemen.

Dorsey said "we all know" that defensive line is the strength of this year's draft.

Ohio State's Dre'Mont Jones, who grew up in Cleveland, might be a name to watch at No. 49. Another is Mississippi State's Jeffery Simmons, who recently tore a knee ligament and has had off-field issues. Dorsey, however, has shown a willingness to give players second chances and Simmons fits that mold.

Cleveland hasn't entered the draft without a first-round pick since 2008. A year earlier, the Browns traded their '08 first-round pick along with a second-rounder in '07 to Dallas in order to move up and select quarterback Brady Quinn at No. 22.