Browns executive proud to be part of diverse front office 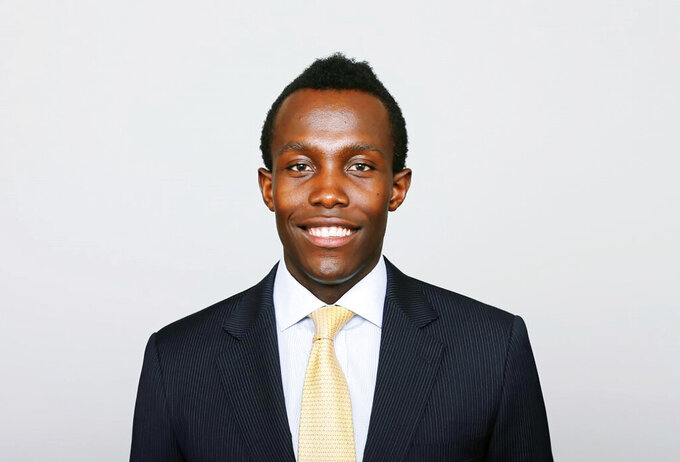 This undated photo provided by the San Francisco 49ers shows Kwesi Adofo-Mensah. Adofo-Mensah got a surprise when he was hired by the Browns. The team's new vice president received numerous congratulatory notes from strangers, proud black men like himself. He was hired in May 2020 as the new vice president of football operations for the Cleveland Browns after seven seasons with the 49ers. (San Francisco 49ers via AP)

CLEVELAND (AP) — The messages of congratulations came from complete strangers. They caught Kwesi Adofo-Mensah off guard.

Hired last month as the new vice president of football operations for the Cleveland Browns after seven seasons with the San Francisco 49ers, Adofo-Mensah was inundated with unexpected notes from people he didn't know.

“A lot of them were from awesome Cleveland fans welcoming me to Cleveland,” he said Thursday on a Zoom call. “But some of them were from black men who were just saying that it inspired them to see somebody like me in a position like this. That honestly was super meaningful to me and helped me kind of see that for what it was.

"I do not typically always appreciate that in the moment and how impactful that can be, but those messages definitely showed me that.”

Adofo-Mensah, who was a commodities trader before veering into an NFL career, is now part of one of the league's more diverse front offices. With Browns Executive Vice President Andrew Berry as one of just two current black general managers, Cleveland has two lead executives of color.

That's a small but noteworthy step for a league that has attempted for years to increase opportunities — with limited success — for minorities with programs and procedures like the Rooney Rule, which requires teams to interview ethnic-minority candidates for head coaching positions and senior operation jobs.

The NFL has only four minority head coaches and just two minority GMs — Berry and Miami's Chris Grier — in a league where more than 50% of the players are black.

There's more that can be done, but Adofo-Mensah is encouraged by any progress.

“I know the league is trying their best,” said the 38-year-old, who played basketball at Princeton and earned his master's in economics from Stanford. "It is a complex problem. It is not necessarily always the result of bad intentions. It is just sometimes these things are self-fulfilling feedbacks that continue over time, and it really is hard to break the cycle.

“Honestly, it is a cycle that happens throughout the rest of society. The NFL is no different than corporate America or Silicon Valley, where I just came from. I know that the NFL is trying, and I am going to be part of that effort to try and get my two cents of input.”

On his unconventional path to the Browns, Adofo-Mensah said he's rarely considered the impact his ascension has meant to others.

“As a minority, you kind of live in two worlds where you live in this world where you know that your expectation is lower based on the color of your skin but you also live in this world where I have agency in what is going to happen in my life,” he said. “I am one of those people that is always focused on my agency and what I can do. Wherever I have been and the things I have accomplished, I have never really stopped to kind of smell the roses in a sense."

It was a chance meeting on an elevator at the 2018 combine in Indianapolis that brought Adofo-Mensah and Berry together. They had heard about each other through league circles and are now paired in bringing needed stability to the Browns, who haven't been to the playoffs since 2002.

Adofo-Mensah's role will be assisting Berry in all aspects of operations, from talent evaluation to roster decisions to strategies.