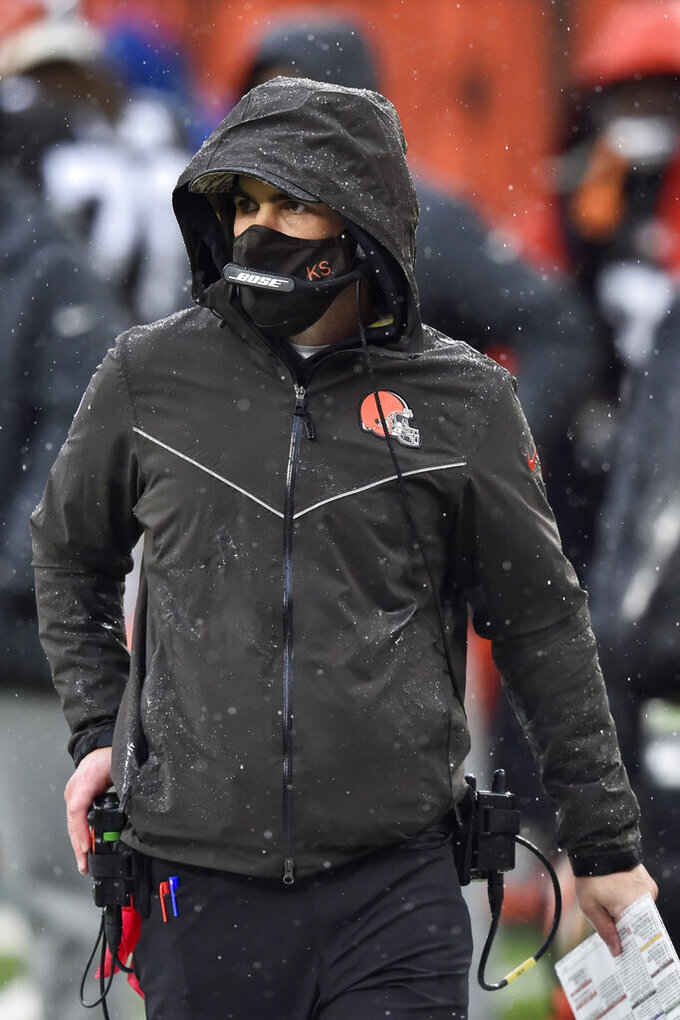 CLEVELAND (AP) — Say this for the Cleveland Browns, version 2020: They're a resilient bunch.

They've won in the wind, and the rain, and the cold. They've beaten the teams they're supposed to beat.

And, as November shrivels, the Browns (7-3) seem to be getting stronger.

“You have seen adversity roll in in a variety of ways this season, and our guys have not blinked,” coach Kevin Stefanski said Monday, one day after the Browns beat the Philadelphia Eagles despite not having dominating rusher Myles Garrett. ”They understand the task at hand, and we really can’t be distracted by the things that maybe are a little unique to 2020.”

On Sunday, Cleveland's defense showed it's more than a one-man show by rising to the challenge and excelling without Garrett, who will also miss this week's game at Jacksonville as he recovers from the coronavirus.

Olivier Vernon had three of the Browns' five sacks and a safety, linebacker Sione Takitaki ran back an interception for a touchdown and Cleveland's defensive front never let Eagles quarterback Carson Wentz get comfortable in the pocket.

The pouring rain never stopped, and neither did the Browns.

And when the Eagles pulled within two points in the fourth quarter, the two-headed running back combination of Nick Chubb (114 yards) and Kareem Hunt (leaping, 5-yard TD run) delivered huge plays.

The Browns have weathered storms both literal and figurative, and are positioned to potentially end an 18-year playoff drought. Stefanski's steadiness in his first head coaching gig has played a major role in Cleveland’s turnaround after a demoralizing 6-10 finish in 2019.

But he has shifted the culture and gotten the Browns to buy in. Instead of recoiling from the adversity, the team has embraced it, and in doing so, thrived.

"We continue to embody those ideals. That has to continue. The work is not done.”

For the second week in a row, patience was the key with a running game that started slowly before gaining speed.

The Browns had just 18 yards rushing at halftime on Sunday, but Stefanski stuck with the plan, kept giving the ball to Chubb and Hunt, and Cleveland finally wore down Philadelphia's defensive front before breaking off some long gains.

The rough weather has made it especially difficult to throw the past three games, reducing Baker Mayfield's ability to go long. That's not necessarily a bad thing because it also prevents him from taking unnecessary risks downfield.

However, the Browns are going to get into a shootout at some point and Mayfield will be counted on to deliver passes on time and on target.

Vernon stepped up, playing his best game since joining the Browns. The 30-year-old didn't live up to expectations — no one did — last year, but Vernon has been coming on lately after dealing with some nagging injuries.

The Browns considered other options in the offseason before sticking with Vernon, who agreed to take a pay cut to stay with a team he believed in.

“We wasted last year,” he said. “My mindset and everybody else in this organization’s mindset right now is to get into the playoffs. Just have to get into the tournament.”

It's hard to criticize Jarvis Landry, who has played with a broken rib and extended his streak of catching at least two passes to 105 straight games.

But his production has dropped, Landry still hasn't scored, and he played fewer snaps (38) against the Eagles than KhaArel Hodge (48) or Rashard Higgins (40).

Cornerback Denzel Ward injured his calf while having another strong game on Sunday, and the Browns are anxiously awaiting test results. Ward had an interception, several pass break-ups and hit Wentz just as he released the ball that Takitaki picked.

Safety Ronnie Harrison avoided a serious knee injury. An MRI only showed a bruise and Stefanski said he could be back for the Jaguars.

15 — Nick Chubb's 100-yard rushing games since 2018, tying him with Dallas' Ezekiel Elliott for the most in the league.

The Browns have a favorable schedule ahead, starting with this week's matchup against the Jaguars (1-9). Cleveland's two remaining home games are tough ones, against AFC North rivals Pittsburgh (10-0) and Baltimore (6-4), but the Browns other four games are against teams with an 11-29 combined record.