Browns' Garrett vows to not let 'one moment' define him 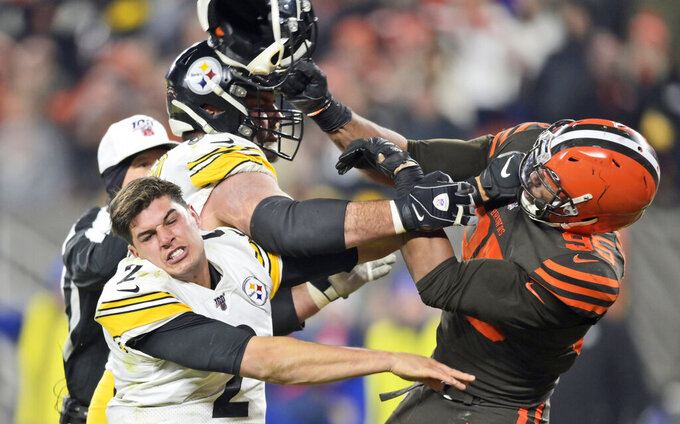 FILE - In this Nov. 14 2019, file photo, Cleveland Browns defensive end Myles Garrett (95) hits Pittsburgh Steelers quarterback Mason Rudolph (2) with a helmet during the second half of an NFL football game, in Cleveland. Garrett knows his ugly, helmet-swinging assault on Rudolph last season will always follow him. Speaking to reporters Thursday, July 16, 2020, for the first time since Nov. 14, Garrett, who was suspended six games by the NFL for his actions, touched on a wide range of topics during a 25-minute Zoom conference call. (AP Photo/David Richard, File)

Myles Garrett knows his shocking, helmet-swinging assault on Steelers quarterback Mason Rudolph last season will always follow him. It's part of his legacy, unwanted or not.

He said he won't let it define him.

“My life is bigger than one moment,” Garrett said Thursday.

Speaking to reporters for the first time since Nov. 14, when he ripped off Rudolph's helmet and struck him over the head with it during the closing seconds of a nationally televised game, Garrett touched on a wide range of topics during a 25-minute video conference call.

Garrett said he has not had any communication with Rudolph or Pittsburgh coach Mike Tomlin since the ugly incident, for which he was suspended six games by the NFL. He has said in the past that Rudolph used a racial slur toward him. He hopes they can eventually work through any differences.

“I do not have any ill intent towards either of them,” he said. "If we are able to talk, we will deal with things as grown men, and that is fine by me. I am just going to keep my eyes forward and keep focused on the plan and the goal.”

On Wednesday, the former No. 1 overall pick signed a five-year, $125 million contract extension, $100 million guaranteed, making him the league's highest-paid defensive player. Garrett's grateful the Browns never wavered in their support following the incident with Rudolph, and they believe the talented 24-year-old has only scratched the surface of his potential.

Garrett thinks so, too, and wants to reward the Browns for their loyalty.

“Now, it is time to prove it," he said. “They have faith in me, and now, I have to give them a reason to have that faith. ... Now that they have put that banner on me that I am the highest paid, I have to insert myself as the top dog.”

In the nearly eight months that have passed since that moment against the Steelers, Garrett has spent time reflecting on his career and where he wants to take it. One of the game's premiere pass rushers, Garrett isn't satisfied with just being good.

He's chasing greatness — for himself and the Browns, who haven’t made the playoffs since 2002 and are coming off a hugely disappointing season.

“Whether it starts this year or how many years it takes,” he said. "I want to lead Cleveland to that promise land.”

Garrett knows the attack on Rudolph is certain to lead to more accusations that he's a dirty player. Even before he tore off Rudolph's helmet, Garrett had been penalized and fined for other aggressive play last season. Despite the perceptions, Garrett has no plans to change his style.

“I do not think I will be walking on eggshells when I am on the field, racking my brain about not trying to be a dirty player, because I have never been that,” he said. "I am just going to do my best to play within the rules and play to the best of my ability. ... The media is going to say whatever they want about me. I am what you say I am. I am just going to play the game how I have always played it and that is not dirty.

"However it seems, I want the respect of my family and friends and some of my peers. I respect those around me, who I have grown up with, played with and who have earned my respect. Other than that, whatever is said goes by the wayside.”

The offseason has been a time for workouts and reflection for Garrett. He was personally moved by the recent nationwide protests calling for racial justice and reached out to two families who lost loved ones during the unrest and offered to pay for their funerals.

Garrett intends to do more with his platform to help people in northeast Ohio and in his home state of Texas as well as “those who I have not met and can’t reach yet.”

He also wishes the NFL would do more to affect social change. The league's acknowledgment that it should have done a better job of listening to its players was a good start, he said. Garrett wants more.