Browns get defensive, agree to terms with linebacker, safety 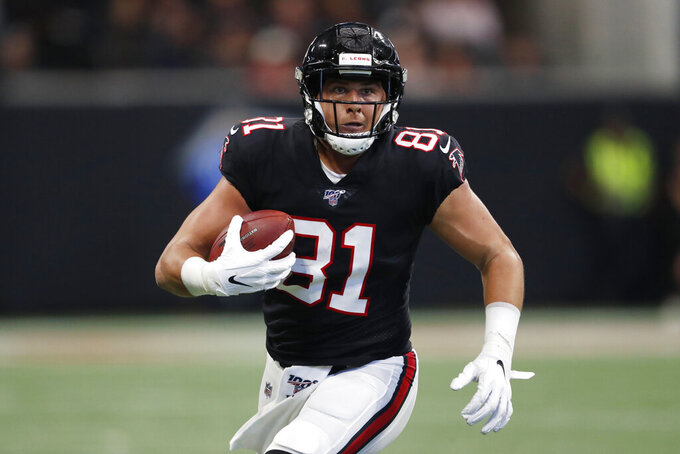 FILE - In this Sept. 29, 2019, file photo, Atlanta Falcons tight end Austin Hooper (81) runs against the Tennessee Titans during the first half of an NFL football game in Atlanta. The Browns are working toward a deal with two-time Pro Bowl free agent tight end Austin Hooper, a person familiar with the negotiations told The Associated Press. Hooper was one of the main free agency targets for Cleveland, said the person who spoke on condition of anonymity because teams can’t officially announce deals until Wednesday, Marcg 18, 2020.(AP Photo/John Bazemore, File)

Berry continued to be aggressive and addressed two major needs by striking deals with linebacker B.J. Goodson and safety Karl Joseph, a person familiar with the negotiations told The Associated Press.

Goodson, who played for Green Bay last season, will take over for departed middle linebacker Joe Schobert, and Joseph's deal is for one year. The person spoke on condition of anonymity because the players can't finalize their deals until they've taken physicals.

Berry also struck a deal Tuesday with Denver to acquire fullback Andy Janovich from the Denver Broncos for a seventh-round draft pick in 2021.

Under NFL rules, the Browns weren't officially allowed to speak to their new players until Wednesday at 4 p.m., when the league's calendar year began. The players must still undergo medical exams — made more difficult to complete because of the coronavirus pandemic — before they can be signed and paid some of the $60 million guaranteed Cleveland has promised.

The Browns were in dire need of linebackers and safeties after deciding to move on from Schobert and Christian Kirksey ans well as safeties Damarious Randall, Morgan Burnett and others.

Goodson will hopefully offset the loss of the dependable Schobert, who agreed to a five-year, $53 million deal with Jacksonville. A fourth-round pick from Clemson in 2016, Goodson spent three seasons with the New York Giants before playing with the Packers.

The 26-year-old Joseph was drafted by Oakland in 2016. He started 41 games, but the Raiders decided not to pick up his fifth-year option before last season and then he was sidelined in November by a foot injury. Joseph is a solid tackler and has recorded four career interceptions.

It's quite an impressive start for Berry, who returned to the Browns after spending one season in Philadelphia's front office. During his first tenure with Cleveland, Berry was part of an executive group that focused on tearing down the Browns' roster while hoarding future assets.

The plan is drastically different now because the Browns have talent and are committed to bouncing back after a disappointing 6-10 record last season.

With the imminent signings of the 25-year-old Conklin and Hooper, the Harvard-educated Berry was astute in bringing in two young, proven veterans whose best football may still be in front of them. Their contracts aren't outrageous and could be seen as bargains in a few years as the salary cap rises.

All three signings are intended to support quarterback Baker Mayfield, whose rocky season may have raised some doubts about whether he's the Browns' face or their future.

Following the season, owner Jimmy Haslam expressed confidence in Mayfield and felt some of the criticism toward him was unwarranted.

“Baker is like all of us, he can get better and he has some things to work on,” Haslam said.

The 6-foot-6, 306-pound Conklin has been a road-paving blocker in Tennessee and he'll only open more holes for star running back Nick Chubb and Kareem Hunt — assuming he returns as a restricted free agent — but give Mayfield more time to throw.

Part of Mayfield's regression in 2019 was due failure up front on the offensive line, most notably at both tackle spots. Conklin will replace two-year stater Chris Hubbard, and the Browns are expected to use the No. 10 overall pick in the draft on a left tackle — there should be some good ones available.

While protecting Mayfield was a priority, Berry also wanted to give him another playmaker and Hooper, who caught at least 70 passes the past two seasons in Atlanta, gives the Browns more firepower.

When third-year tight end David Njoku broke his wrist in Week 2 last season and had to have surgery, it left Mayfield without an over-the-middle target and allowed defenses to spread out and double-team star receivers Odell Beckham Jr. and Jarvis Landry.

And Keenum gives Mayfield both a mentor and sounding board but someone Stefanski can turn to if his young QB struggles again. Keenum went 11-3 with Stefanski as his quarterbacks coach with the Vikings in 2017, and his arrival could push Mayfield to worker harder this offseason.

It may be working already as video surfaced Wednesday of Mayfield throwing to Lions receiver Danny Amendola on his high school field in Lake Travis, Texas.