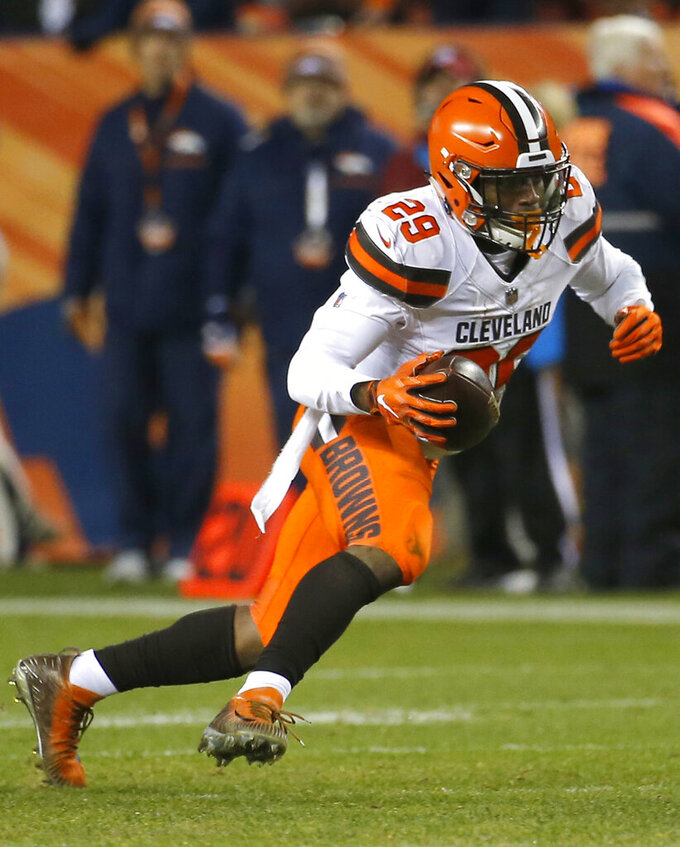 FILE - In this Dec. 15, 2018, file photo, Cleveland Browns running back Duke Johnson (29) runs during the first half of an NFL football game against the Denver Broncos, in Denver. Browns general manager John Dorsey says he’s in no rush to trade running back Duke Johnson, who has asked to be moved. During his pre-draft news conference Wednesday, April 17, 2019, Dorsey said Johnson has not reported for the Browns’ voluntary offseason workout program, which began on April 1.(AP Photo/Rick Scuteri, File)

"He is a member of this organization moving forward," Dorsey said.

Dorsey said during his pre-draft news conference Thursday that he's in no rush to trade the versatile Johnson, whose frustration at having a reduced role last season intensified in February when the Browns signed suspended running back Kareem Hunt.

Johnson's agent, Kristin Campbell, asked the Browns to deal the 25-year-old, but Dorsey hasn't moved on the request and indicated he's not planning to deal one of Cleveland's best offensive players.

Dorsey said he's had "good" discussions with Johnson's representatives and that the former third-round pick knows how he fits in.

"He understands the role that he is going to play within this offense," Dorsey said. "That is what is important because Duke, as everybody knows, is a very talented playmaker, and I look forward to seeing him on the field on Sundays."

It remains to be seen whether that's with the Browns — or another team. Dorsey has received trade inquiries about Johnson and they will likely increase leading up to next week's draft.

Cleveland doesn't currently have a first-round pick after trading it to the Giants in the deal for star receiver Odell Beckham Jr., but Johnson could sweeten a package if the Browns covet a player and want to move up from No. 49.

Johnson has not attended the team's voluntary offseason workout program, a sign of his discontent with the team. Dorsey, though, said he has not spoken with Johnson or his people about the absence.

"I always expect him here," Dorsey said. "It is voluntary so you can't (require it). That is a part of the CBA."

Johnson's workload dipped considerably in 2018, when he had 40 rushes and 47 receptions — both career lows — as the Browns went 7-8-1 after going winless the previous season. Johnson was used mostly on third downs as rookie Nick Chubb became the club's primary ball carrier and ran for 996 yards.

Johnson was unhappy with the lack of touches, and he became more upset when the Browns signed Hunt, the former Chiefs star who is expected to take his role after serving an eight-game NFL suspension to start next season.

Dorsey was asked if Johnson had to be convinced about his role.

"There are 53 guys on this football team. It is about winning," Dorsey said. "That is the sole objective of this thing moving forward is winning football. Is he a talented football player? Yeah, he is really good, and he is going to help this offense move forward."

As for Hunt, Dorsey praised his commitment since joining the Browns. Hunt was banned eight games by the league for two physical altercations, one involving him shoving and kicking a woman during an argument in a Cleveland hotel last year.

Hunt has not been available to the media since signing a one-year contract with Cleveland.