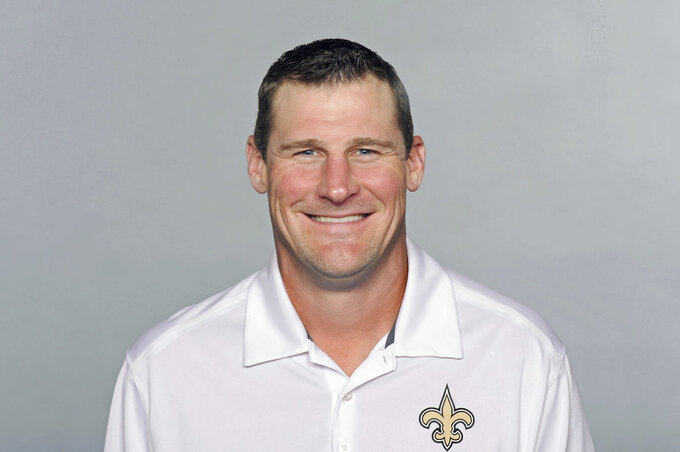 FILE - This is a 2016 file photo showing Dan Campbell of the New Orleans Saints NFL football team. The Browns took their coaching search on the road and interviewed tight ends coach Campbell. The 42-year-old Campbell met Friday, Jan. 4, 2019, with Browns general manager John Dorsey and other members of Cleveland’s committee while the Saints practiced during their bye week in the NFL playoffs. (AP Photo/File)

CLEVELAND (AP) — Dan Campbell's strong stint as an interim coach has the Browns considering him as a permanent one.

Cleveland took its coaching search on the road to interview Campbell, the New Orleans tight ends/assistant head coach, who went 5-7 after taking over Miami's job in 2015.

The 42-year-old Campbell met Friday with Browns general manager John Dorsey and other front-office members in Louisiana while the Saints practiced during their bye week in the NFL playoffs.

Campbell checks every box in what the Browns are looking for in a coach. He played in the NFL for 10 seasons — three in Dallas under Hall of Fame coach Bill Parcells — and has worked on Sean Payton's staff for three seasons in New Orleans.

But it was Campbell's 12-game run as the Dolphins' interim coach in 2015 that gained him respect and has teams other than the Browns interested in him.

Campbell took over after Joe Philbin was fired after a 1-3 start and kept the Dolphins competitive.

He's the fourth candidate to meet with Dorsey, who is expected to conduct interviews through the weekend.

The Browns have previously met with interim coach Gregg Williams, former Indianapolis and Detroit coach Jim Caldwell and Minnesota interim offensive coordinator Kevin Stefanski. Like Campbell, Williams was thrust into a difficult situation when Hue Jackson was fired and led Cleveland to five wins in eight games this season.

One of eight teams with coaching vacancies, the Browns have reportedly asked for permission to speak with Patriots linebackers coach Brian Flores and Colts defensive coordinator Matt Eberflus, as well as offensive coordinator Nick Sirianni.

The Browns have also expressed interest in former Packers coach Mike McCarthy, but to this point an interview has not been scheduled.

Per NFL rules, the Browns can't hire a coach while his team is still alive in the postseason.

When he wasn't re-hired by the Dolphins, Campbell jumped at a chance to work with Payton, who was his position coach for much of his career. He recently said the chance to join Payton's staff has helped him grow as a coach, and positioned him to take over his own team.

"I knew I was going to learn from a coach with a proven track record. I knew that was the best way for me to learn — under a guy who has had success."

Campbell played for the Giants, Cowboys and Lions from 1999-2008. He was used primarily as a blocker and finished with 91 catches for 934 yards and 11 touchdowns.