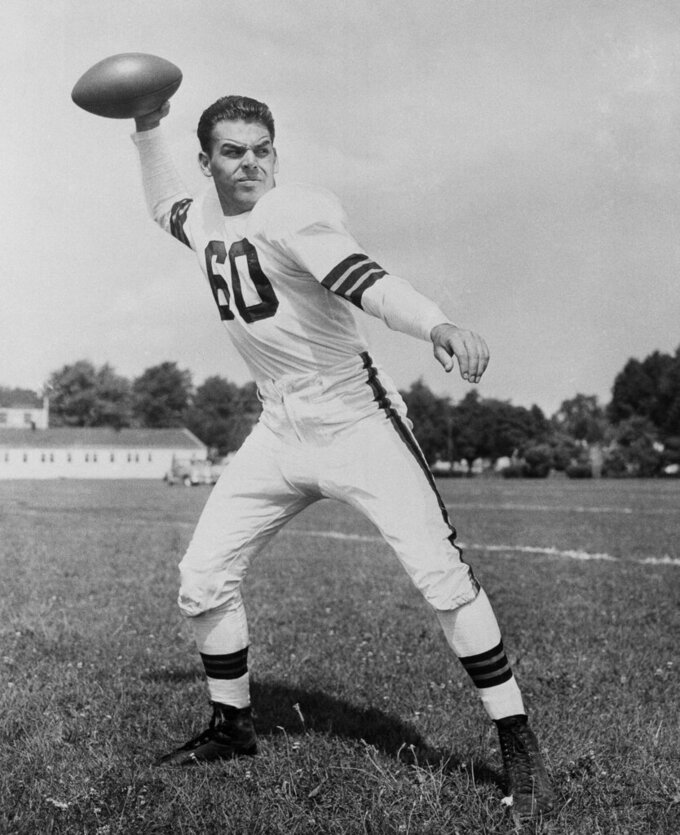 FILE - In this Aug. 17, 1949 file photo, Cleveland Browns quarterback Otto Graham prepares to throw the ball during an NFL football practice in Cleveland. The Cleveland Browns are honoring Hall of Fame quarterback Otto Graham with a statue outside FirstEnergy Stadium. One of football’s most accomplished QBs, Graham played 10 seasons with Cleveland and led the Browns to a title game in each one. With Graham under center, the Browns won four All-America Football Conference championships and three NFL championships. (AP Photo/File)

CLEVELAND (AP) — The Cleveland Browns are honoring Hall of Fame quarterback Otto Graham with a statue outside FirstEnergy Stadium.

In his final game, Graham threw for two touchdowns and ran for two in a 38-14 win over the Los Angeles Rams for the NFL title. For his career, he passed for 23,584 yards with 174 passing touchdowns and 44 rushing.

The Browns will unveil the statue, which will sit on the stadium's southwest side, in September. It will be the second by the team, following one of Hall of Fame running back Jim Brown in 2016.

The team has again commissioned sculptor David L. Deming, who also created the one for Brown.

Graham's grandson, Ryan Vanname, got a sneak peak of the sculpture earlier this spring.

"It's amazing," Vanname said. "I know my family will definitely be proud of the work (Deming) did on this because right when I walked in it's like, 'That's him. That's my grandfather.'"