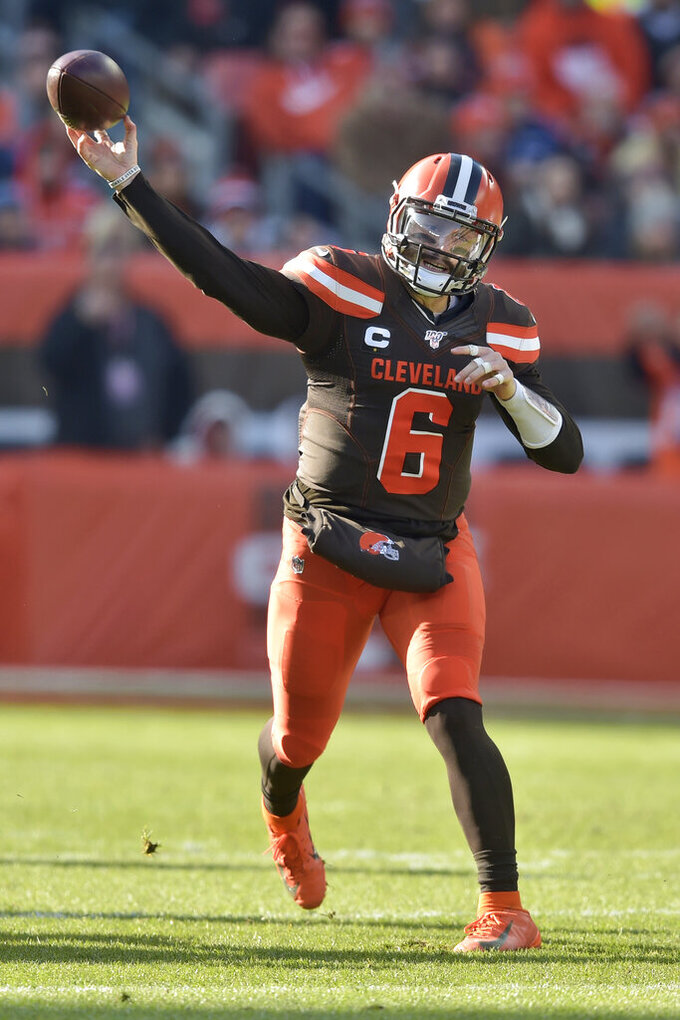 Cleveland Browns quarterback Baker Mayfield throws during the first half of an NFL football game against the Miami Dolphins, Sunday, Nov. 24, 2019, in Cleveland. (AP Photo/David Richard)

BEREA, Ohio (AP) — Once among the NFL’s most heated rivalries, Browns vs. Steelers has grown considerably warmer, stoked by a now infamous benches-clearing brawl earlier this month.

The hatred might be back. The balance is still missing.

“It hasn't been close lately,” Browns left guard Joel Bitonio said Wednesday. “They've kicked our butts since the Browns have been back. But we're trying to change that coming up these next couple years.”

On Sunday, 17 days after their memorable scuffle, a surreal sequence that threatened to leave a mark on both franchises, the Browns and Steelers will go at it again.

Nothing like a few cheap shots and personal fouls to boost everyone’s holiday spirit.

Cleveland and Pittsburgh’s bitter rivalry, which dates to 1950, will resume Sunday at Heinz Field, where the Steelers have won 15 straight games in the series. The matchup has never lacked in hostility with games featuring plenty of extracurricular activities before and after the whistle.

No fan in Cleveland will forget Browns defensive end Joe “Turkey” Jones bear-hugging Steelers quarterback Terry Bradshaw and slamming him on his head in 1976, or when Browns running back William Green and Steelers linebacker Joey Porter exchanged punches during pregame warmups a few years back.

But while the teams’ disgust and disdain for each other hasn’t wavered, there has been a missing element of competitiveness since 1999, with Pittsburgh holding a 34-7-1 advantage since the Browns returned as an expansion team.

It’s been heavily tilted to one side — Pittsburgh’s.

“To me, it takes two to have a rivalry, so we’ve got to do our part,” Browns coach Freddie Kitchens said. “That’s probably not going to sit well with some people. But, to me, you’ve got to win your share to make it a rivalry.”

The Browns (5-6) won the Nov. 14 meeting, which ended in controversy after Browns star defensive end Myles Garrett pulled off Steelers quarterback Mason Rudolph’s helmet and bashed him over the head with it, the ugliest act in a revolting end-game scene that led to league suspensions and fines and lost game checks totaling more than $2 million.

Garrett was suspended indefinitely, Steelers center Maurkice Pouncey got suspended for two games for kicking and punching Garrett and 31 other players received fines, including a $50,000 penalty for Rudolph, whose benching this week has taken a little vitriol out of the matchup.

Still, it promises to be a hard-hitting, surly affair. Always is.

As a kid growing up in the Cleveland area, Browns running back Kareem Hunt’s only memories of the game are all shaded in black and gold.

“Watching the Steelers win, against us,” he said. “I remember that. Now let’s change it. We’re here to do a different thing. It’s a different Browns team, different year.”

Kitchens is off to a better start in the rivalry than most of his predecessors. He’s 1-0 against the Steelers, but he’s not claiming to have any advantage.

There’s more than bragging rights up for grabs this week with both teams fighting to stay in the thick of the AFC playoff chase. After a slow start, the Browns have won three straight to close the gap on the Steelers (6-5), whose only loss in the past six weeks came at Cleveland.

The numbers may show a significant imbalance in their head-to-head matchups, but Steelers coach Mike Tomlin believes any talk of the demise of the Cleveland-Pittsburgh rivalry is premature.

“I don’t know that it was dead,” Tomlin said on a teleconference.

If the Browns can win this week, they would complete their first two-game season sweep from the Steelers since 1988.

Maybe then the rivalry would be fully reborn.

Wide receiver Odell Beckham Jr. may be new to the Cleveland-Pittsburgh quarrel, but he said it stacks up to his days with the New York Giants, whose trips to Philadelphia included “little 9-year-olds flicking you off and saying whatever.”

Beckham has quickly learned that the Browns have some catching up to do.

“I always knew there was a rivalry and Pittsburgh I’m sure always felt they were the big brother of the relationship,” he said. I think it’s saying ‘Enough is enough.’ We’re over here to be a part of something that’s different than what’s in the past and to be the more physical team and to be the one that comes out on top.”

NOTES: Browns starting LT Greg Robinson entered concussion protocol and will likely be replaced Sunday by Justin McCray. Robinson had concussion symptoms when he reported to the team’s facility and was sent for tests. He’s missed just one start when he was benched for McCray against New England on Oct. 27. ... DE Olivier Vernon (knee) has made progress and could be back after missing three games with a sprained knee.