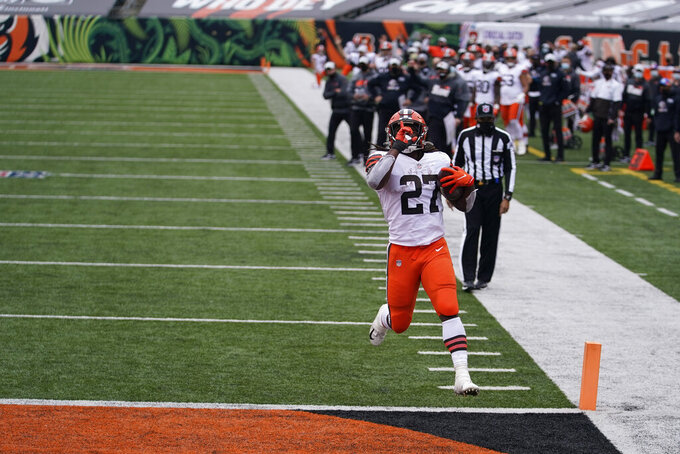 Cleveland Browns' Kareem Hunt (27) goes in for a touchdown during the second half of an NFL football game against the Cincinnati Bengals, Sunday, Oct. 25, 2020, in Cincinnati. (AP Photo/Bryan Woolston)

It’s been a rough season with injuries in 2020, but injuries also can create an opportunity for other players to shine in fantasy. Here are the best bets to score in Week 8.

No running back was on the field more than Hunt in Week 7 (90% snap count), and that’s unlikely to change in Week 8 with Odell Beckham out for the season and a Raiders opponent that is the best matchup for RBs in the NFL. Las Vegas has allowed 1.33 TDs per game to RBs, the highest mark in the league, so expect Hunt to add to his tied for league-leading seven TDs.

Yes, Kareem Hunt has seven TDs, but so does Todd Gurley, who has had a renaissance since moving to the Falcons from the Rams. This week, he faces the Panthers defense that has given up 10 rushing TDs in 2020, the fourth most in the NFL. The 42.77% TD dependent Gurley, has scored in five of seven games this season, and the odds are that he makes it six of eight this week.

The impressive rookie is fresh off a Week 7 bye to go up against the Lions team that has allowed nine TDs to RBs this season, fifth most in the league. Taylor is producing at a much higher rate (4.5 yards per catch) than both Nyheim Hines and Jordan Wilkins (2.7), and the coaching staff has noticed. Expect Taylor to get more chances, and the majority of goal-line work coming out of the bye.

Clyde Edwards-Helaire is still the lead back in KC, nine touches to Bell’s six last week, but that was only Bell’s first game with the Chiefs so I expect him to get increased opportunities. The main reason Bell is here is because the Chiefs are facing his former team in the Jets this week. Even if he doesn’t get the bulk of the carries this week, Bell is sure to get opportunities to punish the Jets on the scoreboard.

Cook has had two weeks to heal from his groin injury, coming off a Week 7 bye, so he should be good to go against a Green Bay team that has allowed 10 TDs to RBs this season, tied for the highest mark in the league. The 41.46% TD dependent Cook, has scored at least once in every game he’s played this season, and he could continue his streak in Week 8.

Adams is fantasy’s best WR on a per game basis (17.2 FPG), despite having only four TDs so far this season. Adams has only played in four of seven weeks in 2020, so know that the TDs will pile up, most likely starting this week. The Packers face the Vikings, our second-best matchup for WRs this week, and no team has allowed more TDs (12) to WRs this season.

Moore doesn’t usually see as many targets as Robby Anderson on a weekly basis, but Moore has scored three TDs in his past three games, while Anderson hasn’t scored since Week 1. He was also on the field more in Week 7 (91% of snaps to 87% for Anderson). Moore will face a Falcons team this week that is our fourth-best matchup for WRs going into Week 8. He could be aided by the return of Christian McCaffrey, who would conceivably increase the Panthers’ chances of getting into scoring position.

Fulgham has surprisingly been the one mainstay for the Eagles over the past month, scoring in three of his past four games. Alshon Jeffrey is scheduled to return to the field, but DeSean Jackson is out again, and rookie Jalen Reagor may be held out until after the Eagles’ Week 9 bye. The 33.52% TD dependent Fulgham and company will face the Cowboys' secondary this week, a unit that has allowed 12 TDs to WRs this season — tied for the most in the NFL.

The return of Corey Davis in Week 7 actually seemed to benefit A.J. Brown, who picked up a season-high 153 receiving yards in addition to scoring for the third straight week. He’ll face a Bengals team this week that has allowed eight passing TDs in their past two games. The 41.96% TD dependent Brown is likely to reach the end zone for the fourth straight week.

Evans has struggled in the past two games. Fortunately for him, and unfortunately for Chris Godwin and his fantasy owners, Godwin is out again with a broken finger. Evans' stock also rises this week because new addition Antonio Brown won’t get on the field for the Buccaneers until Week 9. Evans had scored in five straight games until Godwin returned two weeks ago, and he’s a good bet to reach the end zone once again against a Giants team that is a top-10 matchup for WRs this season.