Browns hurt themselves, fall flat after fast start in loss 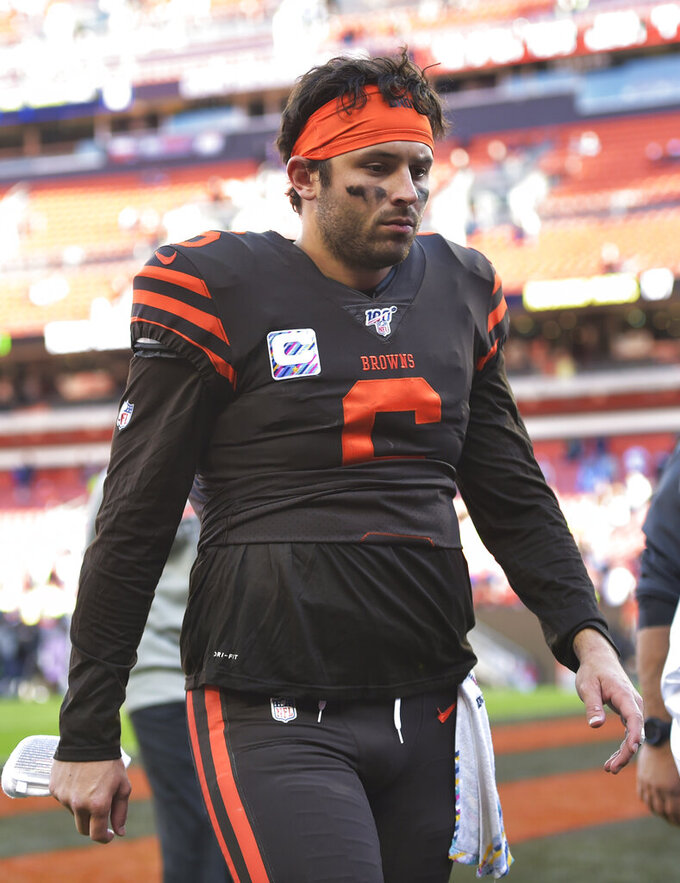 CLEVELAND (AP) — The Browns' start was exhilarating. The rest was mostly excruciating.

Baker Mayfield and Co. aren't living up to expectations — theirs or anyone else's.

Mayfield threw three more interceptions, Nick Chubb had a costly fumble and Cleveland had a punt blocked Sunday during a 32-28 loss to the Seattle Seahawks, dropping the Browns to 0-3 at home and into their bye week searching for answers.

The Browns (2-4) couldn't sustain momentum after scoring touchdowns on their first three drives, and Mayfield, who now leads the NFL with 11 interceptions, was slowed by a hip injury in the second half.

After six games, the Browns are bruised.

They led 20-6 just six seconds into the second quarter when Mayfield connected with tight end Ricky Seals-Jones for a 31-yard touchdown pass.

But it was downhill from there as Mayfield couldn't match Russell Wilson, who rallied the Seahawks (5-1) to another tight win.

"We had turnovers every which way," wide receiver Odell Beckham Jr. said. "Had the game in our hands and let it get away."

Mayfield and Cleveland's offense showed some signs of improvement. Coach Freddie Kitchens' game plan was to get Beckham more involved, and he finished with six catches for 101 yards while being targeted 11 times.

But the Browns were done in by mistakes, self-inflicted ones, with the last an interception by Mayfield with 2:46 on a pass that hit running back Dontrell Hilliard's hands but was thrown behind him.

"Tough catch for him," said Mayfield, who went 22 of 37 for 249 yards and scored on a 10-yard run. "Just seems a lot of those bounces right there are not going in our favor."

It's true the Browns hurt themselves, but they didn't get any favors from the officiating crew.

One call that really miffed Mayfield came in the third quarter when wide receiver Jarvis Landry was called for an illegal blindside block on Seahawks safety Marquise Blair. Cleveland trailed 25-20 at the time.

"The refs are never an excuse," Mayfield said. "I will probably get fined for saying this, but it was pretty bad today. The guy is squared up with him, running at him and he is lowering his head into Jarvis. What is (Landry) supposed to do? Avoid him? This is not bullfighting. I don't know. It ticks me off."

Landry bolted after the game without speaking to reporters.

Kitchens had plenty of reasons to be peeved, but he was careful not to publicly poke the officials.

Cleveland was called for nine penalties, Seattle for 10.

The Browns have been undisciplined since Week 1, when they were penalized 18 times in a loss to Tennessee. They've cleaned things up a bit, but Kitchens said his team must do a better job of not imploding.

"I don't know what them penalty calls was," he said. "They let other teams play football, but us . it's that simple. It's just annoying playing handcuffed."

Richardson was asked if the calls were affecting the Browns, altering the way they play.

"Watch the film," he said. "Every time we get momentum it's always something. A phantom here, a holding there, whatever the case may be, roughing the passer when the quarterback's still got the ball in his hands. It's football. When you leave it up to judgment calls, that's what happens. You take the game out of the players' hands and you put it in the referees' — it's just that simple.

"It's football. It's violent. It's aggressive. It is what it is. It's barbaric and people want it to be nice. That's what it is."

The Browns will get some time to reassess their fading season before visiting New England in two weeks.

Mayfield said it's imperative he and his teammates turn their uneven start into a positive.

"Down the road, our plan is that it is going to be better for us in the long run and that is how we have to look at it."