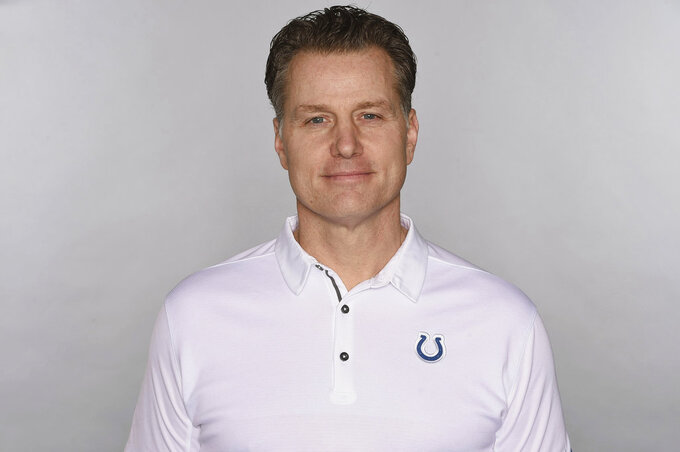 File-This is a 2018 file photo of Matt Eberflus of the Indianapolis Colts NFL football team. The Browns have interviewed Indianapolis defensive coordinator Matt Eberflus, who padded his coaching resume Saturday with an impressive playoff performance. Eberflus met with Cleveland general manager John Dorsey and other members of the Browns front office one day after his defense bottled up Houston quarterback Deshaun Watson in the Colts’ 21-7 win in an AFC wild-card game. (AP Photo)

CLEVELAND (AP) — Matt Eberflus has a past with the Browns. Maybe he'll have a future as well.

The 48-year-old Eberflus met Sunday with Cleveland general manager John Dorsey and other members of the Browns executive staff, which began its search by meeting with interim coach Gregg Williams on New Year's Day.

Cleveland has hired coaches who have worked with the team before. Mangini, Romeo Crennel and Rob Chudzinski were all assistants with the Browns before becoming head coaches.

Affectionately known as "Floos" by his players, Eberflus was one of the three assistants hired last year by Josh McDaniels, who agreed to become the Colts coach before changing his mind and staying in New England. General manager Chris Ballard promised to keep the new coaches before hiring Frank Reich, who didn't know Eberflus. But Reich was convinced to keep him and that decision couldn't have gone better.

Eberflus has worked wonders for a defense that underperformed for years. The Colts steadily improved and finished the regular season ranked No. 11 overall in yards and No. 10 in points. Last season, they ranked 30th in both categories.

Eberflus also managed to generate a pass rush despite that being a major concern. Also, Indianapolis has forced turnovers in 16 of 17 games.

In Saturday's win, the Colts sacked Watson three times, harassed him all game and got one interception.

Per league rules, the Browns had to wait until after the Colts played before they could interview Eberflus. If they want to hire him, they can't finalize a contract with him until the Colts' season ends. Indianapolis plays at Kansas City on Jan. 12.