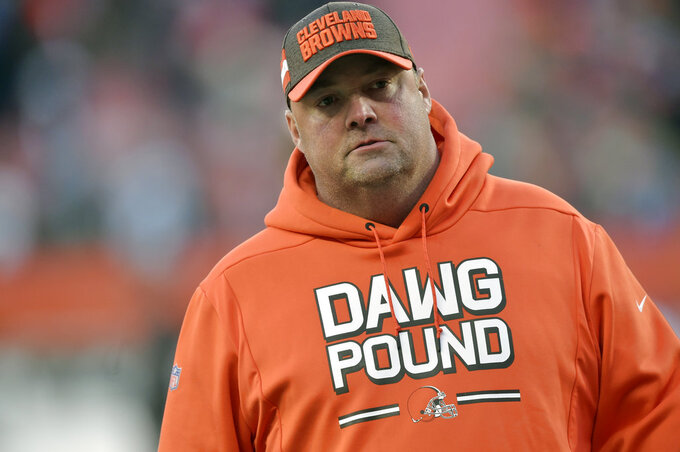 FILE - In this Dec. 9, 2018, file photo, Cleveland Browns offensive coordinator Freddie Kitchens walks on the field after an NFL football game against the Carolina Panthers in Cleveland. The Browns have interviewed Kitchens, who has already shown them what he can do with their offense. Kitchens took over game-planning and play-calling duties in October when Todd Haley was fired on the same day the club dismissed coach Hue Jackson. (AP Photo/David Richard, File)

CLEVELAND (AP) — Freddie Kitchens got his formal, sit-down interview with the Browns. He aced the on-field one.

Kitchens, who in eight weeks rose from unknown assistant to hot coaching commodity, became the seventh candidate to interview for Cleveland's juicy job on Monday. Kitchens met with members of the club's search committee led by general manager John Dorsey and including owner Jimmy Haslam, who were already impressed by what the 44-year-old did on an interim basis.

Kitchens jump-started the biggest turnaround season in club history and may now get the chance to do more — or stick around as the team's next offensive coordinator.

The Browns think so much of Kitchens that they've denied other teams permission to interview him. He's under contract, and if the club decides to hire another coach, it's clear they want Kitchens around.

He began the season coaching running backs before being promoted to coordinator when Haley and coach Hue Jackson were dumped following a loss in Pittsburgh. But once Kitchens got his hands on Cleveland's offense, nothing was the same.

The Browns improved in virtually every statistical category under Kitchens, who showed fearlessness and imagination in his play-calling. He employed a "Wishbone-type" backfield formation, had wide receiver Jarvis Landry throw several passes and had Mayfield pitch the ball to himself before completing a long TD pass in the season finale at Baltimore.

With Kitchens in charge, Cleveland's offense was balanced, unpredictable and exciting.

In eight games under Kitchens, Mayfield completed 68 percent of his passes, threw 19 TDs and just eight interceptions and was sacked only five times.

"He's moved the ball," Dorsey said last week when asked about Kitchens' impact. "He's gotten the ball out of the quarterback's hands quicker. He's put some flair and different route combinations together that help out the quarterback. I just think overall he's kind of moved the bar on the offensive side of the ball."

Kitchens never once campaigned to be Cleveland's coach, but said leading a team was his goal.

Kitchens' resume stacks up with any of the other candidates Cleveland has met with so far.

It's possible Dorsey will meet with former Packers coach Mike McCarthy, but no interview has been scheduled. The Browns are very familiar with McCarthy, who worked with Dorsey, assistant GM Eliot Wolf and vice president of player personnel Alonzo Highsmith in Green Bay.