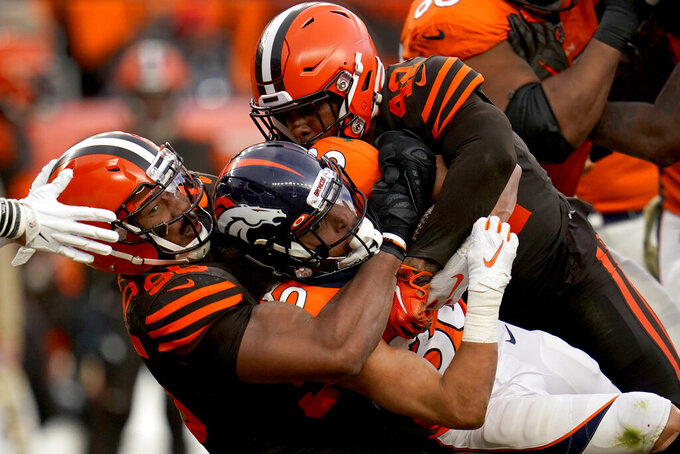 FILE - In this Nov. 3, 2019, file photo, Denver Broncos running back Phillip Lindsay, center, is tackled by Cleveland Browns defensive tackle Sheldon Richardson, left, during the second half of NFL football game, in Denver. While Myles Garrett serves his indefinite NFL suspension for hitting Pittsburgh quarterback Mason Rudolph over the head with a swung helmet, the Cleveland Browns have to find someone to hold down the star defensive end’s spot. (AP Photo/Jack Dempsey)

“It was not fair to Myles,” Landry said.

Garrett was banned indefinitely by the league for striking Steelers quarterback Mason Rudolph over the head with a helmet last week, the shocking act disrupting Cleveland’s season and intensifying an already heated rivalry with Pittsburgh.

Garrett had asked for a reduction of his unprecedented penalty — the longest for a single on-field act in league history. He was denied Thursday by appeals officer James Thrash, whose ruling came out shortly after a report surfaced that the Pro Bowl defensive end told the league Rudolph used a racial slur.

Garrett later stood by his claim, saying on Twitter: “I know what I heard.”

Thrash did reduce Steelers center Maurkice Pouncey’s suspension from three games to two for kicking and punching Garrett. One day earlier, Thrash upheld a one-game suspension for Brown defensive tackle Larry Ogunjobi, who pushed a helmet-less Rudolph to the ground in the melee.

On Friday, Landry and some other Browns players were trying to make sense of the discipline, saying it was hurried and one-sided. They also want to know why Rudolph escaped punishment.

“I still do feel like the league handled the process too quickly, made a decision too quickly,” Landry said. “With less than 24 hours, they made a decision. With the appeal process, you have a guy kicking and punching Myles, and he gets suspended, he gets a game taken off of his suspension? Then you have Larry who did way less than that. He still gets suspended for his game. So it makes no sense.

“Then you have a guy who's involved and pretty much instigated the whole thing, and nothing happens to him. It's almost like deliberately trying to like mess with Cleveland.”

The Browns have firmly supported Garrett from the outset, and that backing didn’t change following Thursday’s explosive revelation that race may have ignited the incident.

For the second straight day, Browns coach Freddie Kitchens would not divulge if Garrett told him Rudolph used a racial slur.

“I will not reconsider anything I have talked about with Myles Garrett, but I will say this about Myles’ character: if he tells me something, I am going to believe it,” Kitchens said.

Landry’s main complaint with the league is that its initial ruling came less than 12 hours after Garrett pulled off Rudolph’s helmet before swinging it and hitting the QB on top of the head.

Landry didn’t condone his teammate’s behavior, but he believes the league should have done a more thorough investigation.

“It’s about, I guess, protecting the shield and protecting the brand and all of that,” he said. “I just think that it was something that no one has seen as far as the use of a helmet, but fights and all of this stuff, they occur all the time in NFL games. I think just being prime time, national stage, the way that they responded with the suspension within 12 hours, it was just all video evidence.

“Nobody really had an opportunity to make a case of to say anything. The suspension was already done.”

“I don’t think he would lie about nothing like that, even in the situation that he’s in,” Richardson said.

Purely from a football perspective, Garrett’s loss is devastating to Cleveland’s defense. The 2017 No. 1 pick is overpowering, dominant and irreplaceable, a player capable of changing a game with a sack — and sometimes merely by his presence.

Now, he’s missing and the Browns don’t have anyone who can adequately fill his size 17 cleats.

“Myles is a once-in-a-generation player, so obviously not having a guy like that on the field is going to be hard,” said linebacker Joe Schobert, who was limited in practice Friday by a groin injury. “We’ve got other guys that can make plays. And as long as everybody on the defense knows their job, knows their role and their assignment, I have full confidence in everybody who’s going to be out there.”

Along with the suspensions of Garrett and Ogunjobi, the Browns will also be missing starting defensive end Olivier Vernon, who will miss his third straight game with a sprained knee. Those three have combined for 18 of the team’s 31 sacks.

Richardson is the team’s only healthy starter up front. Chad Thomas and Chris Smith are expected to start on the edges, with Devaroe Lawrence taking Ogunjobi’s spot inside next to Richardson.