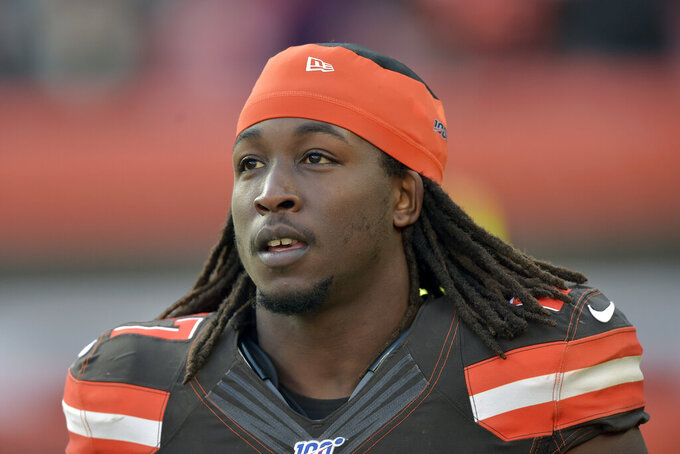 FILE - In this Nov. 24, 2019, file photo, Cleveland Browns running back Kareem Hunt walks on the field at halftime of an NFL football game against the Miami Dolphins, in Cleveland. Browns running back Kareem Hunt was cited for a traffic violation on Tuesday, Jan. 21, 2020, in Rocky River, Ohio and during the stop police officers found marijuana in his vehicle. (AP Photo/David Richard, File)

CLEVELAND (AP) — Browns running back Kareem Hunt was cited for a traffic violation, and police say they found marijuana in his car.

He was pulled over Tuesday afternoon in Rocky River, Ohio — on Cleveland's west side — while driving on Interstate 90. An incident report said officers smelled marijuana in the car.

Hunt, who was suspended eight games by the NFL last season for two physical altercations, was put in a police cruiser while his vehicle was searched. The report said police found a black backpack on the rear seat and “small amounts” of marijuana were found in three places. The marijuana was seized as evidence.

Hunt was cited for speeding only and released. There was no drug charge and no indication of how fast he was driving.

The Browns say they are aware of Hunt's situation and gathering more information. An NFL spokesman said “we are aware of the matter but will decline further comment.”

The 24-year-old Hunt was signed by Cleveland to a one-year contract last February, two months after he was released by Kansas City. The Chiefs cut him shortly after a video surfaced of Hunt shoving and kicking a woman at a Cleveland hotel. Hunt is from the Cleveland area.

Hunt expressed remorse and did not have any issues last season with the Browns. He rushed for 285 yards and one touchdown after serving his league ban. As a rookie, Hunt led the NFL with 1,327 yards in 2017.

He’s scheduled to be a restricted free agent in March.