Browns' Kitchens blocking out loud noise about his future 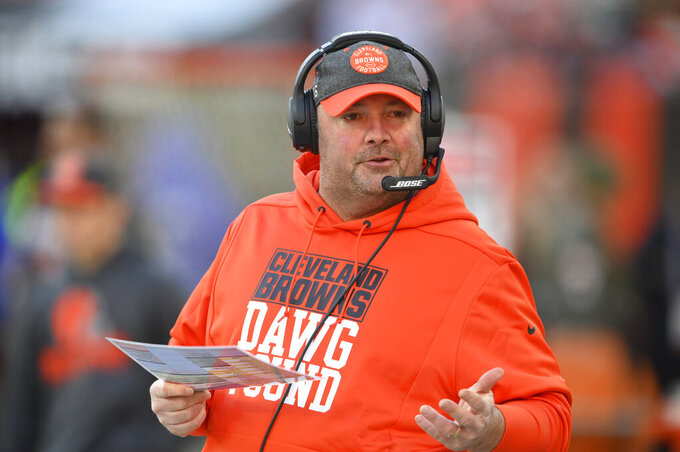 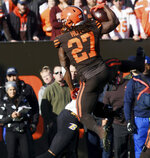 BEREA, Ohio (AP) — Like he instructs his players, Freddie Kitchens is trying to block out the noise.

The speculation about him as Browns coach has gotten loud.

Kitchens said Monday that he has not asked for any assurances that he'll be back next season after a disappointing first one with Cleveland.

“No," he said when asked if he's inquired with general manager John Dorsey or owners Dee and Jimmy Haslam about his job security. “I got assurance when I got hired. And, no, I haven’t and won’t. I’m doing my job today and I’ll continue to do the best job I can possibly do.”

Kitchens' future is in serious doubt with one game remaining as the Browns (6-9) have been perhaps the NFL's most underachieving team this season. They've not lived up to expectations and the first-year coach has been plagued by self-inflicted mistakes with play-calling and clock management.

Kitchens said Monday that he has received “total support” from Dorsey as well as the Haslams, and he's determined to finish out the season on a positive note as Cleveland heads into a meaningless finale at Cincinnati.

"I’m focused on doing my job right now and I think that’s where they want my focus,” Kitchens said. “I have not gotten anything but total support from those guys, and they want me to do my job and that’s what I’m trying to do on an everyday basis.”

The Browns were eliminated from playoff contention with Sunday's 31-15 loss to the Baltimore Ravens, and Kitchens did little to convince anyone he deserves more time after he made some questionable decisions late in the first half when Cleveland held a 6-0 lead and were outplaying the Ravens (13-2).

Kitchens stayed aggressive and the strategy backfired as the Browns gave up two touchdowns in the last 1:18 before halftime and never recovered.

He may be down to his final game, but there's still a chance Kitchens could survive if Dorsey and the Haslams feel continuity would serve the franchise best.

The Haslams have fired four coaches in eight years, and their reluctance to publicly support Kitchens could be another sign more change is coming.

Kitchens insists he's not focused on anything other than preparing his team.

The Browns have not made the playoffs since 2002, the league's longest current postseason drought.

Kitchens, though, believes they're close to putting it all together.

“Whenever we get those things flipped, it will change.”

Suspended star defensive end Myles Garrett has been at the team's facility for the past few weeks. The league allowed Garrett to rejoin his teammates, who are thrilled he's around.

Garrett was suspended indefinitely for striking Steelers quarterback Mason Rudolph on the head with a helmet on Nov. 14. Garrett was initially banned from the Browns headquarters, but the league is permitting him to meet with the medical and training staffs.

“It was probably good for him to be out of the building for a little while to just clear his head," Schobert said. “Hopefully not look at too much social media stuff and just reset and refocus because everybody in here knows the kind of guy Myles is, and when he’s in the locker room he only adds to the presence here.”

Decimated by injuries, Cleveland's defense gave up 481 yards to Ravens quarterback Lamar Jackson and the league's most high-potent offense.

Nick Chubb's one game away from becoming the first Browns back to lead the league in rushing in 51 years.

Chubb gained just 45 yards Sunday, and has 1,453 this season — the fourth most in team history. He heads into the finale leading Carolina’s Christian McCaffrey by 92 and Tennessee’s Derrick Henry by 124. The Bengals are giving up 153.9 yards per game and Chubb gashed them for 106 in a win on Dec. 8.

Schobert knows Sunday may have been his last home game with the Browns.

He's in the final year of his contract and Cleveland has not yet offered the steady linebacker a new one. The 26-year-old, who was drafted in the fourth round by the Browns in 2016, would love to stay but understands the business side.

“I don’t look too far ahead in the future that way, so we’ll see what happens,” he said. ”This is the place that gave me my chance in the NFL.”

A second meeting with the Bengals followed by perhaps another coaching change.