Browns' Kitchens hanging on to play-calling duties as coach

FILE - At left, in an Aug. 30, 2018, file photo, then-Arizona Cardinals head coach Steve Wilks looks on during the first half of a preseason NFL football game against the Denver Broncos, in Glendale, Ariz. At right, in a Dec. 18, 2016, file photo, then-Tampa Bay Buccaneers offensive coordinator Todd Monken walks along the sideline during an NFL football game against the Dallas Cowboys, in Arlington, Texas. New Browns coach Freddie Kitchens has hired Todd Monken as his offensive coordinator and Steve Wilks to run his defense. (AP Photo/File) 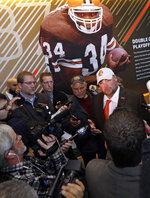 It will be again.

Kitchens said Monday he will continue to call plays as Browns coach despite hiring former Tampa Bay coordinator Todd Monken to oversee his offense next season.

Although he had little experience as a play-caller, Kitchens proved to be adept at reading defenses and designing plays during eight games as the team's interim coordinator in 2018.

Monken, who guided the NFL's top-ranked passing attack last season, called plays for the Buccaneers but agreed to surrender that role to work with Kitchens.

Since being hired by the Browns, Kitchens has been quickly assembling his staff, a chore he said "is the most important time for me as a head coach, it is the staff to build."

The 49-year-old Wilks was recently fired after going 3-13 in one season with the Cardinals. But he's got a deep defensive background, spending 12 years as a secondary coach before becoming Carolina's coordinator in 2017.

He succeeds Gregg Williams, who was not retained by Kitchens.

"When I see a guy that has a tremendous football acumen, is very diverse in his ability to use personnel, then why wait?" Kitchens said of hiring Wilks. "It is everything that I want, so we didn't wait. And I like guys that strive to be great and I think that Steve does that. I also like guys that strive to have an environment of learning and strive to have an environment of listening, being together and being a part of a team."

While his on-field coaching background is sound, Priefer was suspended by the Vikings in 2014 after an investigation into claims by former punter Chris Kluwe showed that Priefer made a homophobic remark during the 2012 season. Priefer later apologized and had his suspension reduced.

Browns general manager John Dorsey feels Priefer, who was born in Cleveland, has atoned for the misstep.

Mitchell spent the past two seasons as the Jets running backs coach. He played nine seasons in the league.