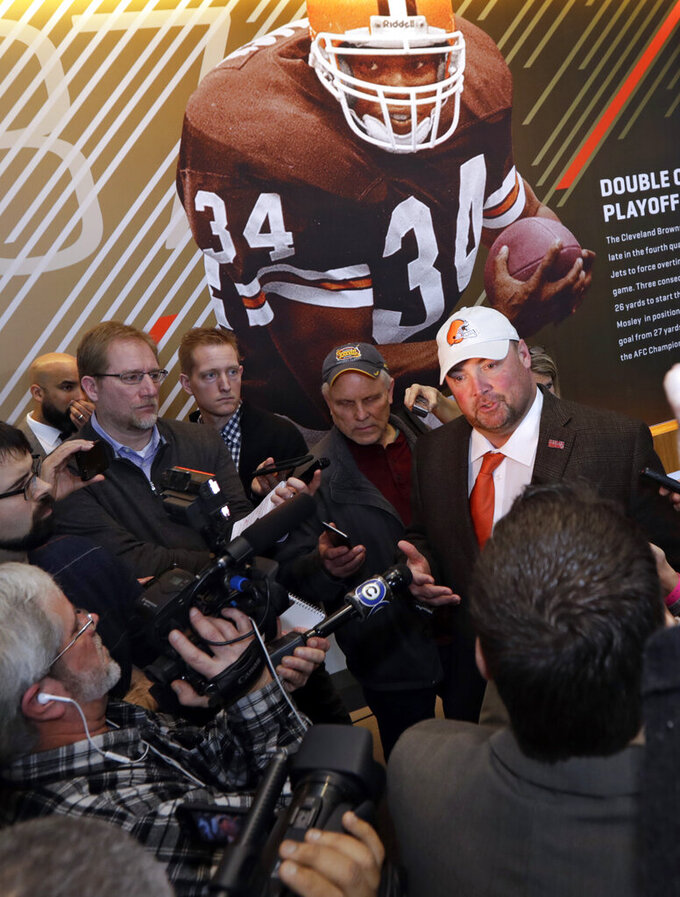 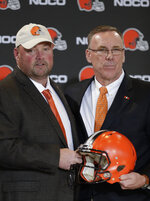 Shortly after he stopped playing quarterback at Alabama, where he started for three seasons, Kitchens spent his weekends washing FedEx trucks to supplement his income as a car salesman. When those Saturday afternoons in October and November that shaped his life ended, Kitchens worked to the sounds of his beloved Crimson Tide on the radio.

When the crowd roared, he ached.

"It almost brought me to tears listening to it," Kitchens recalled. "I knew I couldn't live without the game of football."

Two decades and six coaching stops later, he and the Browns are going on together.

The 44-year-old Kitchens, who grew up admiring his father's dogged work ethic, was introduced Monday as Cleveland's 17th full-time coach, completing a sudden, stunning climb up the NFL coaching ranks.

Despite his lack of any head coaching experience, the Browns selected Kitchens, who began last season as the club's running backs coach, over several other quality candidates primarily because of his unique ability to connect with people and a deep drive to win.

Trading his bright orange game-day "Dawg Pound" sweat shirt for a plaid sport coat, tie and Browns cap, Kitchens said he realizes he might not be viewed as the ideal candidate. Sitting at a podium across from large windows framing Cleveland's skyline, Kitchens politely praised owners Dee and Jimmy Halsam — "Mr. Jimmy and Miss Dee" — for their "guts" in picking him.

"I won't let them down. I know that I am not a popular choice," Kitchens said. "I understand that and I don't care."

Kitchens, though, endeared himself to Browns fans during his eight-game audition as the club's interim offensive coordinator. After he took over the offense in late October, the Browns — and especially rookie quarterback Baker Mayfield — clicked under Kitchens, who helped them win five of their last eight games and finish 7-8-1 after going winless in 2017.

Now that he's in charge of more than the offense, Kitchens has bigger plans.

"It drives me crazy that people are happy with 7-8-1," he said. "If I was in a different setting, my vocabulary would demonstrate that. That is not acceptable. Nobody here wants that. We all understand that it was an improvement, but under no circumstances is that ever going to be acceptable. We only have one goal here and that is to hoist the Lombardi Trophy.

Since agreeing to become Cleveland's coach last week, Kitchens has been busily assembling his staff. He added former Arizona coach Steve Wilks as his defensive coordinator and Todd Monken, who spent the past three seasons in Tampa Bay, will handle the Browns offense.

However, Kitchens will continue to call plays.

General manager John Dorsey said the team's coaching search committee met regularly for the past nine weeks to discuss candidates. As time passed, their list shrunk but every time it did, Kitchens' name was at the top of it.

Dorsey acknowledged the team had "really nice discussions" with former Green Bay coach Mike McCarthy, and that New England offensive coordinator Josh McDaniels' decision to back out on Indianapolis last year had no bearing on the Browns' interest in him.

There were several other coaches who got serious consideration, and the committee formally interviewed six other candidates. None of them though, was more impressive than Kitchens.

"We got it right," Dorsey said.

When Kitchens was hired a year ago, Dorsey couldn't have imagined that he would become Cleveland's next coach. But as the season unfolded, and after Kitchens called Cleveland's plays in the team's final exhibition game, Dorsey began to see him in a new light.

"Freddie is really good with people," he said. "You could see how much, even in his previous role, how much the players actually liked being around him. We walked away from the fourth preseason game in Detroit going, 'He just did that, didn't he?' And he made it look easy. Play-calling is an art and just when you sit and talk with him you just know. We knew it was the right decision."

While he has a new title, and more responsibility, Kitchens won't change.

There's a reason why he wanted to be in Cleveland.