Browns' Landry ahead of schedule in rehab from hip surgery 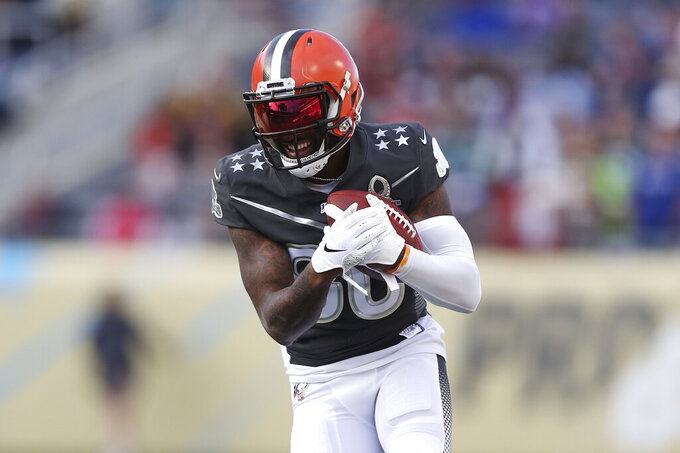 In this Jan. 26, 2020 photo AFC wide receiver Jarvis Landry, of the Cleveland Browns, runs the ball up the field during the NFL Pro Bowl football game against the NFC in Orlando, Fla. The Browns wide receiver has made the most of being quarantined the past two months and said he's ahead of schedule as he recovers from off-season hip surgery. Landry, who has never missed a game in his NFL career, said on a Zoom call Wednesday, May 20, 2020 that his rehab has gone well and that he envisions being back in the field in August _ assuming players are allowed in the wake of the COVID-19 pandemic. (AP Photo/Steve Luciano)

Landry, who opted for surgery in February after being slowed by an injury last season, said on a Zoom call Wednesday that his rehab has gone as well as expected and he's “a little bit” ahead of schedule.

Landry envisions being back on the field in August — assuming players are allowed to return in the wake of the COVID-19 pandemic.

“Rehab process is going great,” Landry said from his Florida home. “It’s just a little difficult obviously, just some of the modality type of things I’ve been doing that obviously with quarantine and everything I haven’t been able to have access to. So that’s kind of been the toughest part of it.

"Right now I’m a little bit ahead of schedule, but the most important thing right now is taking it day by day. I can’t predict when exactly I’ll be on the field, whether that’s July, August or September. But obviously my return date is sometime in August.”

Landry didn't miss a game last season despite a hip injury that flared up in training camp. The 27-year-old has never missed a game since breaking in with Miami in 2014 and said he's determined to keep his streak intact.

“That’s one of the goals that I would set out for myself since I was a kid watching ‘Monday Night Football,’” he said. “And it’s still something that’s in the back of my mind. Obviously I want to make sure that I’m going through this process the right way, too, and making sure that I’m healthy enough to be able to go out there and help the team win games and not hurt the team.”

During the shutdown because of the virus outbreak, Landry has stayed in touch with good friend and teammate Odell Beckham Jr., who had surgery in January for a core muscle injury.

“We’ve been Face-Timing,” Landry said. “We’ve been kind of documenting our whole process of recovery and sending it back and forth to each other. Obviously right now, it’s a crucial time in our recovery stages of getting our strength back. The healing process is kind of done. Now it’s time to make sure that everything’s working together.”

NOTES: The Browns signed two 2020 draft picks: TE Harrison Bryant and WR Donovan Peoples-Jones to their rookie contracts. Bryant, the John Mackey Award winner last season from Florida Atlantic, was taken in the fourth round while People-Jones, who played at Michigan, was drafted in the sixth round. Landry and Peoples-Jones became friends before the draft and Landry has been impressed with his new teammate. “He has a lot of questions, which I admire about him,” Landry said. “He’s asking me about punters. He’s asking me about the team. He’s asking me about guys on the team. I see already he’s a hard worker. I see that he’s eager to learn.”