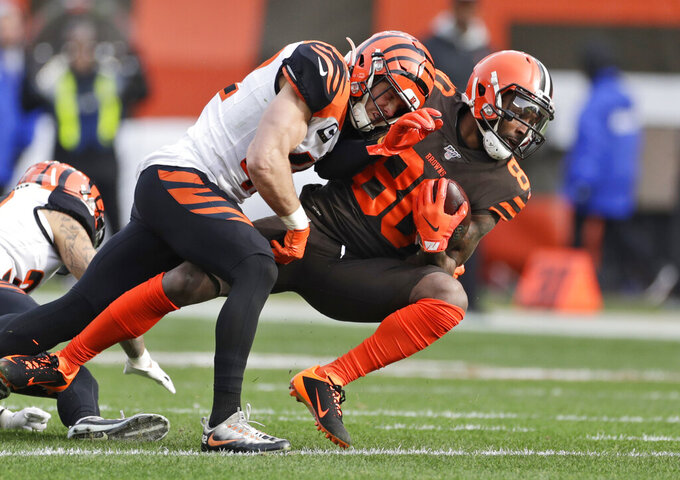 BEREA, Ohio (AP) — Jarvis Landry has been plagued by hip pain since the Browns reported to training camp in late July.

The Pro Bowl wide receiver revealed the origin of his injury Thursday.

Landry said he was diagnosed with a fractured bone at the base of his spine early in the summer, limiting his practice time throughout this season and potentially requiring surgery to correct the problem.

“Just talking to the doctors and the early scans from OTAs, I began with a fractured sacrum and then, from there, everything else just kind of started going bad,” the 27-year-old said.

“My hip has been bothering me since then and it’s definitely been a battle. I wouldn’t say it’s gotten worse — I’d call it nagging — but it definitely is not getting better.”

The sacrum consists of two vertebrae that form a large triangular bone at the bottom of the spine, acting as a wedge between the hip bones. Fractures are typically accompanied by significant hip, back or groin pain.

Landry has played in all 15 games, leading the team with 81 receptions, 1,092 yards receiving and five touchdown catches. He earned his fifth Pro Bowl selection in six seasons — two straight since joining Cleveland in a 2018 trade with Miami — and continues to demonstrate strong chemistry with quarterback Baker Mayfield.

The most important number to Landry, however, is zero. The Louisiana State product has never missed a regular-season game and intends to extend his streak to 96 in a row when the Browns play at Cincinnati in their finale Sunday.

“I think doing the right things throughout the week has allowed me to get to Sunday and just give the best that I have.”

To that point, the 5-foot-11, 196-pounder will postpone visiting a hip specialist until next week. His logic is twofold: Landry doesn’t want to learn the severity of his condition, nor does he want a doctor to do so, because it might prevent him from playing against the Bengals.

“Honestly, I have no real, true diagnosis at this point,” said Landry, whose 562 receptions are the most in NFL history through six seasons. “All I know is we have another opportunity this week. We are playing to go out there and compete to win. That’s why we play this game.”

Cleveland (6-9) was eliminated from playoff contention last week and is assured of finishing with a worse record than the 7-8-1 it posted in 2018, exponentially turning up the heat on first-year coach Freddie Kitchens.

Landry and Mayfield both said they aren’t thinking about a potential coaching change, but are determined to beat Cincinnati (1-14) and help wide receiver Odell Beckham Jr. collect 46 yards receiving to reach 1,000 on the year.

Bengals coach Zac Taylor expects nothing less than their best.

“Jarvis is one of the fiercest competitors I’ve ever seen in my life,” said Taylor, a former quarterbacks coach and offensive coordinator with the Dolphins. “I can’t remember how many years we were together in Miami, but we were always really impressed with the way he approached Sundays and the expectations he had for himself. He’s a fierce competitor.”

NOTES: DE Olivier Vernon (knee) has missed six of the last seven games, but Kitchens said “he’s got a chance” of seeing action. ... Kitchens said RB Dontrell Hilliard (left knee), who suffered a season-ending injury in Week 16 against Baltimore, is not expected to need surgery. … Pro Bowl RB Nick Chubb was chosen team MVP by reporters who cover the Browns. The second-year pro has an NFL-best 1,453 yards rushing, 92 more than Carolina’s Christian McCaffrey. ... DT Sheldon Richardson, who is with his fourth team since 2016, was chosen as the Good Guy Award winner. … Kitchens plans on conducting player exit interviews Monday.