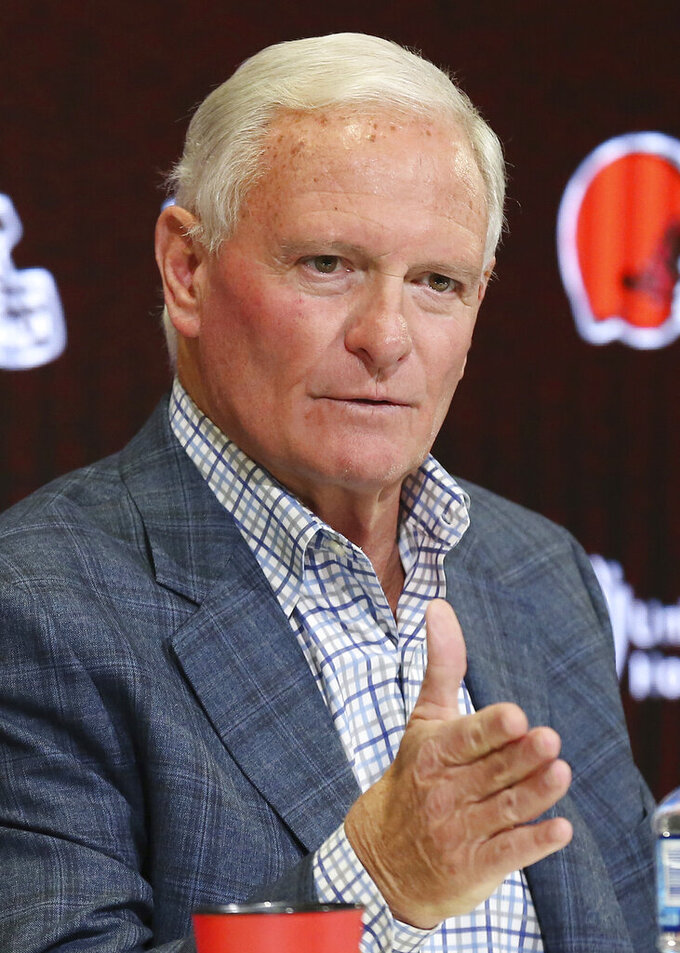 Cleveland Browns owner Jimmy Haslam addresses the media on the recent changes in the organization's coach and general manager positions, Thursday, Jan. 2, 2020, in Berea, Ohio. The Browns kicked off their latest quest to find a coach, and also a general manager, by interviewing former Packers coach Mike McCarthy. (John Kuntz/cleveland.com via AP)

CLEVELAND (AP) — The Browns are the only team looking for a coach. That should make finding one a little easier.

With the Carolina Panthers and New York Giants completing coaching hires on Tuesday, Cleveland's job vacancy will be the last NFL opening filled. It's still unclear how quickly that will happen.

The Browns, who fired Freddie Kitchens after just one season, are in the second week of interviews and have scheduled meetings this week with Patriots offensive coordinator Josh McDaniels and Vikings coordinator Kevin Stefanski. Cleveland has also asked the Philadelphia Eagles permission to interview defensive coordinator Jim Schwartz, who like McDaniels, has head coaching experience.

Stefanski was a finalist for Cleveland' job a year ago. He has a busy week with the Vikings playing San Francisco on Saturday in the second round of the playoffs.

All of those interviews could be moved up now after the Panthers agreed to terms with Baylor coach Matt Rhule and the Giants decided on Patriots special teams and wide receivers coach Joe Judge.

Things seem to be happening fast.

Cleveland's choices have shrunk considerably over the past 24 hours after Mike McCarthy, the first candidate to interview with the Browns, was hired by the Dallas Cowboys. The former Packers coach was believed to be at or near the top of the wish list for owner Jimmy Haslam, who has had plenty of practice with coaching searches.

Rhule and Judge were not thought to be targets for Cleveland, but their signings in Carolina and New York changed the available talent pool.

McDaniels, too, has long been considered a favorite of Haslam, who has asked Cleveland's fan base to be patient while he's displayed none himself. This is Haslam's sixth coaching search since he and his wife, Dee, bought the franchise from Randy Lerner in 2012.

The 44-year-old McDaniels may be itching for a second shot at head coaching after a failed run with the Denver Broncos in 2009-10. McDaniels went 11-17 before being fired and it was a humbling experience for the highly regarded coordinator, who has spent the past eight seasons running Bill Belichick's offense and working with quarterback Tom Brady.

Haslam wants to hire a coach before turning his attention on finding a new general manager after John Dorsey's sudden departure after two seasons. Haslam said his new coach will have major input into the hiring of the next GM.