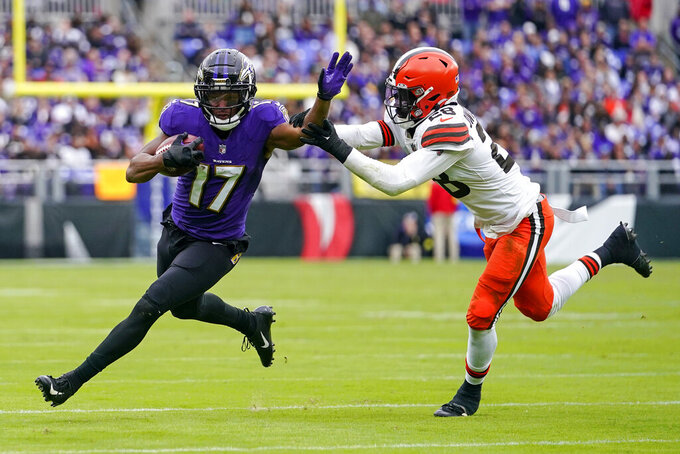 Baltimore Ravens running back Kenyan Drake (17) is stopped by Cleveland Browns linebacker Jeremiah Owusu-Koramoah (28) after a catch in the second half of an NFL football game, Sunday, Oct. 23, 2022, in Baltimore. (AP Photo/Julio Cortez)

Owusu-Koramoah injured his knee last week in Baltimore while having his best game this season. He had two tackles, broke up a pair of passes and forced a fumble in Cleveland's 23-20 loss.

The second-year linebacker from Notre Dame didn't practice all week and was listed as questionable coming into the game. His absence will likely mean more snaps for Deion Jones, acquired in a trade two weeks ago from Atlanta.

Cincinnati's secondary will be missing a starter as cornerback Eli Apple (hamstring) is out. He'll be replaced by Cam Taylor-Britt, who will make his first NFL start.

The Browns (2-5) promoted linebacker Dakota Allen from the practice squad to add depth to a unit that has been hit hard by injuries. Both captain Anthony Walker Jr. (quadriceps) and starter Jacob Phillips (pectoral) are out for the rest of this season.

Ward will miss his third straight game with a concussion sustained on Oct. 9 against the Los Angeles Chargers. He remains in the NFL's protocol with at least his third known concussion in five seasons.

The Browns will have starting cornerback Greg Newsome, who didn't practice two days this week with an oblique injury.

Burrow is missing top receiver Ja'Marr Chase, who could miss several games with a hip injury.

Coach Zac Taylor said on Saturday that Chase will not be placed on injured reserve.