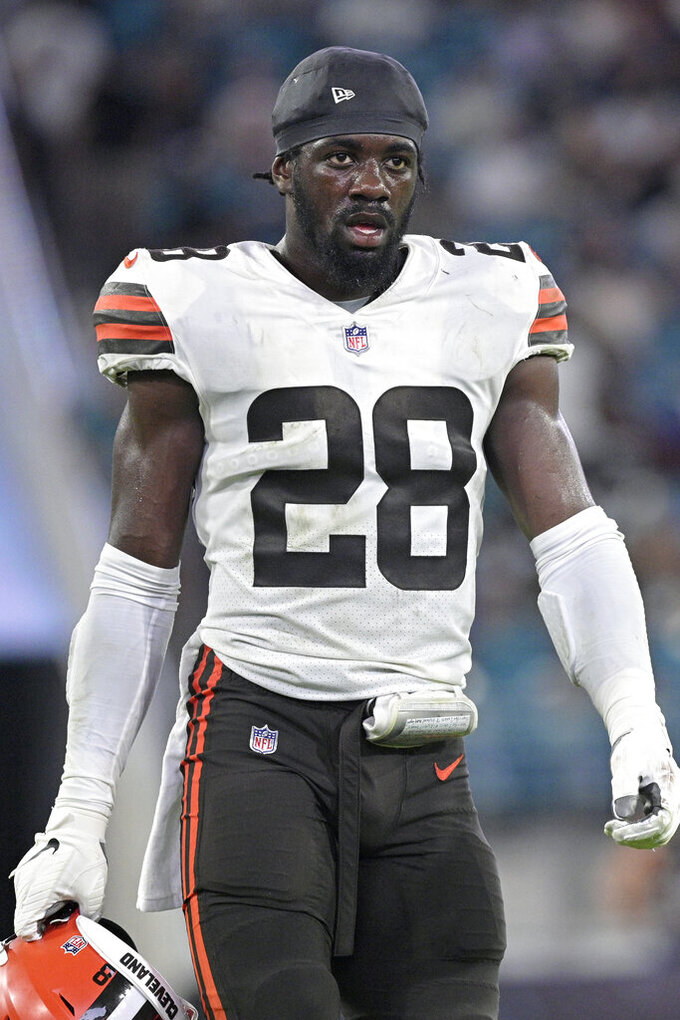 FILE - Cleveland Browns linebacker Jeremiah Owusu-Koramoah (28) walks onto the field during the second half of an NFL preseason football game against the Jacksonville Jaguars in Jacksonville, Fla., in this Saturday, Aug. 14, 2021, file photo. Browns rookie linebacker Jeremiah Owusu-Koramoah was released from a Los Angeles hospital and cleared to travel after being treated and evaluated for a bruised throat. Owusu-Koramoah got hurt in the second half of Sunday's, Oct. 10, 2021, 47-42 loss to the Los Angeles Chargers. He was taken to a hospital near SoFi Stadium in Inglewood, Calif., according to a team spokesman. (AP Photo/Phelan M. Ebenhack, File)

CLEVELAND (AP) — Browns rookie linebacker Jeremiah Owusu-Koramoah returned to Ohio after suffering a throat bruise in Sunday's game against the Chargers and being evaluated and treated at a Los Angeles-area hospital.

Owusu-Koramoah got hurt in the first quarter of a 47-42 loss to the Los Angeles Chargers. He was taken to a hospital near SoFi Stadium, released Sunday night and landed back in Cleveland on Monday, according to a team spokesman.

The second-round draft pick from Notre Dame appeared to get hurt while making a tackle. He struggled getting to the sideline and dropped to one knee while grabbing at his throat area.

Owusu-Koramoah played 68 of 75 defensive snaps. He finished with four tackles and forced a fumble in his most action this season.

The Browns were already missing a few starters and then suffered numerous other injuries in the back-and-forth game, which featured seven lead changes and the Chargers scoring 26 points in the fourth quarter.

Starting right tackle Jack Conklin (knee) was forced out in the second half and was replaced by rookie James Hudson. The Browns played without starting left tackle Jedrick Wills Jr., who sat out with a nagging ankle injury. Blake Hance started for Wills.

Cleveland's secondary also took some hits as cornerbacks Denzel Ward (neck) and Greedy Williams (shoulder) got hurt along with backup safety M.J. Stewart (hamstring). They were scheduled to undergo MRIs on Monday, but coach Kevin Stefanski said he had not gotten full medical reports.

Stefanski did not want to speculate on whether any of the injuries are long term.

“I don’t think that it’d be appropriate for me to say yet,” he said. "I gotta see what the MRIs say.”

Defensive end Jadeveon Clowney missed Sunday's game as well. Stefanski said Clowney, who sat out two practices last week with an elbow injury, was held out because his knee stiffened during pregame warmups.

Wide receiver Jarvis Landry is eligible to return from injured reserve this week after missing three games with a sprained knee suffered on Sept. 19 against Houston. Stefanski didn’t know if Landry will return to play Sunday when the Browns host the unbeaten Arizona Cardinals (5-0).

Also, Stefanski said it was too early to know whether Wills or starting rookie cornerback Greg Newsome II will be back this week. Newsome has missed the past two games with a calf injury.