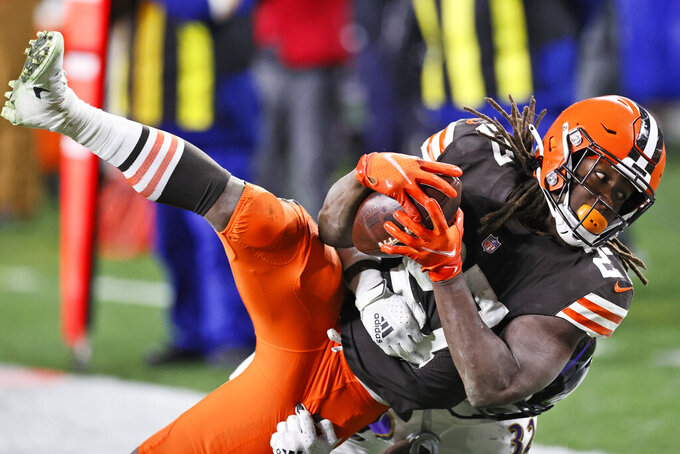 Cleveland Browns running back Kareem Hunt scores a 22-yard touchdown after a pass during the second half of an NFL football game against the Baltimore Ravens, Monday, Dec. 14, 2020, in Cleveland. The Ravens won 47-42. (AP Photo/Ron Schwane)

CLEVELAND (AP) — On their way to likely ending the NFL's current longest playoff drought, the Browns are learning lessons every week.

Some of them are tougher than others.

While showing resilience, toughness, grit, and all the other coaching cliches, against Baltimore in a 47-42 loss that may have been the league's best game of 2020 — Ravens coach John Harbaugh overstated that it was “one of the greatest games in history” — the Browns failed to rise to the moment.

"I would hope we are better the next time we are in that situation,” coach Kevin Stefanski said.

Cleveland couldn't stop Lamar Jackson in the first half or again when the league's reigning MVP returned after being sidelined with cramps. He threw a touchdown on a fourth-down play and drove the Ravens into Justin Tucker's range for a 55-yard field goal with 2 seconds left.

Jackson's heroics kept the Ravens (8-5) in the playoff picture while denying the Browns (9-4) a 10th win that would have given them their best record after 13 games since 1969.

More importantly, the loss showed the Browns that they still aren't among the AFC's elite.

Maybe one day, but not yet.

“I do not look at it as necessary," Stefanski said, disputing the loss as an inevitable growing pain for a young team. "There are plays that have to be made. If you are going to try and go win a game versus a good football team, you are going to have to go make a few plays.

"I can help with better calls. All of that, we all have to be a little better.”

But there were positive signs, the most significant being quarterback Baker Mayfield's continued growth.

Mayfield shook off his first interception after 187 straight passes without one and rallied the Browns from a 14-point deficit to briefly take the lead.

On three consecutive touchdown drives, Mayfield completed 11 of 14 passes with two TDs — and he ran for the other, punctuating his score with a baseball slide in the end zone before rifling the ball off a nearby retaining wall.

“Baker is obviously playing at a high level,” Stefanski said. “He does not lack confidence, and I say that in a good way. That is who he has always been, which is great. I think what you are seeing is the comfort level is certainly growing.

"That also goes back to all of the work he puts into this. He is a get-in-early, stay-late type of player, grinds on it and gets extra work out on the practice field. You are just seeing all of the fruits of his labor.”

Offensively, the Browns can do damage by ground or air.

With Stefanski blending his running game and passing attack, the Browns rolled up 493 yards and picked up 33 first downs. They eclipsed 40 points for the second straight game, the first time a Cleveland team has done that since 1968.

“I just felt there were a few times where we got in our own way, and that is really not us,” he said. "We have to play a clean game for 60 minutes.”

The battered secondary was again guilty of giving up big plays at the worst possible times. Jackson found soft spots in Cleveland's zone, and the Browns were unable to get the Ravens' evasive QB on the ground when they had chances.

Mayfield is quieting his critics weekly.

For the second straight game, he played well against a Super Bowl contender, finishing with season highs in completions (28) and yards (343).

Mayfield has eight TD passes and the one pick in his past three games. There is still plenty of room for improvement, but he's seeing the entire field and when he's in trouble, Mayfield is throwing the ball away.

Kicker Cody Parkey's missed field goal and extra point were critical — four points in what was a three-point loss until the Browns attempted a series of laterals in the final seconds that resulted in a Baltimore safety — and a bad beat for gamblers who took Cleveland and the points.

Stefanski dismissed that Parkey had a “foggy” look in his eyes before the kicks. He's 17 of 20 on field-goal attempts and 37 of 39 on PATs.

“He missed a couple of kicks,” Stefanski said. "He came back and made one where we were counting on him. He knows that.”

Safety Andrew Sendejo suffered a concussion when he collided with Ravens running back J.K. Dobbins on a late 2-point conversion.

7 — Incredibly, the Browns fumbled seven times and didn't lose any of them. Receiver Rashard Higgins was stripped on consecutive plays in the first half — he got one back and the other went out of bounds.