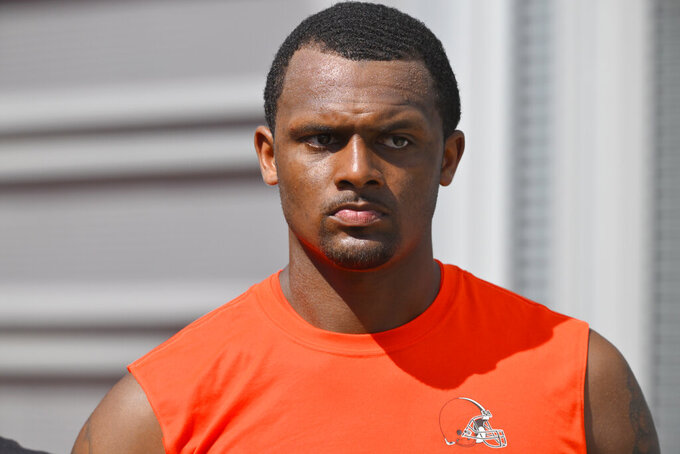 CLEVELAND (AP) — When owners Dee and Jimmy Haslam returned from Houston in March with Deshaun Watson under contract, the Browns' long search for a franchise quarterback — a fruitless 20-year odyssey — appeared to be over.

Cleveland's in a muddle. Again.

The NFL's decision to appeal the six-game suspension for Watson handed down by independent arbiter Sue L. Robinson, who ruled he violated the league's personal conduct policy, has left the Browns in limbo and potentially considering other QB options for the 2022 season.

An appeal hearing is next. There's also the possibility of a settlement or lawsuits followed by a prolonged court fight.

Only days ago, the Browns, who have started a league-high 32 quarterbacks since their 1999 expansion rebirth and traded former No. 1 overall pick and four-year starter Baker Mayfield to Carolina last month, were prepared to be minus Watson for less than half this season.

Now, it's likely he'll be out much longer, and there's no telling when Watson will be on the field again.

With a talented, ready-to-win-now roster, the Browns were poised to contend for the AFC title with Watson. Without him, well, they won't.

Coach Kevin Stefanski has insisted backup Jacoby Brissett, who has made 37 starts as a pro and been something of a super sub during previous stops in New England, Indianapolis and Miami, would be the starter if Watson was suspended.

However, that was before it became evident Watson's suspension will be lengthier. On Thursday, Commissioner Roger Goodell chose former New Jersey Attorney General Peter C. Harvey, with an extensive background dealing with league matters, to have final say on Watson's discipline.

While Brissett is a solid placeholder and could probably win some early games, especially with Cleveland's schedule front-loaded with softer opponents, he's not a full-season replacement for a team capable of making a deep playoff run, when the Browns would go up against some of the conference's elite QBs.

The clock is ticking for the Browns.

They can't afford to throw away a season with star defensive end Myles Garret and Pro Bowl running back Nick Chubb in their primes, two-time All-Pro right tackle Jack Conklin in his final year under contract and end Jadeveon Clowney only on a one-year deal.

They're in their winning window.

So, while Cleveland's players had Thursday off during their second week of training camp, some of the conversation within team's headquarters may certainly have included whether or not to make a move for another QB.

The Browns recently signed veteran Josh Rosen to give them more depth along with Josh Dobbs, but neither of them seems ready to take over in the event Brissett went down and neither has been impressive so far in camp.

Jimmy Garoppolo's unfolding situation in San Francisco bears watching. With the 49ers committing to Trey Lance as their starter, Garoppolo, who has been previously tied to the Browns, could be an option.

It's unlikely the Browns would trade for Garoppolo, but general manager Andrew Berry might jump at the chance to sign him if San Francisco waives the 30-year-old to avoid paying him $24.2 million this season.

Garoppolo is a proven winner (33-14 as a starter), would be an upgrade over Brissett and could be a bridge to Watson's return.

This week marked the 10th anniversary of the Haslams agreeing to buy the Browns from Randy Lerner for $1.05 billion. It's been a dismal decade checkered with failure and almost constant turmoil and turnover.

They've hired five full-time coaches and five GMs. The Browns have gone just 52-108-1 and had one winning season in the Haslams' tenure. There was also the failed Johnny Manziel experiment, an 0-16 season and now the Watson saga.

It all looked so promising four months ago, when the Haslams met with Watson and convinced him Cleveland was where he belonged. They enticed him to waive his no-trade clause with a fully guaranteed five-year, $230 million contract, a historic deal that didn't sit well with their NFL peers.

It doesn't seem prudent at the moment.