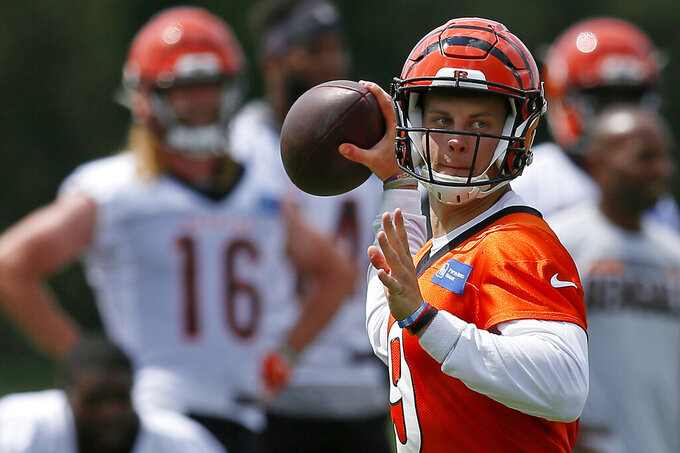 They're focused on quenching another — a first division title since 1989.

Not since the AFC Central underwent a name change in 2002 and became the AFC North has Cleveland finished ahead of division rivals Pittsburgh, Baltimore and Cincinnati in the same season.

It's taken time, but the Browns have climbed the ladder.

Coming off their first playoff appearance since 2003, first postseason victory in 26 years and featuring one of the NFL's most potent offenses along with a remodeled defense led by All-Pro end Myles Garrett, the Browns are primed to do big things this season.

Just four years since going 0-16, they are more than legitimate.

“Our goal is to win a Super Bowl,” said quarterback Baker Mayfield. “If we don’t set out to do that every year, then I think you’re doing it for the wrong reasons.”

Last year, three of the AFC's seven playoff teams came from the North and there's a good chance that could happen again with the Browns, Ravens and Steelers all capable of double-digit win totals.

The Bengals have some work to do.

In Baltimore, sensational quarterback Lamar Jackson has a stronger group of play-making receivers that should stretch defenses and give him even more room to run and embarrass would-be tacklers.

Pittsburgh's taking one last ride with 39-year-old Ben Roethlisberger before he hangs up his cleats. The Steelers will again rely on their defense to keep them in games.

Cincinnati's hopes rest with second-year QB Joe Burrow, who suffered a season-ending knee injury in Week 11 last season. He's made a swift recovery, but will have to hope Cincinnati's line does a better job protecting him.

With the Browns' ascension, the AFC North is maybe tougher and deeper than ever.

It didn't take safety John Johnson III, who signed as a free agent with Cleveland after four seasons in the NFC West as a key member of the Los Angeles Rams, to appreciate the North's nastiness.

“This division, big-boy pads,” he said. "I don’t think I’ve seen a fullback in my life until now. I’m not used to tight ends. I’m not used to fullbacks. It was all wide receivers (in the West) and passing so it’s a little different.

BIRDS OF A FEATHER

The Ravens ranked first in the NFL in rushing last season, last in passing.

That’s partly because Jackson is such a dynamic threat on the ground, but the Ravens did try to revamp their passing game, signing receiver Sammy Watkins and drafting Rashod Bateman.

It hasn’t been the smoothest training camp for Baltimore. Jackson missed the beginning after a positive COVID-19 test. Then, running back J.K. Dobbins went down with a season-ending knee injury in the preseason finale.

“You just have to approach it and overcome it,” coach John Harbaugh said. “It’s adversity and we’ll have to deal with it, and we will. We have the players to do it.”

Bateman has dealt with groin problems, and receiver Marquise Brown has been limited by hamstring issues. It remains to be seen how these injuries have affected Baltimore’s preparation.

This is still a team that’s gone 25-7 over the past two regular seasons.

Roethlisberger is back for an 18th season, surrounded by a sea of new faces in the huddle as the defending division champions try to make another — and perhaps final — Super Bowl push with their longtime QB.

The Steelers have filled the gaps through the draft — including using their first-round pick on former Alabama star back Najee Harris — and taking fliers on veterans such as guard Trai Turner.

Throw in Matt Canada’s promotion from quarterbacks coach to offensive coordinator and a schedule that on paper ranks as the NFL’s toughest and Pittsburgh will have its work cut out trying to provide a storybook finish for Big Ben.

Despite the flashes of excitement Burrow generated in 2020, the Bengals’ season quickly slid off a cliff.

Running back Joe Mixon injured his foot, and Burrow — who was making a case for AP Offensive Rookie of the Year — went down with a torn ACL and MCL. Other key players were in and out with injuries, and players had to be signed off the street.

With both Joes healthy in 2021, the addition of elite receiver and Burrow’s former LSU teammate Ja’Marr Chase, and upgraded offensive and defensive lines, there is reason for optimism.

Coach Zac Taylor is 6-25-1 in his first two years. Cincinnati ownership has expressed support, but Taylor certainly is feeling the heat to produce.

“We feel like on paper we’ve got a good group, but we’ve done nothing on the field to earn anyone’s respect,” Taylor said. “That just starts with what we can get done in practice and get ready for these games and be ready for Week 1.”