Browns' Mayfield not fueled by college rift with Cards coach 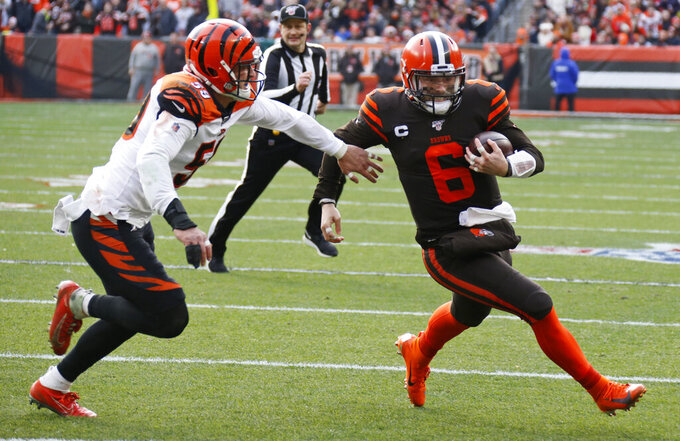 Cleveland Browns quarterback Baker Mayfield (6) rushes for a 7-yard touchdown during the first half of an NFL football game against the Cincinnati Bengals, Sunday, Dec. 8, 2019, in Cleveland. (AP Photo/Ron Schwane) 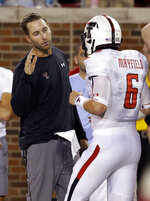 However, it appears the Browns quarterback has forgiven one of his former college coaches.

“It’s in the past,” Mayfield said Wednesday of his issues when he played at Texas Tech for Kingsbury, Arizona's first-year coach. “What happened happened, and we move forward.”

With the Browns (6-7) set to play against the Cardinals (3-9-1) this Sunday, Mayfield was asked to dredge up some old hostilities between him and Kingsbury, who may be indirectly responsible for Mayfield winning a Heisman Trophy and becoming a No. 1 overall pick in the NFL draft.

For a long time, Mayfield carried a grudge against Kingsbury. He's fumbled it.

“It’s a long time ago,” Mayfield said following practice. “We’ve talked since, played against him a few times since and so it’s exactly that, we’re in a good place. Obviously he’s trying to beat me this week, I’m trying to beat him.”

But any perceived hatred between the pair has been replaced by a healthy respect.

Mayfield was a walk-on at Texas Tech when Kingsbury, who starred as a QB at the school, was one of college football's rising coaching stars. Their strong relationship became fractured after Mayfield got hurt during his freshman season in 2013 and Kingsbury reopened the quarterback competition before the team played in a bowl game.

Their communication problems, along with Mayfield saying he was told that Texas Tech had no plans of offering him a scholarship, drove him to Oklahoma, where he thrived. Mayfield rewrote record books over three seasons with the Sooners and became a trash-talking, touchdown-throwing household name.

Looking back, both Mayfield and Kingsbury said their feud could have been avoided. Both also feel their relationship is now OK.

What happened happened and it was unfortunate,” Kingsbury said on a conference call with Cleveland reporters. “I obviously wish it would’ve been different and I could’ve handled things differently. But you move forward and I’ve been proud of his success, and what all he’s accomplished.”

Mayfield, who has had an uneven second season as a pro, has always used past personal beefs, slights or criticism as motivation. He walks around with a bag of chips on his shoulder.

Whether it's a defensive player, opposing coach, taunting fan, critical media member or anyone who has doubted him, Mayfield turns any negativity to fuel his fire.

It's made him who he is.

“He’s really competitive and he’s been pretty much doubted his entire life and he’s used that as motivation and used it successfully,” Kingsbury said. “So I don’t really know why he would change. I’m sure people are going to love you, they’re going to hate you regardless of how you motivate yourself, but it works for him and he’s proved people wrong at every level.”

Over the past few years, Kingsbury and Mayfield were able to work through some of their differences with conversations at numerous events. They even spent time together at this year's Kentucky Derby.

Kingsbury said those opportunities have helped them better understand each other and brought them to where they are now.

“He and I never really had a negative face-to-face type confrontation or anything of that nature,” Kingsbury said. "It was just a deal that that happened and I think we both had a certain amount of respect for each other and what we’re about and who we are. And sometimes it just takes time to get back to that point.”

While Kingsbury couldn't have forecast Mayfield's rise from two-time walk-on to franchise quarterback, the Browns QB said he always felt the coach was destined to make the leap to the NFL.

Kingsbury took the "Air Raid” offense he ran while playing for Mike Leach at Texas Tech, made some tweaks and now the fast-paced, multiple-receivers system can be seen all over the pro game.

“He is a brilliant offensive mind,” Mayfield said. "Players love playing for him. I know that just from personal experience obviously, and they adapt to what he does.”

Mayfield's strong compliment of Kingsbury almost seemed out of character for the 24-year-old, whose outspokenness has been a problem. As recently as Sunday's post-game news conference, he created controversy when he questioned the Browns' medical staff's handling of wide receiver Odell Beckham Jr.'s groin injury.

Mayfield knows he's still got some growing up to do, and that maybe mending fences in talking with Kingsbury helped him mature.

"Those are conversations that we have had and so we have both acknowledged that an 18-year old Baker was not the all-knowing that he thought he was, and just having a conversation goes a long way,” he said.

NOTES: Mayfield said he talked with people “in the building” he may have offended with his remarks about Beckham's injury and is confident things have been cleared up. ... As for Beckham, whose future in Cleveland has become uncertain, Mayfield said he's heard the rumors the receiver wants out, "but I have had my conversations with him and I know what we talk about so I trust him wholeheartedly.”